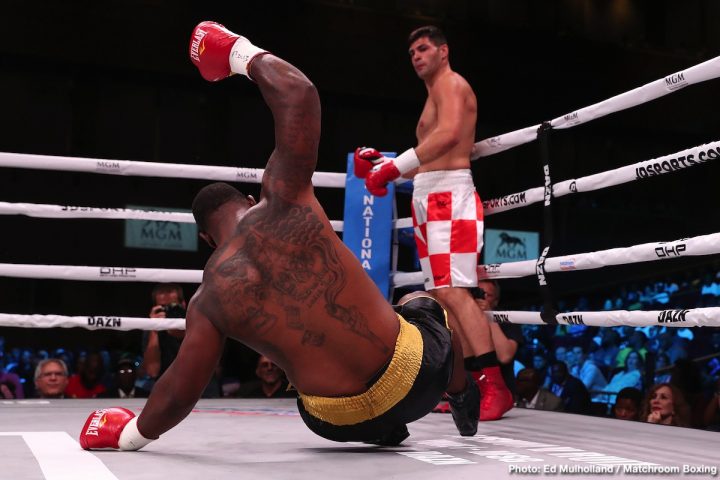 By Charles Brun: Eddie Hearn is ready to have unbeaten heavyweight contender Filip Hrgovic to step in and face unbeaten 2016 Olympic silver medalist Joe Joyce in his next fight on July 13 if he still needs a quality opponent for that date at the O2 Arena in London, England. Hearn said he would be willing to subsidize part of the 26-year-old Hrgovic’s purse in order to make the fight.

This looks like a classic move on Hearn’s part to mess with the heads of Joyce’s management without him being serious about making that fight. Hrgovic has too much to lose by being thrown in with a guy like Joyce. The timing of Hearn saying that Hrgovic will take the fight with Joyce comes after his management have already found an opponent for him to fight on July 13th.

Joe Joyce vs. Bryant Jennings in the works for July 13th

“A lot of people believe Hrgovic is the best heavyweight in the world already, which is quite surprising, because he’s only had seven fights,” Hearn said to IFL TV. “It’s too early to say. AJ [Anthony Joshua] thinks Hrgovic is a brilliant heavyweight. Rob McCraken thinks Hrgovic is a brilliant heavyweight. You’ve got Joe Joyce’s team saying nobody wants to fight Joe Joyce. Filip Hrgovic, he’ll fight you on July 13th. Yeah, no problem,” Hearn said when asked if he’d be willing to put Hrgovic on a Frank Warren fight card.

Hrgovic fought in the 2016 Olympics, but was eliminated by Tony Yoka by a 2-1 score. Joyce progressed further in the 2016 Olympics than Hrgovic, and lost a controversial decision to Yoka in the final. A lot of boxing fans felt that Joyce did more than enough to deserve the victory. The judges appeared to ignore the many body punches that Joyce landed in the fight when it came to them scoring the fight. As a pro, Hrgovic has looked good, but far from great in beating the likes of Amir Mansour, Kevin Johnson, Sean Turner and Tom Little.

“He wants to fight all these guys. I’m excited to have that monster, because it’s a lot better to have him than not have him,” Hearn said. “I may box him on the Lomachenko-Campbell card if we get that sealed for the UK for the end of August. He’s a tremendous heavyweight. He [Hrgovic] will be fighting for the heavyweight world title within 18 months, no question. Alexander Povetkin, I spoke to his team; he’s up for fighting Joe Joyce. [Carlos] Takam is up for fighting Joe Joyce. He had a fight that fell out. They could be trying to schedule Bryant Jennings [for Joyce to fight on July 13]. Jennings just got ruined by Oscar Rivas, but he’s a decent fighter. He’s well accomplished. Joyce is 8-0, so he’s a couple of fights ahead of Hrgovic. I think Joyce is moving at a great pace. I do think Joyce does want to fight those top guys. It’s not that easy, because there’s not a lot to gain in fighting Joe Joyce. This is a problem you have with Josh Kelly and Joshua Buatsi. Fighters look at them and say, ‘7-0, 8-0; if I lose to a 7-0 guy, I’m done.’ If Joyce needs an opponent, Hrgovic, I believe, will take the fight. I think Povetkin will take the fight. Takam [will take the fight], but You’ve got to pay up. We’ve [Matchroom Boxing] paid up, so everybody else has to pay up. You’ve got to pay up for those kinds of fights. I don’t know if they have the numbers to pay up. If they’re going to invest in Joe Joyce, then they’re going to have to pay up. Hrgovic wouldn’t even be expensive. We could even talk about us subsidizing the purse for them. Povetkin will be expensive, as he should be. He’s a quality fighter. Takam is quite lumpy, but you’ve got to pay up,” Hearn said.

You’ve got to give Hearn a lot of credit for him being open to letting Hrgovic fight Joyce, because that would be a very tough fight for him. Joyce hits hard, and he would likely walk through the shots from Hrgovic to punish him.

Hearn compares Hrgovic to Wladimir Klitschko, but he’s not that kind of a puncher, and he’s not as fast as the former world champion. Hrgovic has some power, but he’s not a Klitschko type of talent. Joyce would be a really hard fight for the likes of Hrgovic. He could very well lose that fight if it were to get made. It would be interesting to see if Joyce’s manager Sam Jones will call Hearn’s bluff by agreeing to make the fight with Hrgovic. Does Hearn make the fight or turn it down, and say that he already had plans on putting him on the undercard of the Vasiliy Lomachenko vs. Luke Campbell card in late August. Joyce has already beaten Hrgovic in the past. He might have his number. It could be a mistake if Hearn has Hrgovic walk the plank by fighting the older more experienced Joyce on July 13.