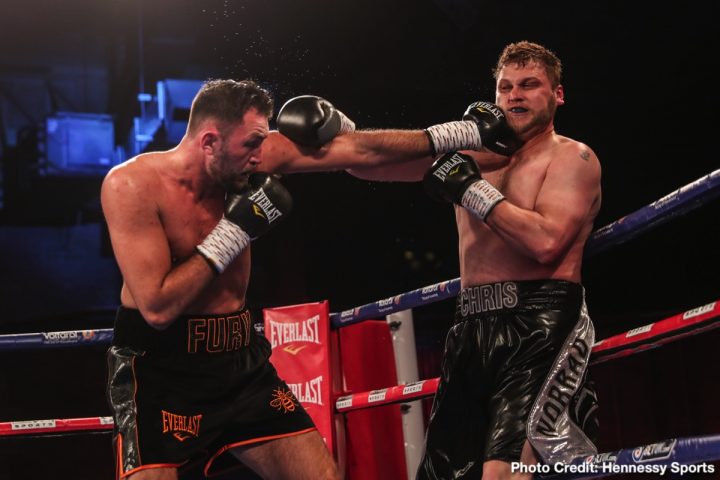 By Scott Gilfoid: Heavyweight Hughie Fury (22-2, 12 KOs) put on a rabbit punching clinic in stopping the hapless Chris Norrad (17-1, 8 KOs) with a textbook right-hand rabbit shot to the back of his his head in the second round on Saturday night at the Victoria Warehouse in Manchester, England.

The referee Mark Lyson let the rabbit punch knockdown stand, and he waived it off once the 35-year-old Norrad got to his feet, even though it appeared that he had made it up in time to beat the count. The official time of the stoppage was at 1:51 of round 2.

Hughie had been warned for a low blow and a rabbit in the first round. Unfortunately, he continued to throw the looping rabbit shots, and that caused the ending of the contest. If this is how Hughie is going to be winning his fights in the future by braining his opponents with shots behind the head, it’s going to be hard to go far in the sport. Sooner or later, the referees will stop letting Hughie get away with this move.

Hughie bounces back from loss to Pulev

In Hughie’s previous fight, he was beaten by Kubrat Pulev by a 12 round decision last October in an International Boxing Federation heavyweight title eliminator in Bulgaria. Pulev totally schooled Hughie in making it look in easy in beating him. Had Hughie won that fight, he would have been the IBF mandatory for IBF champion Anthony Joshua. It’ll be interesting to see how long it’ll take for one of the sanctioning bodies to put Hughie in a world title eliminator. As bad as Hughie looked tonight, it’s hard to imagine him being able to earn his way into a mandatory spot to fight Joshua or WBC champion Deontay Wilder.

“It was pretty much easy,” Hughie gloated afterwards in bragging about his win over Norrad to IFL TV. “He was just there to be hit. It [the rabbit punch] was on the side. A clean shot. Obviously, he didn’t last long, did he? I feel more fit now. I enjoyed it. I feel stronger in my body. I got a little of experience, and it’s going to play a part in the future. If I get the right people, I’m not afraid to fight anyone. Hopefully three time,” Hughie said in saying he wants to fight three times in 2019. “I’m hitting a lot harder as well. Whoever comes, I’ll be ready. Whenever there’s an opportunity, I’m willing to fight again,” Hughie said about wanting to fight for another world title.

Hughie, 24, says he’s not afraid to fight anybody, which is all well and good, but tonight’s performance doesn’t suggest that he’s ready to fight the elite in the heavyweight division. In the few times that the soft-looking 229 pound Norrad threw punches in the fight, he was landing with ease. Hughie moved his head and upper body a lot, but he was telegraphing his right hand each time he would go to throw it. Even a mediocre fighter like Norrad picked up on Hughie’s fight pattern, and he was able to catch the 6’6″ fighter with shots periodically.