Deontay Wilder: “I can say whatever I please” 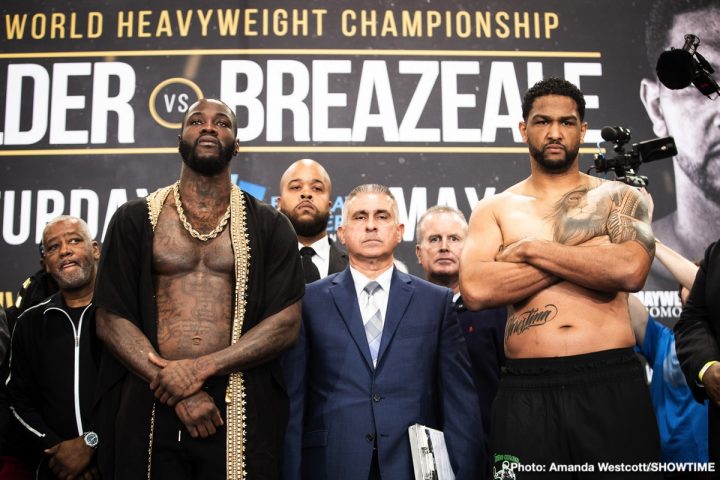 By Mark Eisner: In the face of mounting criticism from boxing fans and rebuke from the WBC, Deontay Wilder isn’t backing off his comments about him wanting to potentially end the life of challenger Dominic Breazeale on Saturday night.

Wilder, who holds the WBC heavyweight title, says he has the right to speak his mind. WBC president Mauricio Sulaiman say Wilder’s comments are against the WBC’s code of ethics, and that they will have a hearing to address them.

Wilder is speaking his mind in saying what he feels. It’s going to be difficult for the WBC to do anything about it. If this were a football player that said that he hopes a player when he tackles them, it’s unclear what the league could do about it.

Wilder said this on the Stephen A. Smith radio program with ESPN:

“I speak my piece. This is a sport where we sign up with. This is the sport that I signed up to do. I risk my life in that ring. So as me, as an individual, to risk my life for other’s entertainment, I can say whatever I please. I’m doing this for other’s entertainment. People can take my words as what they want. If they don’t like it, don’t watch it. But nothing I said that ain’t true, nothing I said that hasn’t been said before. So why people wanna take it into consideration now?”

It doesn’t sound like Wilder, 33, is in the mood to apologize for his comment about wanting to add a body to his resume on Saturday, does it? The WBC can try and persuade Wilder to issue an apology, but they won’t be able to force him. He’s speaking his two cents. The closet Wilder has is showing sympathy for Breazeale is talking about paying for his funeral if he dies on Saturday night. Wilder is using an odd way to try and hype his fight with Breazeale. You can say it’s worked for Wilder to talk about death, because there’s now more boxing fans talking about this fight than they probably otherwise would have.

“I have seen Deontay Wilder comments which are regrettable and completely against the spirit of our sport. I have known Wilder for a long time and he is not the person he portrays in such comments. His metaphors are against the WBC code of ethics and will be addressed in a hearing.”

Wilder might not realize is he’s a role model for some kids. With him sounding so blaze about wanting to add a body to his record, some kinds of are going to listen to him and they might take the same approach that he does about fighting. Wilder might not be serious about what he says, but if someone young takes him seriously, they could go down the wrong path.

“What have I said that any fighter that has came before me hasn’t said?” Wilder said. “There’s one particular individual who said way more worse things than I could ever say in one sentence!”

In the old days, a fighter might say, ‘I’ll murder the bum,’ in talking about his opponent. You can argue that Wilder is taking an old school approach to his fight with Breazeale by talking about wanting to destroy him the way fighters used to do.

If Wilder loses to Breazeale by knockout on Saturday, he’s going to look pretty silly for all the comments he made going into the contest. It’s too bad Wilder feels it’s necessary for him to hype the fight the way he’s done.


« Taylor vs. Baranchyk and Inoue vs. Rodriguez analysis & predictions

Carlos Cuadras added to Ito vs. Herring card on May 25 »