Taylor vs. Baranchyk and Inoue vs. Rodriguez analysis & predictions 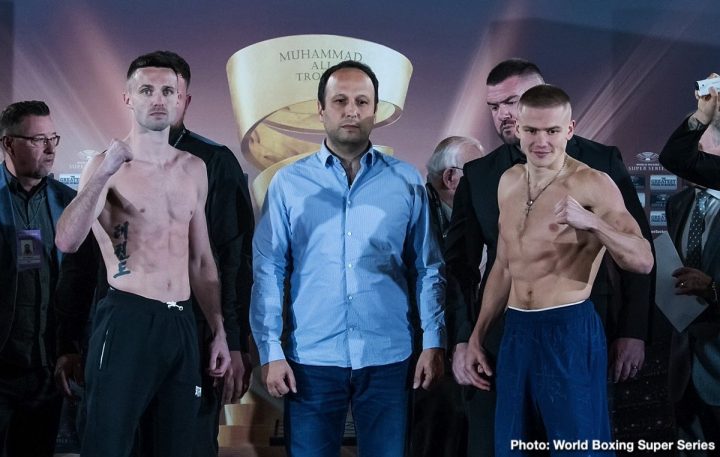 By Tim Royner: Tonight, the World Boxing Super Series tournament will have two superb semifinal matches between WBA ‘regular’ bantamweight champion Naoya Inoue (17-0, 15 KOs) and IBF champ Emmanuel Rodriguez (19-0, 12 KOs) in a unification match in the 118-pound division, and a contest between IBF light welterweight champion Ivan Baranchyk (19-0, 12 KOs) and WBC Silver champ Josh Taylor (14-0, 10 KOs) on DAZN in the United States and Sky Sports in the UK from The SSE Hydro in Glasgow, Scotland.

Inoue, 26, is easily the most talented of the four semifinalists in the WBSS 118 and 140-pound tournament competition tonight. With razor sharp accuracy and one-punch power, he’s very likely going to score an early high-light reel knockout of his opponent Rodriguez. You never know though, David Carmona gave Inoue fits in taking him the full 12 round distance, and inning rounds against him in their fight in May 2016.

The fighter with the advantage in this venue is the 28-year-old Josh Taylor, who comes from Glasgow, Scotland. Most of the boxing fans that will be filling The SSE Hydro tonight will be Taylor fans. That put a lot a lot of pressure on Baranchyk and his trainer Freddie Roach to make sure they can take the fans and the judges out of it.

The 5’10” southpaw Josh Taylor (14-0, 11 KOs) is the favorite in this fight, and for good reason. He’s fighting at home in Glasgow, and recently was given a wide 12 round unanimous decision victory in a fight that appeared to be incredibly close against Viktor Postol last June. Taylor is clearly as talented as some boxing fans originally thought he was when he first turned pro. There was a window there for Taylor to move in and challenge then IBF/WBA/WBC/WBO light welterweight champion Terence Crawford as the best fighter in the 140-pound weight class, but that has closed now that Regis Prograis has emerged as the new supreme talent in the light welterweight division. Nevertheless, Taylor could get home advantage against Prograis for the WBSS final if he defeats Baranchyk tonight, and that’s a big if, because the talented Russian fighter has the punching power and the fast pace style of fighting to give Taylor fits.

“I think my guy will knock him out. I don’t think he (Taylor) has ever been in a real hard, hard fight, and this might be his first one,” Baranchyk’s trainer Freddie Roach said. He better be ready.”

The major flaw in Taylor’s game besides his defensive lapses is his poor stamina. Taylor gasses after six rounds, and that’s going to be a potential problem for him tonight when he gets inside the ring with Baranchyk. The Russian fighter has one gear, and that’s high. He’s going to be putting nonstop pressure on Taylor the entire time, taking the fight to him on the inside and making him fight hard. Taylor likes to throw uppercuts. That’s his main weapon, but he does poorly when he’s pressured. We saw that early on Taylor’s career when he fought Alfonso Olvera and Miguel Vasquez. When those fighters took the fight to Taylor, he looked beatable and nowhere near the fighter that some boxing fans had thought of him when he first turned pro in 2015.

“I believe the winner of this fight will win the Ali Trophy,” Roach said about the Taylor vs. Baranchyk fight.

Unfortunately, Roach’s opinion of the Taylor-Baranchyk deciding the eventual winner of the World Boxing Super Series tournament isn’t what many experts in the sport believes. They see Prograis (24-0, 20 KOs) as the eventual winner of the WBSS 140-pound tournament based on how good he looked in his recent sixth round stoppage win over WBA light welterweight champion Kiryl Relikh in the quarterfinal of the WBSS tournament on April 27. Prograis showed a lot of talent, as well as punching power in that fight. Based on how good Prograis looked, the winner of the Taylor vs. Baranchyk match tonight will need to raise their game considerably to to beat him. Prograis is looking unbeatable right now.

“We have a good game plan, and Ivan has been working really well with it,” Roach said. “Ivan is the underdog, and I love being the underdog. We got something to prove.”

Roach isn’t giving away what the game plan is for the 26-year-old Baranchyk to use to beat Taylor, but it’s likely to be a similar plan as the one that Ivan used to defeat the previously unbeaten Anthony Yigit (23-1-1, 8 KO) in their quarterfinal fight in the WBSS tournament on October 27 in New Orleans. Baranchyk took the fight to Yigit, forcing him to exchange with him for the entire match. Yigit, who isn’t much of a puncher, fought valiantly, landing a lot of shots, and winning over the crowd with the heart that he displayed. It was no use. Baranchyk was too relentless with his attacking style of fighting, and there was no way that he was going to be able to hold up under that kind of steady punishment. Yigit’s left eye ended up closing completely, forcing the fight to be halted in the seventh round.

“We are in with a strong opponent of course. This fellow is tall, he is lanky, shabby, he has got this nice jab and this counter hook over the jab with his southpaw stance,“ said Roach about Taylor.

Taylor, 5’10”, will have a two inch height and reach advantage over the 5’8″ Baranchyk. That would mean something if Baranchyk were the type of fighter that fought only on the outside, but that’s not how he fights. Baranchyk like to crowd his opponents, fight them on the inside and give them major grief with his nonstop pressure. In a word, Baranchyk is a nightmare for anyone to fight, especially a guy with well known conditioning issues like Taylor.

Like Taylor, Baranchyk has fought a lot of quality opposition since he turned pro in 2014. Baranchyk’s best wins have come against these fighters:

None of those fighters are a threat to any of the world champions at 140. Those are mostly fringe level/second tier guys in the weight class.

Baranchyk tends to leave himself open when he’s on the attack. Taylor will likely be able to catch him with something big as he’s coming in at some point in the fight tonight. This writer sees Taylor knocking out Baranchyk by the eighth round. There’s also a possibility of Taylor winning a decision. It’s very unlikely that Baranchyk will win a decision. If he’s going to win, it’ll be by a knockout. Taylor is fighting at home, and the crazy scorecards that fans saw from his recent fight against Postol in Glasgow suggests that beating him by a decision that town might prove to be difficult. Former three division world champion Ricky Burns was involved in his controversial decisions in fighting at home in Glasgow. Who can forget Burns’ 12 round draw against Raymundo Beltran in September 2013. Beltran fought well enough to deserve a lopsided 12 round decision. Hopefully, tonight’s Taylor vs. Baranchyk has a conclusive winner either way. What the boxing world doesn’t need is the winner of tonight’s fight to march into the WBSS final off the back of a tainted win. A draw would be worse. What does the WBSS tournament do at that point? Wait for Taylor and Baranchyk to fight again or do they select one of the two to face Prograis in the final?

WBA ‘regular’ bantamweight champion Naoya “Monster” Inoue (17-0, 15 KOs) is looking very hard to beat right now, and he’s facing a guy that is coming off an unimpressive performance in IBF champion Emmanuel Rodriguez (19-0, 12 KOs). Inoue, 26, has knocked out his last two opponents since moving up to the 118-pound weight class in 2018. Inoue won’t be able to keep knocking guys out forever though. Inoue looks beatable when his opponents are able to take his power and hit him back. Inoue is like anyone else when he’s getting hit. The question is though, can Rodriguez handle Inoue’s power long enough to land his own big shots? If so, then we’re going to have a great fight tonight. This writer has doubts about whether Rodriguez will be able to handle the speed, power, accuracy and the overall talent of Inoue tonight. Rodriguez’s resume as a pro is littered with no name opposition of meager talent. When he recently had to step up for the first time in his short seven-year pro career against Jason Moloney (18-1, 15 KOs) on October 20 in their quarterfinal fight, he struggled to win that fight by a 12 round split decision. The judges scored it 115-113, 115-113 for Rodriguez and 115-113 for Moloney. It was close. Inoue would likely have torn Moloney apart if he had fought him. Just looking at how Rodriguez had problems against Moloney, it’s difficult to see him doing well against Inoue tonight. You never know though. Styles make fights, and there’s a chance that Rodriguez can take Inoue’s big power shots long enough to put hands on him the way that David Carmona did in 2016.

Inoue will land enough of his big shots on the chin of Rodriguez to knock him out early tonight. I see this fight ending by the fourth round. However, if Rodriguez is able to get motivated by the Glasgow crowd, he’ll make it tough for Inoue, who has only fought once outside of his home country of Japan during his seven-year pro career against Antonio Nieves in 2017 in Carson, California. Nieves isn’t in the same talent class as Rodriguez, and he’s not as big as him. If Inoue suddenly isn’t being cheered as much by the crowd, can he win this fight?

Deontay Wilder: “I can say whatever I please” »