Canelo vs. Jacobs: Daniel ANGRY at Golden Boy trying to weaken him with rehydration limit 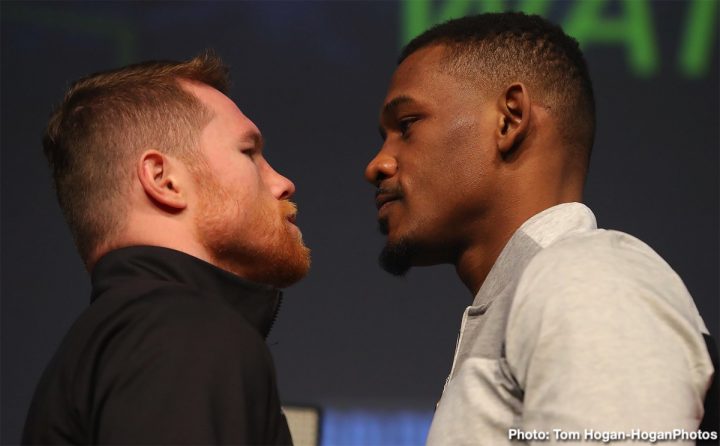 By Sean Jones: Daniel Jacobs is furious at what he believes is Golden Boy Promotions attempting to stack the deck in their fighter Saul Canelo Alvarez’s favor with a weight clause this Saturday night on DAZN at the T-Mobile Arena in Las Vegas, Nevada. Jacobs (35-2, 29 KOs) is taking issue with the 10 pound rehydration clause that Golden Boy put into the contract that limits the amount of weight that he and Canelo can rehydrate to.

The fighters can’t weigh higher than 170 pounds on the morning of the fight on Saturday otherwise they have to pay a weight penalty of $100,000 per pound, says Jacobs. There’s a secondary weigh-in at 8 am. on Saturday. Jacobs’ promoter Eddie Hearn said he might take care of the weight penalty for him if he comes in over the 170 lb limit.

Although the reydration effects both fighters equally, Jacobs believes Golden Boy put it in the contract to try and weaken him by keeping him small, and he doesn’t like it.

“You don’t control boxing because you are the biggest man in the sport. You don’t start dictating what happens in weigh stipulations,” Jacobs said to Fighthub in taking a BIG shot at the popular Canelo. “Never in my life; this is like new to me, this whole weight stipulation thing and contracts on everything else other than. And for me, I’m a true fighter, so I’m going do the things that I need to do and I understand that this is the biggest fight that can be made so I had to take that chance.”

In Jacobs’ previously biggest fights of his career against Gennady Golovkin and Peter Quillin, he didn’t have to deal with rehydration clauses. The promoters for those fighters didn’t ask Jacobs to agree to a rehydration clause in order for him to get a fight against them.

Canelo doesn’t rehydration clauses to win fights or at least he shouldn’t need them. Golden Boy Promotions CEO Oscar De La Hoya spoke this week to the media, saying that Canelo is the Face of Boxing, and how he’s just starting his career out at 28. If Canelo is all those things, then why does he need a rehydration clause to help him win, especially given the fact that he recently moved up to super middleweight in his last fight and defeated WBA ‘regular’ belt holder Rocky Fielding by a third round knockout on December 15th last year at Madison Square Garden in New York. Further, Canelo has been talking about wanting to move up to 175 to take on WBO light heavyweight champion Sergey Kovalev. If Canelo is dead serious about wanting to do that, then he shouldn’t need the rehydration clause for a fight against Jacobs, should he? It doesn’t make sense. Is Canelo keeping track of the things that his promoters at Golden Boy Promotions are doing when it comes to negotiating fights? Stuff like rehyration clauses work against Canelo becoming the star that he wants to, because it creates bad press and puts him in a bad light. It’s hard to imagine a fighter like Golovkin agreeing to a rehydration cause for a fight against Jacobs. GGG obviously didn’t require that Jacobs agree to a rehydration clause when he beat him in March 2017.

Explaining what the rules are for the rehydration clause for the Canelo fight, Jacobs said, “That if I weigh over 170 lbs come the morning of [Canelo match on Saturday] that I had to pay; first it was $250,000 a pound, [but] we got it down to $100,000. So this is, really; you guys are seeing the concerns that they have. They’re thinking because I’m a big middleweight that I need an advantage and they want to keep me as small and dehydrated as possible. But it won’t work,” Jacobs said about Golden Boy.

Canelo shouldn’t be so passive when it comes to the fight contracts that are being negotiated by his promoters. If Golden Boy are floating these things by Canelo first and making sure he gives them the green light before they put them into the contract, then he’s giving them the green light to do use these moves. But if Canelo is finding out after the fact that there’s a rehydration clause in the contract, then that would be disturbing. Canelo has to know given that he’s got to participate in the secondary weigh-in on the morning of the fight. The question is why Canelo want a rehydration clause for the Jacobs fight? Is it a confidence thing? Is he worried about losing to Jacobs? If that’s the case, then Canelo needs to stay away from super middleweight Callum Smith and light heavyweight Sergey Kovalev. If Canelo fights Smith and Kovalev, will there be a rehyration clause for those fighters as well to limit how much weight they can gain back after they weigh in?

Canelo has been a pro for a long since. He shouldn’t need rehydration clauses and catch-weights for him to win his fights, and he should be able to fight outside of Las Vegas for his important fights

Even though Jacobs skipped the IBF mandated secondary weigh-in for his fight against Golovkin in 2017, there’s no reason to have a rehydration limit that’s not required by the International Boxing Federation for the Canelo-Jacobs fight on Saturday. Jacobs chose not to take part in the secondary weigh-in for the GGG fight. That was his option. He sacrificed not being able to fight for the IBF title in order to try and just beat GGG to capture his WBA and WBC titles that would still be up for grabs. It was a smart move by Jacobs. It didn’t work, but it was still a wise move for him.

Canelo’s boxing fans point out quite correctly that he’s dealing with the same rehydration clause this Saturday that Jacobs is. All the same, it still looks bad on Canelo’s part that he agreed to the rehydration clause, because he could have told Golden Boy NOT to have this for the fight. Canelo has the final say so. He’s the A-side superstar, and whatever he says to his promoters, they’re obviously going to do agree with.