One Name, One Face, One Champ 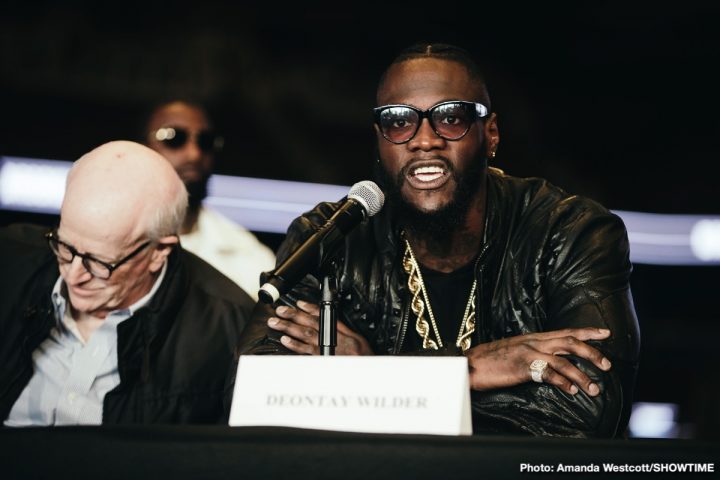 By The Commissioner: A certain Mr. Deontay Wilder says it, ‘One face, one name, one champ’. He says this because that’s what he wants to become; his dream is to unify a division by claiming all of the belts, inevitably become a superstar and retire going down in history as one of the best Heavyweight Champions to ever lace up the gloves.

Is that what the fans want though?

We get excited about unification fights; the prospect of seeing two belt holders slug it out to see who is the ultimate champion in their division is something we crave as boxing lovers. They don’t come along too often because in recent times, boxing politics acts like a speed limiter in dragging out the invariable collision of each divisions elite champs. Hall of Fame promoter Bob Arum calls it ‘marinating’. While there is an undeniable argument for building a fight to ensure it is more of a spectacle, essentially heightening the levels of entertainment and engagement of those who wish to see it, there is also a need for these bouts to take place to ensure boxing does not edge into the realms of pantomime and script.

If we take a look at the current situation within the boxing ranks, we have 17 divisions, each with 4 recognized champions. That’s 68 world champions; 68 people who call themselves the champion of the world. A minimum of 68 world title fights in 1 year. 68 belts wrapped around the waists of 68 boxers. This is without the regular champions, international champions, interim champions and emeritus champions. The WBA have 3 champions in a weight class; a super champion, a regular champion and an interim champion. How can someone be an interim champion when the super and regular champions are still in situ? Have you ever heard of Arsen Goulamirian? Well he’s actually in possession of the WBA Cruiserweight interim belt. Some would say that boxing has already smashed its way through the doors of pantomime and script and has made itself at home.

Why do we accept this?

I have been thinking recently about what would need to happen for things to change, for boxing to continually give us the best versus the best and finally give fans the fights that they want to see. To find a solution, first we need to analyse the problem.

It’s important to understand why the situation never changes; money. A fighter does not need to fight the best to get rich. In boxing’s golden years, say 1960-1990, to get rich you had to be the best or at least fight top level opposition consistently to gain the popularity that was required for the boxing public to want to see you fight. With the development of cable TV, promoters are able to sign deals with broadcasters to show their cards and with that, there is an incentive to dilute the quality. Now promoters only have to fulfill a certain number of cards and market those cards correctly to sell them to fans as elite match ups – this is a lot easier to do when your fighter has a ‘world title’ on the line.

What this does is removes the desire and necessity for a boxer to fight the best. It’s now seen as acceptable for a prizefighter to retire having only one or two genuine 50/50 fights on their resume but in a monetary sense, the mismatches are what makes them rich. Governing bodies get their sanction fees, so if they get a popular fighter as their champ it’s in their best interest to help them monopolize the title for as long as possible; inflate a fighters ranking? Sure. Allow you another voluntary defence? Of course. Doping violation? Take 6 months out.

Promoters don’t want to push for change, why should they? They are in it for the profits. They don’t care that you stayed up until 3 a.m to watch a world champion annihilate a tomato can in a bout billed as ‘Thunder Down Under’ or ‘Day of Reckoning’. It doesn’t break their heart that a unified Heavyweight Champion they promoted just retired having fought no one of note and in 5 years they’ll be sauntering into the Boxing Hall of Fame and finding themselves on a list next to luminaries such as Jack Dempsey, Joe Louis, Muhammad Ali or Lennox Lewis.

It saddens me that the desire to be the best just because you want to prove you are has been eroded. A boxers longevity is no longer decided by how sharp his skills remain as Father Time weathers his tools; it’s decided by how long promoters can convince the public that they are still a genuine threat.

Boxers convince themselves that they are doing what’s the best for their careers, how many times have you heard ‘I just fight whoever the promoters put in front of me’? The world has changed, in all aspects of life we see currency lauding over honor, perception overtaking reality, security becoming more important than desire. These fighters have very short careers and understandably, their main priority is securing their families future. When we see cases such as Gerald McClellan’s, who was permanently incapacitated before he was able to do so, we stop for a second and comprehend the tragedy this sport can unexpectedly cause and then we don’t feel so critical of the athletes who treat it as a business. But there has to be some element of competition right? There has to be some niggling need to test oneself against equally talented adversaries.

There is a way.

In this new structure, the fans vote for the champion; to start with. The champion always gets a 70/30 split and decides where the fight is staged. This offers three things; firstly, 70% of the purse of a huge fight is bigger than 80% of a smaller one. The total purses should be bigger because the champion will be consistently fighting high level opposition, thus, fans will tune in to watch achieving higher viewing numbers and in turn, more money. Secondly, the incentive to the challenger is a guaranteed 30% of the purse and the chance to become the guy that subsequently receives a consistent 70% if they win. Thirdly, this gives the fans a chance to see who is looking for the easy fights and who actually wants to challenge themselves and leaves a legacy that means something. The fans choose the champion to start with right? So how would that look if they turned down the chance to fight for their own fans?

Below the champion and number one contender positions a 5% increment is added to the fighters purses for every place they are above the other in the rankings. These fights could be ordered either by the fans themselves in some form of poll or simply by making no. 2 and no. 3 fight at the same time the order is given for the title holder to defend. So, I’m the instance of 2 and 3 duking it out, rank 2 would receive 55% of the purse to rank 3’s 45%. If a boxer couldn’t fulfill a fight due to injury or some other reason, it would go to the next ranked fighter below and in the case of rank 2 fighting rank 4, the split would then become 60/40.

No more catchweights. The champion gets one opportunity per year to go up/down weight divisions to challenge their belt holder. If they capture a strap in a different weight class they must decide then and there what division they want to continue competing in and they release the belt for the number one and two contender to contest. The loser of the battle between the two different weight class champs drops down to position 5 in the rankings with all above them moving up a place. This changes how fighters create legacies while demanding respect for weight classes but it still allows for those who want to move up or down to prove their skills against the best pugilists.

If a ranked fighter wants to fight outside of the structure i.e. for a alphabet governing body they automatically forfeit their place within the system and would have to start again from the bottom.

The overall idea is to give credence back to titles and allow the fighters who wait years for the opportunity to challenge the champion a clear pathway to their shot. It’s to shame the boxers into not taking part in a system that promotes competition, after all why compete if you’re not really challenging yourself? It’s to eradicate the ABC bodies from the sport and clamp down on the corruption that is prevailing within them.

Ultimately, it allows fans to decide who is the best and let’s those boxers who genuinely want to prove themselves, retire with a legacy that is flesh and bone rather than smoke and mirror.

I asked earlier when talking about a unified champion of the 4 main belts ‘is that what the fans want though?’ Do we really want a champion that can cherry pick their way to becoming a legend or can we make them prove that they are one?

I’d love to hear your thoughts and suggestions, perhaps you’ve thought of your own system that could work and help boxing edge away from the pantomime and script it has become. Let me know in the comments!


« Canelo vs. Jacobs: Daniel ANGRY at Golden Boy trying to weaken him with rehydration limit