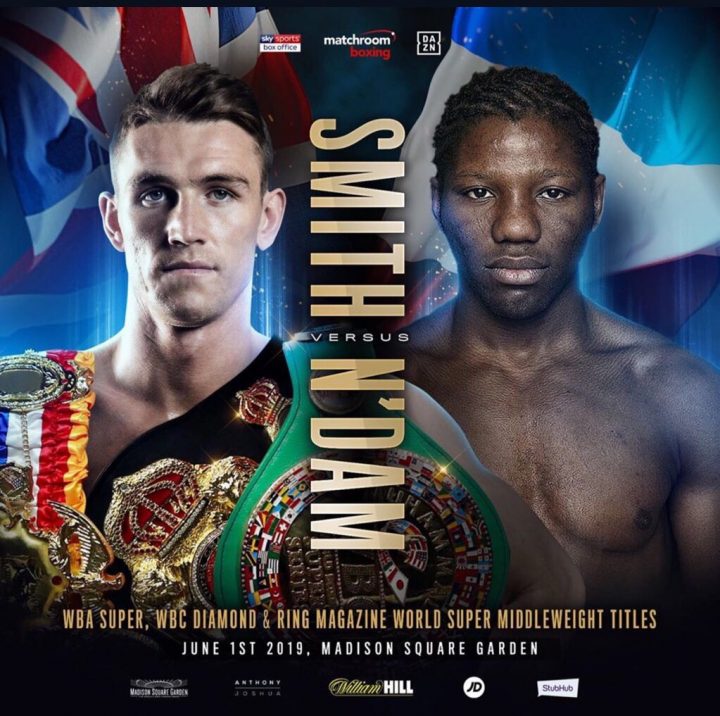 It’s unclear why Johnson’s promoter Eddie Hearn of Matchroom Boxing selected N’Dam, as he’s NOT a super middleweight. He fights at middleweight, and he recently looked like an over-the-hill fighter in his loss to Ryota Murata in their rematch on October 22, 2017. Murata, who was recently beaten by Rob Brant, totally dominated N’Dam in battering him for seven rounds until the fight had to be stopped. That was almost two years ago. Since then, N’Dam has fought just once in beating 37-year-old Martin Murray last December by a 12 round majority decision. You don’t want to take away the shine from N’Dam’s win over Murray, but we’re talking about a fighter that’s 37-year-old, and who was beaten each time he stepped up against better opposition during his career. Murray is best his best.

Callum received a lot of attention recently in winning the World Boxing Super Series super middleweight tournament last September in Jeddah, Saudi Arabia. However, Smith’s opposition was less than stellar. The tournament was littered with weak opposition, so it took away any real accomplishment one could give Callum for winning it. Callum’s best opponent in the tournament was George Groves, who looked like he was only 50% of what he once was due to a left shoulder injury that he suffered in his semifinal match against Chris Eubank Jr. Groves had surgery before he fought Callum, but his left shoulder didn’t look strong at all in the final against him. Groves was pretty much fighting one-handed with just his right hand. This wasn’t the same Groves that beat Eubank Jr. Groves fought like his left shoulder wasn’t there. It’s not surprising that Groves retired after his loss to Callum. These are the guys that Callum beat in the WBSS tournament: Erik Skoglund, Nieky Holzken and Groves. Those are not the best fighters.

Why was N’Dam selected for Callum Smith?

Hearn is pretty excited at Callum fighting N’Dam for some reason. It’s unclear why Hearn sees this fight as such a great one. Perhaps he believes that the average U.S boxing fan are familiar with N’Dam. They’re not. The casual fans in the U.S have no idea who N’Dam is, but perhaps that’s a good thing. They won’t know that he’s seen better days, and that he’s NOT a super middleweight. The hardcore fans in the U.S know who N’Dam is, of course, and they remember how Peter Quillin, a flawed former WBO middleweight, floored N’Dam six times in beating him by a 12 round unanimous decision in December 2012. Further, the hardcore fans remember N’Dam for getting knocked down four times by David Lemieux in losing to him by a 12 round unanimous decision in June 2015 in a failed bid to win the vacant International Boxing Federation middleweight title. N’Dam was able to come back from the loss to Lemieux to win his next five matches. Among those victories was a highly controversial 12 round split decision victory over Murata in their first fight in May 2017 in Japan. Many boxing fans felt that Murata had done more than enough to deserve the victory. This writer had Murata winning the fight by four rounds. Never the less, Murata came back to stop N’Dam in their rematch later in the year to briefly win back his WBO 160-pound title before losing the strap to American Rob Brant last October in losing a one-sided 12 round unanimous decision. In what many fans believe is a waste of time, Murata will be fighting Brant in a rematch this summer on July 12 in Osaka, Japan. Brant is a a punching machine, and he clearly has Murata’s number.

“I am confident I will create a big surprise in New York,” said N’Dam. “At this stage of my career this is a beautiful opportunity for me to be able to change division and fight for both the WBA World and WBC Diamond titles. I believe it will be a very tactical fight. I have the experience of boxing on big shows as I have participated in many and in front of thousands of people. I have always defended my titles abroad and I am used to pressure and know how to handle it,” N’Dam said.

N’Dam hasn’t seen Callum fight if he truly believes it’ll be a tactical fight. Callum is going to attack N’Dam the way that Lemieux and Quillin did in dropping him repeatedly. This is just a showcase fight for Callum, which is sad because he’s being put on the Joshua vs. Ruiz Jr. card. That’s a high visibility card. A lot of hardcore and casual boxing fans will be watching the fight in the U.S. You’d like to think that Hearn could have picked someone better than 35-year-old N’Dam for Callum to fight. Preferably, someone from the super middleweight division would have been nice. This writer would like to have seen Callum defend against John Ryder, Chris Eubank Jr., Fedor Chudinov, David Lemieux, Vladimir Shishkin, Juergen Braehmer, Jose Uzcategui, Caleb Truax, Jesse Hart or Aidos Yerbossynuly. At least those guys are true super middleweights.

“This is a huge platform and one that Callum fully deserves,” said Hearn. “He has established himself as the number one 168 pounder in the World and will prove it at the Mecca of boxing on June 1.

Is Callum Smith the number one super middleweight?

Callum hasn’t established himself as the #1 super middleweight in the world. Hearn is wrong. The only thing Callum proved in winning the WBSS tournament is he could beat some flawed fighters in Holzken, a former kick boxer, an injured over the hill Groves, and Skoglund. Callum didn’t fight the best. For Callum to have proven that he was the best fighter in the 168-pound division, he would have had to beat these guys:

While I do believe that Smith beats most of those guys, but I don’t think he would beat all of them. Benavidez, Plant and Saunders would all likely beat him. Even Braehmer would be a nightmare for him. Benavidez would likely knock Callum out. There’s too much power on Benavidez’s side, and Callum looked lost even against Holzken, a fighter that doesn’t come from a boxing background.

What’s interesting about the Smith vs. N’Dam fight is how N’Dam’s name suddenly was inserted into the top 15 rankings at #13 with the World Boxing Association at 168 after he started being mentioned as a potential opponent for Smith to fight on June 1. Before that, N’Dam wasn’t ranked at at all super middleweight, which would make sense, because he only competes at 160. Why would N’Dam be ranked in a division he doesn’t fight in?

Callum’s best career wins have come against these fighters: Rocky Fielding, Nieky Holzken, George Groves, Erik Skoglund, and Hadillah Mohoumadi. The only talented fighter among that group is Groves, and he wasn’t 100% due to his shoulder problem. The way that Groves looked at times in that fight, you can argue that he would have demolished Smith if he’d fought him earlier in the WBSS tournament before his left shoulder was injured against Eubank Jr.