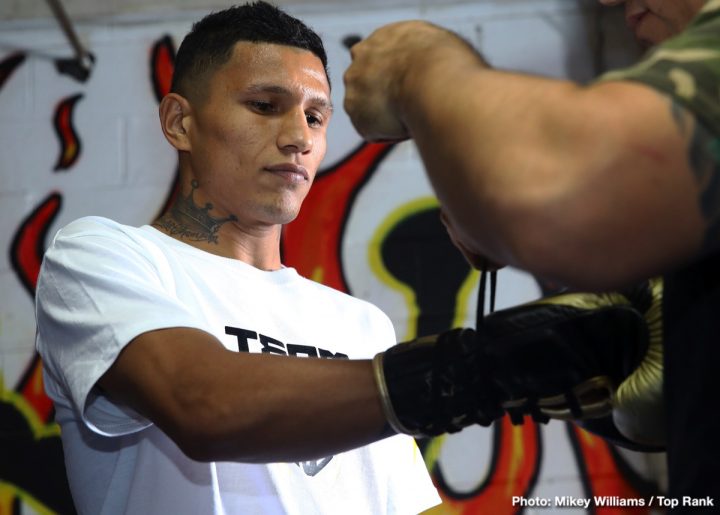 By Chris Williams: WBC super featherweight champion Miguel Berchelt will be making his fifth defense of his WBC 130-pound title this Saturday night on May 12 against 34-year-old former WBC belt holder Francisco ‘El Bandito’ Vargas in a rematch on ESPN at the Convention Center in Tucson, Arizona.

Berchelt (35-1, 31 KOs) would like a fight against former WBO super featherweight champion Vasiliy Lomachenko, but that’s entirely up to their mutual promoters at Top Rank. Lomachenko didn’t fight Berchelt when the two of them were both world champions at 130, so it’s unclear whether he’ll take that fight when he eventually moves back down in weight in a year or two.

The fight was halted with Vargas (25-1-2, 18 KOs) still on his feet, but looking beaten up and helpless. At the time of the stoppage, Vargas was cut on the bridge of his nose, and under both eyes. The cut on Vargas’ nose was opened in round three, and his cut under his right eye in round from round four from a punch. To make matters worse, Vargas was also cut under his left eye from a clash of heads in round four. To sum up the fight, it was a pure BLOODBATH, and at not point was a competitive match. For that reason it’s hard to understand what purpose there is in Berchelt, 27, defending against Vargas in a second fight aside from the money that it’ll generate.

“That is the fight we want. We want big challenges, without a doubt. I’d love to fight Lomachenko,” Berchelt said.

It would be an excellent idea for Top Rank to allow Lomachenko and Berchelt to fight each other while the two of them are still in their primes rather than waiting until one or both of them get old, and over-the-hill like we saw with the Floyd Mayweather Jr. vs. Manny Pacquiao fight. Lomachenko, 31, is the older fighter than the 27-year-old Berchelt by four years, and the most likely one of the two to start losing his skills in the future due to injury problems. For that reason, it would be good for Top Rank to not over-marinate the Lomachenko vs. Berchelt fight.

On paper, Berchelt vs. Vargas 2 looks like a business fight rather than a sporting contest. Vargas hasn’t looked the same since he was given a controversial 12 round draw in his rematch with Orlando Salido in June 2016. Vargas took terrible punishment at the hands of Salido in that fight, and he appeared to lose the fight by a 117-111 score. The judges scored it a controversial draw, but looked very much like Vargas, the A-side fighter going into the contest, had lost to Salido. Since the Salido fight, Vargas has fought just twice in beating low level opposition in Stephen Smith and Rod Salka in 2017 and 2018.

Vargas fought only once in 2018 with his victory over second tier fighter Salka. Nevertheless, the World Boxing Council has Vargas ranked #1 with their organization. Vargas’ lack of fights against quality opposition, and his inactivity hasn’t dissuaded the WBC in giving him a #1 ranking. It’s unclear if the ranking was given to Vargas by the WBC for his past accomplishments or if they feel that wins over Salka and Smith are good enough victories for him to deserve a #1 ranking. It looks strange to a lot of fans that Vargas is ranked above busier fighters that have been looking better like Eduardo Hernandez (28-0, 25 KOs), Miguel ‘Mickey’ Roman (61-13, 47 KOs) and Shavkatdzhon Rakhimov (14-0, 11 KOs). You can make a strong argument that Vargas would lose to all three of those fighters, including a half dozen other contenders in the WBC’s current top 15. As such, the WBC’s ranking #1 ranking that they’ve given to Vargas seems like it was given to hm for his past accomplishments rather than what he’s since since 2016. Right now, Vargas looks like a shot fighter, who is about to get beaten up and stopped in another one-sided mismatch against the younger, more talented Berchelt.

“I just remember all the blood that kept coming from his face, his eyes, his nose,” Berchelt said to ESPN.com, in remembering how bloody and battered Francisco Vargas looked in their first encounter in 2017. “I just remember a lot of blood.”

Vargas has taken a lot of punishment in the last four years in his fights against Salido, Takeshi Miura and Berchelt. Although Vargas came back to stop the hard hitting Miura in the ninth round in their fight in November 2015, it was a fight that saw him get hit a lot with some devastating shots from the Japanese knockout artist. Vargas didn’t look like the same fighter in his next match against Salido seven months later in June 2016. The scoring for that fight looked completely out of sorts with the action that took place. Salido breezed through the first rounds, beating Vargas like a drum. It was so one-sided that one could argue that the referee should have halted the fight. In the second half of the contest, Salido tired a little, and let Vargas come on to win half of the last six rounds. At the end of the fight, Salido looked like he’d easily won the bout by a nine rounds to three margin, but the judges scored it 115-113 for Vargas, 114-114 and 114-114. Boxing News 24 had Salido winning by a 117-111 score.

“I’ve been patient. I’ve been waiting for this fight for two years and now it’s finally here,” Vargas said. “It’s going to be a war. I did a few different things in preparation for this fight. I worked on different strategies, but we’ll see how the fight goes…My goal is to reclaim the world title.”

You have to hope for Vargas’ sake that he’s been drinking from the Fountain of Youth lately, because he’s going to need to be the best version of himself on Saturday night when he gets in there with Berchelt. Vargas can’t look like the shot fighter that lost to El Alacran Berchelt in 2017, and the fighter that beat the lower level fighters Salka and Smith in his last two fights since then. Vargas has got to get back to the guy he was when he fought Miura. But even that version of Vargas would likely be WAY over his head against a talented fighter like Berchelt. There are levels in boxing, and Berchelt looks like a guy that was always better than Vargas.

If Vargas gets beaten up the same way he did in the first fight with Berchelt, he’s going to need to think seriously about retirement. There’s nowhere for Vargas to go. If he takes on WBA Super World super featherweight champion Gervonta ‘Tank’ Davis, he’ll likely get beaten even worse than he will this Saturday night. Likewise, Vargas doesn’t stand much of a chance against IBF champion Tevin Farmer, WBA ‘regular’ belt holder Andrew Cancio or WBO belt holder Masayuki Ito. Boxing is a young man’s sport, especially in the lower weight classes. You don’t see too many 34-year-old fighters like Vargas still competing at the elite level at that age. That might explain why Vargas has been matched carefully by his promoters at Top Rank against Rod Salka and Stephen Smith in his last two fights rather than being put in with the young lions like Eduardo Hernandez and Shavkat Rakhimov. Those fighters would likely tear Vargas apart. Hence he’s not fighting them.

Vargas still has the desire to mix it with the best like Berchelt, but the youth and talent isn’t there for him. Saturday’s business fight between Vargas and Berchelt could be the end of the road for ‘El Bandito,’ for all intents and purposes. Vargas’ promoters will likely put him back on a soft diet of weak opposition after he loses to ramp him up for another business fight in the future, but he’s no longer capable of defeating the talented fighters. It’ll be a mismatch every time Vargas losing. It’s too bad that boxing fans can’t see Berchelt fighting guys that are doing well, and still in their prime like Rakhimov, Lomachenko and Eduardo Hernandez. Berchelt would have his hands full against those guys. Top Rank needs to make these fights right now instead of trotting out old timers like Vargas for Berchelt to tear apart needlessly.

The hard hitting 24-year-old Navarrete dominated Dogboe in beating him by a 12 round unanimous decision five months ago on December 8 in a big upset at Madison Square Garden in New York. The taller 5’7″ Navarrete took the fight to the smaller 5’2″ Dogboe, beating him by the scores 115-113, 116-112 and 116-112. Navarrete used his 5 inch height and 10 inch reach advantage to get the better of Dogboe. It wasn’t just the size of Navarrete that was the telling factor in the fight. It was the punching power. Navarrete was the bigger puncher, and he got the better of Dogboe throughout the fight. However, Dogboe still made it competitive with his nonstop attacking style of fighting. There was no quit in Dogboe. He attacked Navarrete from start to finish, and made the fight more competitive than it otherwise would have been.

“Navarrete couldn’t knock me out when I was at my worst, and now am I at my best,” Dogboe said. “I am a much more fit boxer this time around, and it is my mission to become world champion once again.”

Dogboe was fit against Navarrete last December. That’s not why Dogboe lost the fight. Navarrete just had too much size and punching power for the much smaller 5’2″ Dogboe. That’s not going to change. Dogboe will STILL be the smaller, weaker fighter come Saturday night, and the outcome will likely be the same as the first fight if not more tilted in Navarrete’s favor.