Hearn: ‘If Ortiz wants Joshua next, he can have it’ 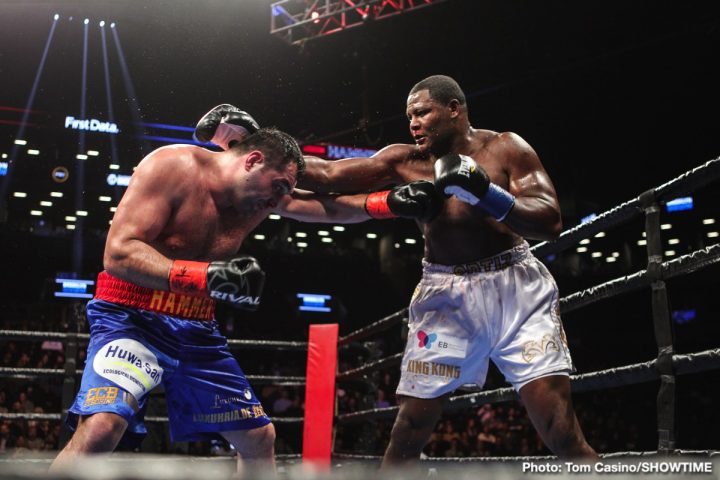 By Barry Holbrook: Eddie Hearn says he’s willing to let Luis ‘King Kong” Ortiz face IBF/WBA/WBO heavyweight champion Anthony Joshua next if he still fancies taking the fight. Hearn offered Ortiz (31-1, 26 KOs) $7 million to step in as the replacement for Jarrell ‘Big Baby’ Miller for June 1 at Madison Square Garden in New York, but he chose not to take the fight.

Ortiz’s promoter was looking to get the best deal possible for him for a fight against Joshua. Whether Hearn gave him a chance to still take the fight before walking away is unknown. Ortiz needed more time to get in shape for the fight than what they were offering. At 40, Ortiz isn’t a spring chicken like the 29-year-old Joshua, so he needs more time to get ready. If Ortiz’s promoter felt that he deserved more than the $7 million that he was offering to them, then you can understand why he would turn it down. $7M sounds like a lot of money, but when you factor in what Joshua is likely getting for the fight, then it’s maybe not so great. If Joshua is making over $30 million per fight, then the $7 million doesn’t sound like such a great deal. It all depends on how much Joshua is getting. Hearn is obviously offering Ortiz a flat fee for the Joshua fight instead of a percentage deal. I’m sure that Ortiz would likely prefer a percentage cut of the revenue rather than Hearn giving him a flat offer. A fight between AJ and Ortiz might bring in tons of money.

”That was AJ’s first choice. It was never ideal,” Hearn said to Boxing Social about Luis Ortiz being Joshua’s first choice. ”That was a fight where Rob McCracken said, ‘If you want him and feel comfortable with three weeks of southpaw sparring, we’ll do it.’ We made them an offer of $6 million. That didn’t do it. We made them another offer of $7 million. That was probably eight times what he got for the Deontay Wilder fight. He still turned it down. It shows you everything you need to know. Who is turning it down? It is Luis Ortiz? It is his manager? Is it his adviser? Is it his promoter? Is it the network? People are starving these fighters opportunities to change their lives and it’s sad. Listen, if Ortiz wants to go next, he can have it next,” Hearn said.

It helps Hearn if he takes the Ortiz fight for Joshua, because he’s likely to face Wilder in a rematch in either December or in early 2020. There would be huge interest from the U.S boxing public in seeing Wilder and Ortiz fight each other a second time.

”They’re being told what to do,” Hearn said about fighters like Ortiz that turn down the fight with Joshua. ”They should be the one saying, ‘I’m taking it. $7 million, my life is complete. My kid’s life is complete. Their kids’ life is complete. I believe I can beat AJ.’ Either they don’t believe they can beat AJ or someone is telling them not to take the fight. Everyone said it, but who knows?” Hearn said when asked if he thinks that Ortiz rejected the offer because he’s on a cycle of PEDs. ”There’s a massive problem with PEDs in America. No one is getting tested unless you put them in VADA testing, which we just did and one failed three tests with three different substances. If you’re not getting tested, what do you expect? It’s almost encouraging cheating, if you’re not getting tested. So it’s a major problem in America, and someone has got to act. People say Ortiz didn’t take the fight because he’s on a PED cycle. I don’t know. That’s speculation, isn’t it? I said it, but he’s been busted before,” Hearn said about Ortiz.

Hearn doesn’t know why Ortiz’s promoter failed to make the fight happen. Instead of speculating about whether Ortiz was PEDs, Hearn should see it as a situation where his promoter wanted a better deal than the one that he offered to them.

Joshua is going to need a good opponent after he finished up with Andy Ruiz Jr. on June 1. Ortiz would be perfect. If Joshua doesn’t fight Ortiz, then he’ll be looking at the likes of Adam Kownacki or Kubrat Pulev. Those are good heavyweights, but they’re not going to attract as much interest in the U.S as a fight between Joshua and Ortiz will. 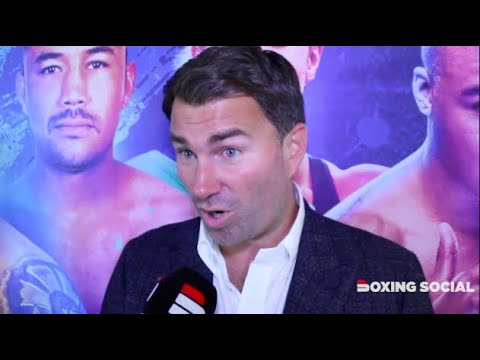