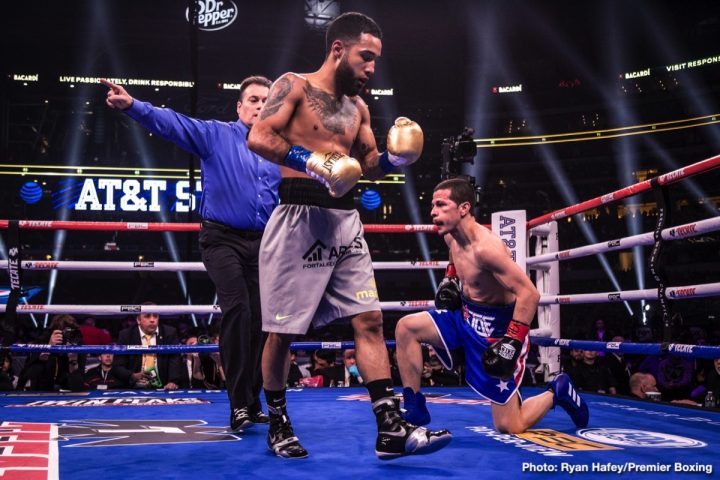 Nery being put in an impossible situation if he faces Payano

Nery, 24, will be in the first fight of the pay-per-view portion of the card, which is why it’s important that a good opponent be selected for him to fight. Payano, 35, would be disappointing option for Nery, as it would put him in an impossible position where he would need to try and outdo the first round knockout performance by Naoya Inoue last year on October 7 at the Arena, Yokohama, in Japan.

The talented southpaw Nery is an excellent with power perhaps even better than Inoue, but he won’t gain anything in fighting Payano unless he stops him equally as fast as Inoue did. It’s not a good situation or for the paying boxing fans to see Nery put in a position where he’s going to be looking to knockout an older fighter that was recently stopped in the first round. Payano used to be a good fighter when was younger, but his recent losses to Inoue and Rau’shee Warren have shown he’s not the same guy. It won’t be fair to the fans if Nery goes out there trounces Payano in the first round. It won’t even be sporting.

Warren, 32, isn’t much of an improvement over Payano for Nery to fight. Warren was beaten in his last fight by Oubaali (15-0, 11 KOs) by a 12 round unanimous decision in a failed bid to win the vacant World Boxing Council bantamweight title on January 19. Oubaali won the fight by the scores 115-113, 116-112 and 117-111. Boxing News 24 had Oubaali winning by a 9 rounds to 3 score. It was a clear victory for Oubaali. If this all Nery’s management can find him, then there’s much you can do. Warren is a weak puncher. He won’t last long with Nery. This could be a short and brutal.

Nery made his debut with Premier Boxing Champions on the undercard of Errol Spence Jr. vs. Mikey Garcia on March 16 in stopping former IBF super flyweight champion McJoe Arroyo (18-3, 8 KOs) in the fourth round at AT&T Stadium in Arlington, Texas. Nery knocked Arroyo down four times in the fight to become the first fighter to knock him out during his career. Nery had something to accomplish in facing Arroyo. It’ll be a different story of Nery faces Payano. He would be trying to top the first round knockout that Inoue recently scored. The only way for Nery to outdo what Inoue did is if he knocks Payano out in the opening seconds of the fight. It’s possible, but it won’t be interesting to watch, because Nery will be trying to take Payano’s head off the entire time with his powerful left hand shots.

It’s too bad Inoue is fighting in the World Boxing Super Series bantamweight tournament. It would be interesting to see Nery and Inoue fight each other. However, with Inoue reportedly on the verge of signing with Top Rank, we might not get a chance to see those two face each other anytime soon. The good news is both guys are still young, so at some point, Nery and Inoue could face each other in the future.

Nery lost his WBC 118-pound title last year in March when he failed to make weight for his rematch against former WBC bantamweight champion Shinsuke Yamanaka (27-2-2, 19 KOs). Nery came in three pounds over the bantamweight limit at 121 lbs., and lost his title on the scales. Nery had no problems stopping the 37-year-old Yamanaka in the second round. Since that fight, Nery has stopped his last three opponents and looked incredible in beating Jason Canoy, Renson Robles and McJoe Arroyo.


« Keith Thurman in no hurry to face Errol Spence