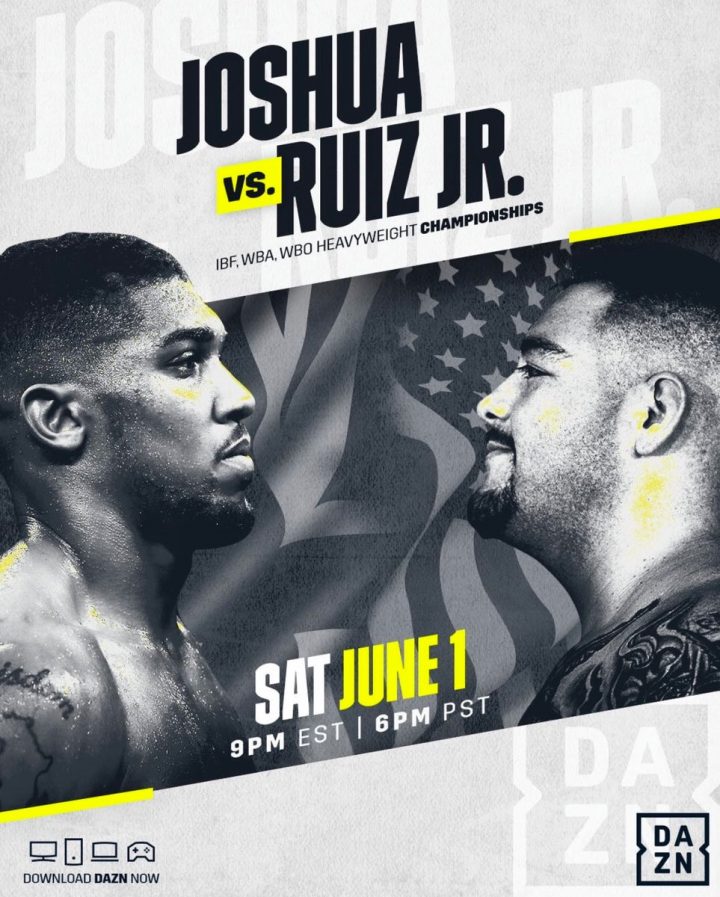 By Trevor McIntyre: It’s now official that heavyweight champion Anthony Joshua (22-0, 21 KOs) will be making his next title defense against American Andy Ruiz Jr. on June 1st on Sky Box Office and DAZN at Madison Square Garden in New York.

The 260+ pound Ruiz Jr. doesn’t look the part of a world title challenger, but he fights better than he looks. That’s what Joshua’s promoter Eddie Hearn is hoping for. It would be bad if Joshua blows out Ruiz Jr. in the first round.

There isn’t a lot of buzz from boxing fans at the news of the Joshua vs. Ruiz Jr. fight being confirmed today. Hearn likely thought this fight would go over real well with fans in the U.S and worldwide. It hasn’t. The timing of the announcement is bad. Most U.S fans are concentrating on the arguably more competitive fight on paper between middleweight champions Saul Canelo Alvarez and Daniel Jacobs, which will be taking place this Saturday night in Las Vegas, Nevada. It would have been better if Hearn had delayed the announcement of the Joshua vs. Ruiz fight until at least Friday of next week. That way the boxing fans would no longer be talking as much about the Canelo vs. Jacobs fight. A one week delay of the Joshua vs. Ruiz Jr. fight wouldn’t have hurt it.

Many fans are complaining about the Joshua-Ruiz fight, and wondering why Joshua is fighting Ruiz Jr. instead of Luis Ortiz, Michael Hunter or Oleksandr Usyk. The fans that see Ruiz as a decent opponent point out that there wasn’t much time to find a replacement for Joshua to fight after his originally scheduled opponent Jarrell Miller was popped in three drug tests. They also point out that Ruiz Jr. is a better fighter than he looks. Let’s hope so.

If Joshua crushes Ruiz Jr., the fans are going to be critical afterwards, especially if this type of match-making becomes a habit . If Joshua is going to be coming to the U.S each time for mismatches against guys that have no chance of beating him, then it’s going to be a negative for his career. He won’t become a star in the U.S. He’ll be like Amir Khan, a British fighter, who fought in the U.S for 10 years, and failed to make it to stardom due to a combination of weak match-making and his losses to Danny Garcia, Lamont Peterson and Saul Canelo Alvarez.

The Southern California native Ruiz Jr. (32-1, 21 KOs) wasn’t the one that Joshua’s promoter Eddie Hearn wanted for him to fight for AJ’s debut in the U.S. Hearn’s initial choice was the well-spoke, 315 pound New Yorker Jarrell “Big Baby” Miller (23-0-1, 20 KOs), who would have done most of the heavy lifting in promoting the fight with his verbal skills, and his ability to create attention with his actions during the news conferences. Unfortunately, Miller tested positive for banned substances three times after the fight was signed, and he was removed from the fight. The 29-year-old Ruiz Jr. was found as the replacement for Miller.

Hearn likes Ruiz because he says he’ll attract Mexican boxing fans to see the Joshua fight on June 1 at MSG in New York, and on DAZN.

“This is my chance to make history,” said Ruiz Jr. to Sky Sports “I want to be one of those greats like Julio Cesar Chavez, Mike Tyson, Evander Holyfield, Lennox Lewis. I want to be in that category. I think the fight is going toe-to-toe, two guys smashing each other’s faces. I’m going in there to throw combinations like I’ve never done before, to improve my speed.”

Just going by the way that Ruiz Jr. looked in his last fight against the 6’7″ Alexander Dimitrenko earlier this month on April 20th, Ruiz Jr. might not last long against Joshua. The 36-year-old Dimtrenko was hitting Ruiz Jr. at will with right hands and jabs. He big Ukrainian heavyweight couldn’t miss with his right hand. The problem that Dimitrenko had is he’s not a big puncher, so he couldn’t hurt Ruiz Jr. with any of his shots, but he was hitting frequently. Joshua is going to have it pretty easy. He’ll have a slow, wide, plodding target for him to hit with his power shots. Joshua won’t need to use his feet to elude Ruiz like he did against Joseph Parker. He’ll be able to hit Ruiz Jr. with everything in his arsenal.

Having an opponent this beatable could backfire on Joshua by turning off the U.S boxing fans that he’s hoping to impress. The U.S fans aren’t impressed with they watch mismatches. The fights that the fans talk about are competitive ones where the two guys go to war, and there’s drama. Joshua vs. Ruiz Jr. looks like a mismatch on paper. Joshua’s promoter Eddie Hearn has put him in a showcase fight to make him look good to the American public. It might not workout well for Joshua to accomplish Hearn’s vision.

“I’m going to bring the titles back to Mexico, it’s going to mean everything,” Ruiz Jr. said. “I think being so tall, he [Joshua] fights like a big robot. I think with my style, my speed, my movement, I don’t think he’s fought anybody like me. It’s going to be a whole different ball game.”

Ruiz Jr. isn’t that big of a puncher. He can punch a little if his opponent is stationary, and just standing there for him to hit them with right hands, but he’s not a big puncher. Ruiz’s KO percentage is 64. That’s a respectable knockout percentage, but when you look at the opposition that Ruiz Jr. has fought during his 10-year pro career, then it’s pretty clear that’s not a huge puncher because he’s mostly fought journeyman level fighters. Ruiz Jr. was unable to knockout guys like Kevin Johnson, Franklin Lawrence, Joell Godfrey, Sergey Liakhovich, Theron Johnson, Homero Fonseca, Alvaro Morales and Juan Luis Lopez Alcaraz. Ruiz Jr. is more of a combination puncher in the Jarrell Miller mold, but he’s a lot shorter at 6’2″. Miller is 6’4″, and weighs over 300 lb.

“All the guys that he’s fought, they usually run around from him. I don’t think he’s good going back. I’m going to bring the pressure, the speed, and the combinations to him,” Ruiz Jr. said.

Hearn is saying that over 10,000 UK boxing fans will be traveling to the U.S to watch the Joshua vs. Ruiz fight live on June 1 at MSG. Hearn expects there to be a huge crowd. It’s a good thing that the British boxing fans will be showing up in big numbers, because this fight likely wouldn’t bring in a lot of fans if not for that. It’s the wrong location. Ruiz’s fans aren’t situated in the New York area. He’s from Southern California. Hearn had a New Yorker as Joshua’s original opponent in Jarrell Miller, which made sense given the location of the fight. But Miller out of the fight, having Ruiz Jr. isn’t ideal for location. Hearn had already booked MSG ahead of time, and that’s where Joshua wanted to fight because he was excited about the huge crowd that showed up to see the Saul Canelo Alvarez vs. Rocky Fielding fight on December 15.