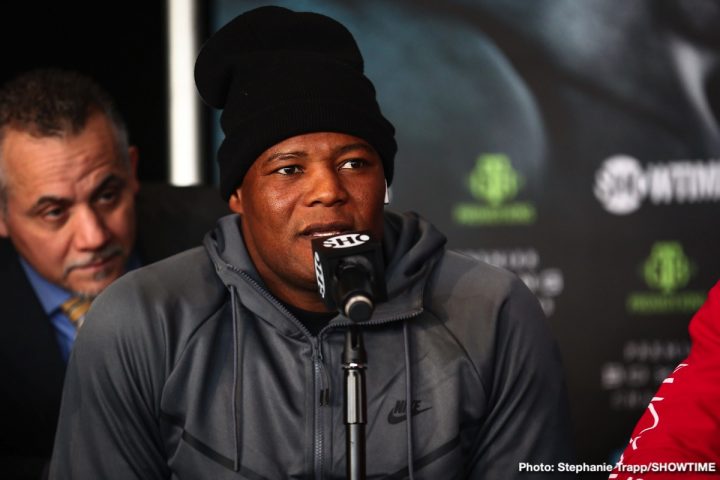 By Scott Gilfoid: Matchroom promoter Eddie Hearn revealed on Wednesday that the talented once beaten Luis ‘King Kong’ Ortiz (31-1, 26 KOs) turned down an offer of $7 million to challenge IBF/WBA/WBO heavyweight champion Anthony Joshua (22-0, 21 KOs) for his titles in his U.S debut on June 1 at Madison Square Garden in New York.

Speaking to IFL TV, Hearn said he initially offered the 40-year-old Ortiz $6 million. When they failed to agree to that offer, Hearn came back with a slight bump up to $7 million. When this wasn’t good enough, Hearn moved on, and that was the end of the negotiations.

In fairness to Ortiz, his manager said that he was willing to agree to the deal, but his promoter is the one that wanted a sweeter deal.

There are no winners in Hearn failing to sign Ortiz

The way that Hearn is carrying on, he makes it sound like it’s only Ortiz that lost out on this deal. Hearn doesn’t see the big picture. It’s not just Ortiz that lost out. Joshua is missing out as well. Instead of Joshua having a great talent to show off his boxing ability to the casual American boxing fans on June 1, he’s likely going to be fighting the heavyset Andy Ruiz Jr. (32-1, 21 KOs) at Madison Square Garden on DAZN. This is a MAJOR loss for Joshua as well Ortiz. Hearn doesn’t seem to realize that he NEEDED Ortiz for Joshua to get attention from the U.S boxing public, because they don’t know who Andy Ruiz Jr. is. One reason for that is Ruiz Jr. has fought only three times since 2016. Ruiz Jr. hasn’t fighting often, and his fights have been on undercards. It’s a loss for Joshua that he’s not getting the Ortiz fight. Hearn can celebrate all he wants and brag about how Ortiz didn’t accept the $7 million that he offered, but Joshua isn’t coming out ahead here. There’s no gain in Joshua fighting Ruiz Jr. rather than Ortiz, is there? Aside from Hearn saving a little bit of money, which probably isn’t that much of a savings, he’s likely to receive less attention from the U.S boxing public by not having Ortiz as the opponent for Joshua. Overall, it’s a huge missed opportunity for Joshua as well as Ruiz. There are no winners in this situation. Both guys lose, and it’s interesting how Hearn doesn’t seem to understand that. Both guys lost, but it’s more of a loss for Joshua, because this is his debut in the U.S and he needed a fighter that the American boxing fans have heard of like Ortiz. Hearn is gloating about Ortiz’s team not taking the deal, but he’s clearly understanding how this actually hurts Joshua more. Ortiz is going to be fine. He’ll soon be fighting WBC heavyweight champion Deontay Wilder in a rematch. Wilder will benefit from having Ortiz as an opponent. In contrast, Joshua will be stuck with a challenger that looks fat and out of shape. Instead of gloating about Ortiz not agreeing to the offer, Hearn should be upset. Joshua would have received HUGE publicity if Ortiz was his opponent. Joshua is losing out, and so is Hearn, but he sounds that he doesn’t fully understand that yet.

Ruiz Jr. is a good talent, but he’s got several strikes against him in comparison to the 6’3″ Cuban southpaw Ortiz. Those strikes are as follows:

– Fights out of the orthodox stance. Ortiz is a southpaw, and would be a more difficult opponent for Joshua to deal with due to his straight lefts he’d be nailing him with

– Appearance-wise, Ruiz Jr. doesn’t look as fit as Ortiz. With this being Joshua’s first fight on American shores, the casual boxing fans can only judge him by the level of his opponents. As such, it would arguably look more impressive in the eyes of a lot of boxing fans if Joshua’s opponent were a fit fighter like Ortiz than a guy with a weight problem like Ruiz Jr. Casual will likely make a snap judgement when they see how heavy Ruiz Jr. looks during the fight, and they won’t be as impressed with Joshua. Once can guess that the initial thoughts for a lot of the fans will be, ‘What on earth is this guy Joshua doing fighting someone that looks so out of shape? He must not be very good to be fighting these kind of guys.’