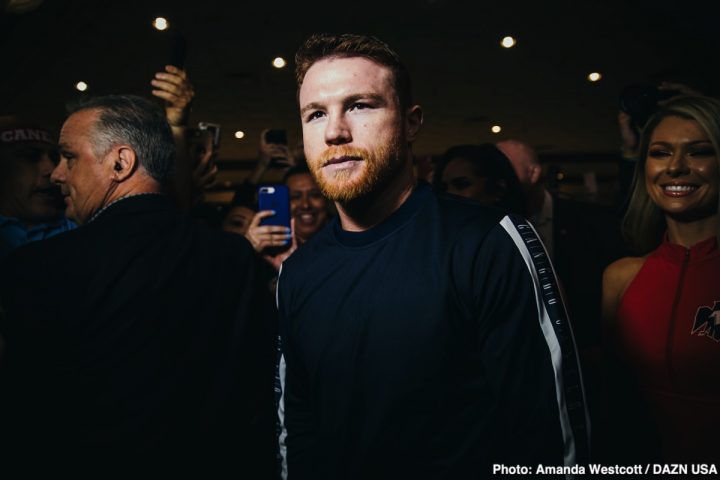 By Jeff Aranow: Saul Canelo Alvarez took a verbal shot at his nemesis Gennady Golovkin on Tuesday by telling the media that Daniel Jacobs is a MUCH better fighter than him, more complicated and greater skilled.

Canelo (51-1-2, 35 KOs) is fighting Jacobs this Saturday night on DAZN in a middleweight unification fight at the T-Mobile Arena in Las Vegas, Nevada.

If the Golden Boy Promotions star Canelo is being real with people by saying that Jacobs is a better fighter than Golovkin, then he’s going to have to have to knock him out for him to win on Saturday. GGG got the better of Canelo in their first fight in 2017, which was scored a 12 round draw, and he came close to beating Canelo in their rematch last September. Canelo won that fight by a 12 round majority decision by the scores 115-113, 115-113 and 114-114, but the fight could have gone the other way. If Jacobs is a better fighter than Golovkin, it puts Canelo in a situation where he’ll need a knockout to win.

“Technically, he’s a much better fighter [than Golovkin]. His abilities are much better. He’s more difficult,” Canelo said about Golovkin on Tuesday while meeting with the boxing media to discuss his upcoming fight with Jacobs on Saturday night. “At the top,” Canelo said when asked where he rates Jacobs of the former world champions that he’s faced. “One of the most complicated, one of the most complete styles in boxing.”

Golovkin (38-1-1, 34 KOs) already beat Jacobs in 2017 by a 12 round unanimous decision. It looks like Jacobs’ superior technical skills couldn’t overcome the power, heart and aggression than Triple G brought to the table in that fight. As far as Canelo goes, the fans think Golovkin won the first fight, but was robbed, and in the second, it should have been a draw. The boxing public saw Canelo get off to a fast start in the first six rounds, and then he got tired and gave away five of the last six rounds of the contest.

The fight took place at the T-Mobile Arena in Las Vegas. A lot of fans saw it as a situation where Canelo was given preferential treatment by the judges. In looking at the two Canelo-GGG fights as a whole, if you ignore the huge controversy of the first fight and focus on how close the second one was, you can argue that there’s nothing that separates Canelo and Golovkin at this point. They’re basically tied. Canelo failed to prove that he was the better fighter than Golovkin, even though the scoring was favorable to him in the two fights. The fans didn’t agree with the way the Nevada judges scored those fights. So, instead of Canelo being seen as the winner, he’s viewed differently by non-biased fans, who think he failed to show that he was superior fighte. That’s why it’s important that Canelo fight GGG a third time, and preferably in a neutral venue rather than insisting that Golovkin come back to Las Vegas to fight him for the third fight. If Canelo is a better fighter than GGG, he should be able to prove that by fighting in different venues.

“Not only Mexican fighters have a difficulty with a fighter that moves like Jacobs. Any fighter would have problems, but that’s what we prepare ourselves for,” Canelo said when asked about whether Mexican fighters have problems with guys that move a lot in their fights. “We’re ready for this fight. We have the experience. We’ve had the necessary preparation in the gym,” Canelo said.

Jacobs’ movement could be a problem for Canelo. It doesn’t matter if Canelo has prepared for it. Canelo has never done well against fighters that move. He doesn’t have the legs to cut off the ring. However, luckily for Canelo, Jacobs isn’t a great mover. Sergiy Derevyanchenko and Golovkin were both able to easily cut off the ring on Jacobs and force him into exchanging with them. Canelo will likely be able to do the same thing. Jacobs isn’t going to win the fight on Saturday with his movement. If he thinks he’s going to impress the judges by running around the ring, he’s sadly mistaken. The T-Mobile Arena is Canelo’s venue. Jacobs won’t win this fight unless he beats Canelo the way that Floyd Mayweather Jr. did or by blasting him out. Anything other than that will result in a loss for Jacobs.