Andre Rozier: Canelo is NOT more dangerous than GGG 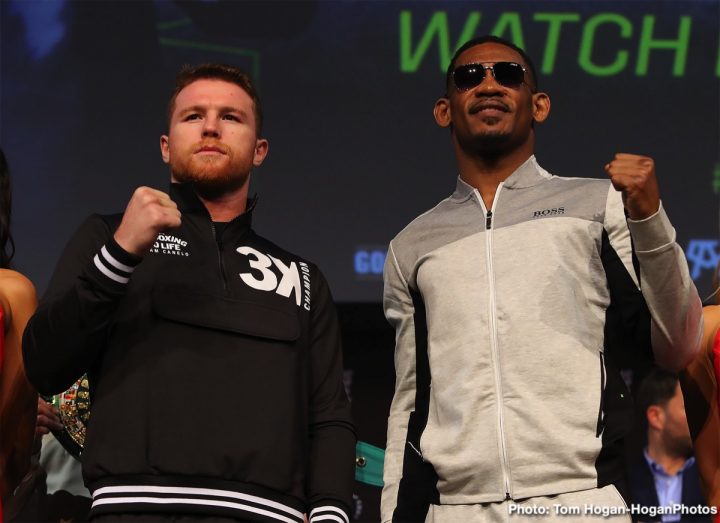 By Jim Dower: Daniel Jacobs’ trainer Andre Rozier doesn’t see Saul Canelo Alvarez as being more dangerous opponent than Gennady Golovkin was for the “Miracle Man” in their fight two years ago. Rozier says he sees Canelo as a “different fighter,” but he does think he’ll be tough in his own way, and they’re taking him very seriously as an opponent ahead of their unification fight this Saturday night on DAZN at the T-Mobile Arena in Las Vegas, Nevada.

Golovkin (38-1-34 KOs) beat Jacobs by a 12 round unanimous decision in March 2017. It was a close affair. The difference in the fight was Golovkin knocking Jacobs down in the fourth round, and the hurting him with an uppercut in the 10th round.

“I don’t think he’s more dangerous. I think he’s just a different fighter,” Andre Rozier said to Fighthub about Canelo not being more dangerous than Golovkin. “Every fighter can give you problems. We’ve prepared for that. Daniel is going to be ready.”

One way of judging whether Canelo is more dangerous than GGG is to ask the question of whether fighters that the Mexican star was forced to go the distance with would be able to go the full 12 rounds with Golovkin. Erislandy Lara, Austin Trout, Miguel Cotto and Julio Cesar Chavez Jr. all went the full distance with Alvarez. Those guys likely wouldn’t make it the full 12 rounds against GGG, especially at the time that Canelo fought them all. Golovkin was knocking out everybody between 2013 to 2016.

“I think they thought it would hinder Danny,” Rozier said about the rehydration clause. “He made weight for the [Sergiy] Derevyanchenko fight on Friday before, and then on Saturday morning, and then he was ready to perform on Saturday evening.”

Jacobs, 32, is really bothered by the intent that he believes Golden Boy had in putting the rehydration clause in the contract. He thinks they thought they would be able to make him small and weak enough for Alvarez to win the fight.

“I don’t think so,” Rozier said when asked if Jacobs will be weakened by the secondary weigh-in on Saturday morning. “The second weigh-in will be at 8:00 A.M in the morning. We’ll have the full day to get back on track to where he’s comfortable. I don’t think it’ll make a difference at all. I think it was just a weight ploy that was a waste of time.”

Having secondary weigh-ins hurt both fighters. Golden Boy Promotions might not realize that they could be hurting their own fighter Canelo with the rehydration limit. It might be better in the future for Golden Boy to just let Canelo win fights without trying to give him a helping hand by using rehydration clauses and catch-weights. If Canelo is really “The face of boxing,” as De La Hoya says he is, he should be able to win fights without them looking to give him a handicap. If Canelo is weight drained because of Golden Boy’s good intentions, he could lose the fight and they’ll be crying crocodile tears afterwards. As a fighter, you shouldn’t need your promoters to be having rehydration clauses that potentially can impact your own performance. Canelo would obviously prefer to not have to worry about getting up early in the morning on Saturday to be weighed a second time at 8:00 a.m. for the silly secondary weigh-in that his own promoters put in the contract for the fight. Golden Boy needs to let Canelo win on his own ability without trying to help him out by looking to weaken his opponents with a rehydration clause.

“I think we’ll have some fair judging taking place,” Rozier said. “I don’t think there will be bias, at least I hope not. If it’s a decision, it’ll be rendered to the appropriate direction of the athlete that won, and that’ll be Danny Jacobs. We’re going to do that anyway so it won’t matter,” Rozier said in talking about Jacobs making sure the rounds aren’t close. “These are two gifted athletes. Usually when you have two gifted athletes, you have a decision at the end of the fight, and that’s what I think is going to happen.”

With the spotlight that will be on this fight, it’s very likely that the judges will be bending over backwards to make sure they turn in realistic scores on Saturday for the Canelo vs. Jacobs fight. The last thing the judges will want to happen is for them to turn in crazy scores that will have them ridiculed by the entire world like the judge that scored the first Canelo vs. Golovkin fight for Canelo by a 10 rounds to 2 score.