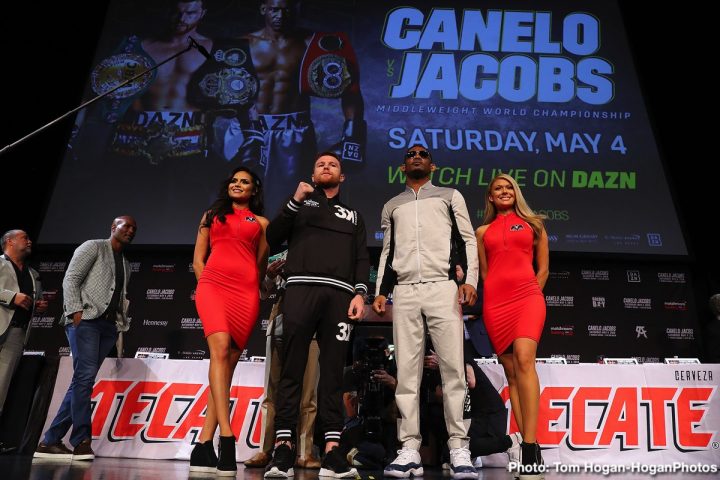 By Darren Paradise: Before the bell even sounds inside the T-Mobile Arena this coming Saturday night, the general consensus is that when unified middleweight world champion Saul “Canelo” Alvarez attempts to wrest the IBF title from current holder Daniel “Miracle Man” Jacobs he is already three rounds up on the judges’ scorecards, some even believe that two of those rounds may have been scored 10-8!

This consensus is of course understandable given Alvarez’s history of favorable verdicts, but let’s play devil’s advocate and take into consideration the controversy surrounding Canelo’s previous two fights, is it really possible that the same three judges who scored a unanimous decision victory for Canelo over Gennady Golovkin in their rematch can really favor Canelo once more in a close tactical battle fought over twelve rounds? In fact could Dave Moretti, Glenn Feldman and Steve Weisfeld in a bid to ridicule any talk of favoritism and corruption be swayed to score any close rounds to the “Miracle Man”? Could it be Jacobs who starts the fight with an insurmountable lead and Canelo the one that needs to take any decision out of the judges’ hands. Golden Boy may be delighted that the appointment of these three judges has not been contested, but is it actually team Jacobs who are rubbing their hands with glee?

Without doubt a supreme talent and the heir apparent to Floyd “Money” Mayweather, Canelo (51-1-2 35 KOs) has followed the same calculated career path as mentor Oscar De La Hoya, feasting on an abundance of either declining, lighter or overmatched opposition. Do they feel that Jacobs is a fighter in decline? Is it a couple of below par performances against B level fighters in his last two outings together with a slightly “chinny” reputation that the door has opened for Daniel Jacobs to receive this shot at the “pound for pound” king? Jacobs (35-2, 29 KOs) is no stranger to adversity, he was tipped for the top right from the start, rebuilding his career after being derailed by Dmitry Pirog in 2010 then beating his well documented battle with bone cancer and it should also not be forgotten it was just two years ago that boxing politics prevented him from being awarded a clear decision victory over GGG in a fight many felt was mission impossible.

There is certainly a lot riding on this fight, an unpopular decision in the first “super fight” to be screened on DAZN is certainly not an ideal scenario, but as the face of boxing and the biggest pay per view star in the world a loss here for Alvarez could be catastrophic not only for him but also for the DAZN platform and its bid to revolutionize the way we view boxing and sports as a whole. Ideally for the “money men” involved in this promotion it seems like a non-controversial, classic encounter that culminates in a highlight reel knockout for Canelo Alvarez will be the perfect way to celebrate Cinco de Mayo. The question is have Daniel Jacobs, Dave Moretti, Glenn Feldman and Steve Weisfeld read the script?