Andrade and Sulecki meet up for June 29 fight on DAZN 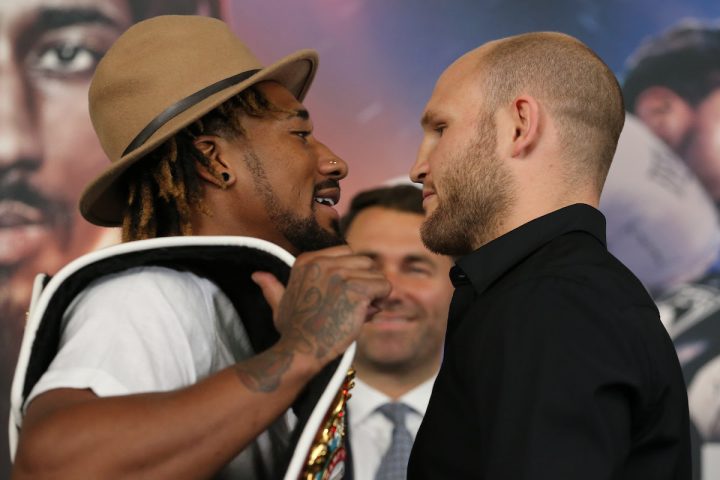 Demetrius Andrade and Maciej Sulecki came face-to-face for the first time as they prepare to clash in Andrade’s first hometown fight and second defense of his WBO World Middleweight title at the Dunkin’ Donuts Center in Providence, Rhode Island on Saturday June 29, live on DAZN in the US and on Sky Sports in the UK.

Andrade (27-0 17 KOs) has had to wait to top the bill in his Providence backyard but does so in the most important fight of his spotless career – with promoter Eddie Hearn rightly calling ‘Boo Boo’s’ WBO strap the missing piece of the undisputed puzzle at 160lbs.

The two-time two-weight World ruler has made no secret of his desire to fight WBA, WBC, IBF and Ring magazine king Canelo Alvarez for all the marbles, so victory against the rugged Pole is a must on June 29.
Sulecki (28-1 11 KOs) has promised to rip the title from Andrade and launch himself into that A1 position himself, and the 30 year old showed both his ability, desire and heart in a rollercoaster clash with Gabriel Rosado in Philadelphia in March.

That win landed Sulecki the shot at Andrade, but the champion believes that this is a breakout fight for him and the challengers style will provide him with the perfect showcase for his undisputed credentials.

“It’s that time – Providence, Rhode Island – wow,” said Andrade. “It’s my homecoming, it’s an exciting moment for me, my family and my team. It’s a great honor to be headlining at home.

“Maciej is a good fighter, there’s no doubt. He’s had some tough grueling fights, he’s shown balls to win, but on June 29 that won’t happen. I’ve got an answer for everything he brings and this is my time – he’s got this far, but he goes no further – no one is stopping this train.

“I’ve been through a lot, people see me smiling but I’ve had to fight hard to be World champion, twice, and now I’ve got the chance to show my people what I do. The wolf is coming out, I’m breaking bones and biting hard – Sulecki comes to fight ad that’s what I want, he’s going to show my skills off and show that I am the man in this division.”

“I want to thank the Polish fans and American fans for supporting me,” said Sulecki. “I am here because I want to win this fight and I will be 100 per cent ready. He’s a good fighter, a two-time World champion, but he’s not boxed anyone as good as me. It’s my dream to be World champion and on June 29 that dream comes true.”

“The WBO is the final link to undisputed,” said Hearn. “There’s a guy called Canelo with the other belts but you cannot be undisputed without this belt, and the winner on June 29 takes a step closer to being undisputed.

“Demetrius has been searching for that fighter that comes to fight – and Maciej comes to fight every time. He will never, ever go into his shell, he’s coming to fight for every second of the 12 three-minute World championship rounds.

“I have wanted to bring a fight to Dunkin’ Donuts since we signed Demetrius and this is the first World title fight in Rhode Island in 28 years – we need the city to get behind this event and this great Providence fighter, this is your opportunity to come out and support an elite fighter that is one of your own. 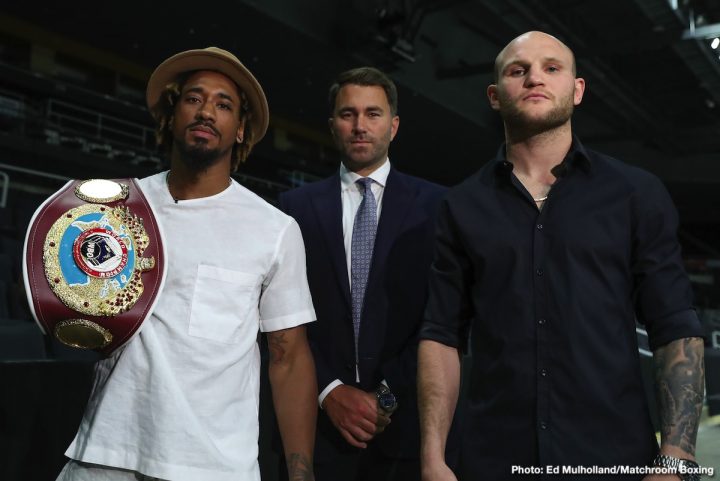 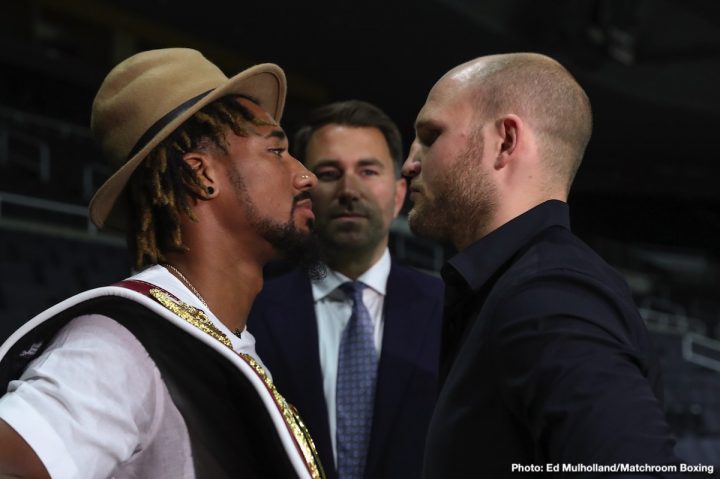 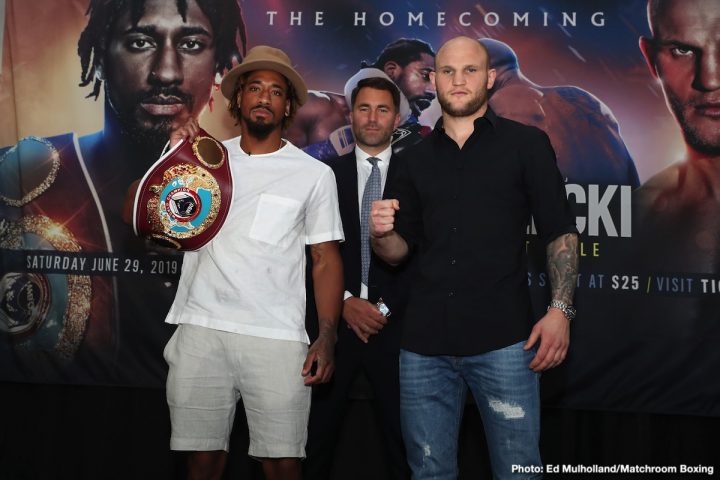 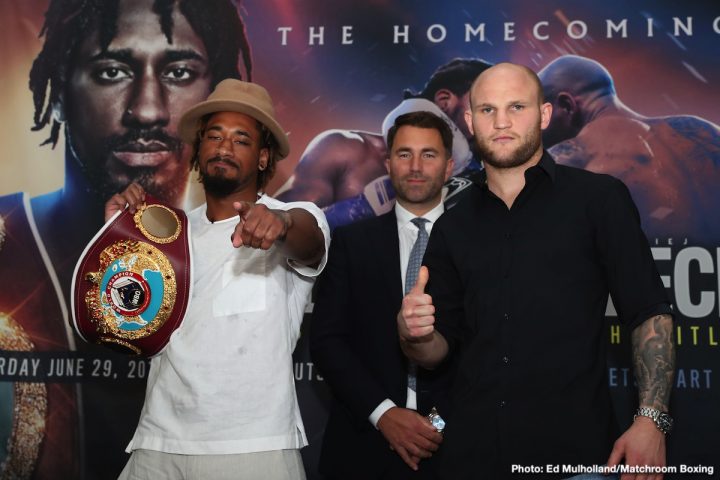 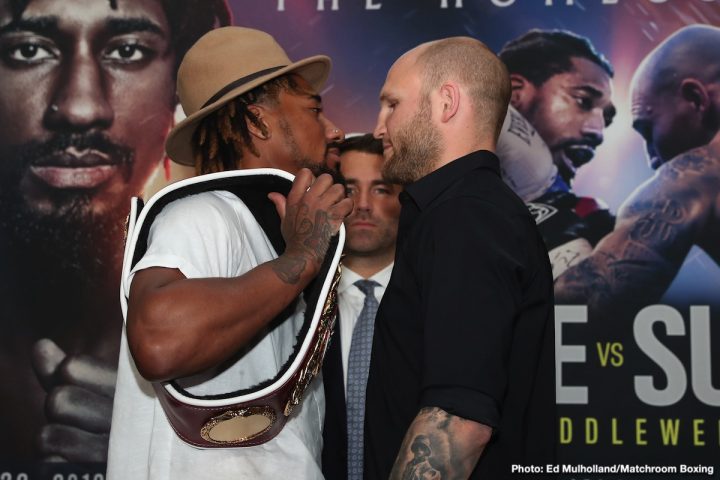 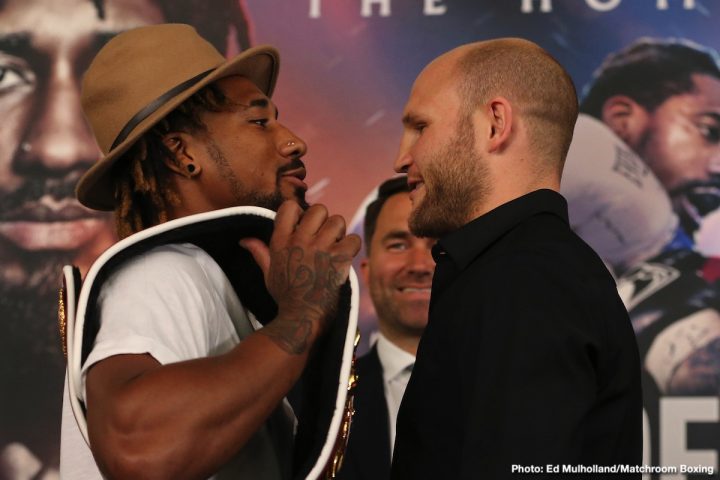 « Thurman: ‘Pacquiao won’t win one round against me’

Hearn has invited Wilder to attend Joshua vs. Ruiz Jr. on June 1 »