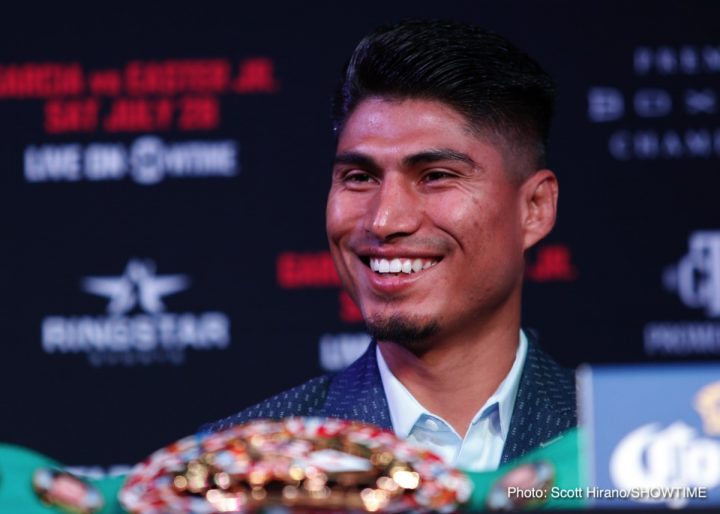 By Dan Ambrose: Mikey Garcia (39-1, 30 KOs) will be meeting with World Boxing Council president Mauricio Sulaiman next week to talk about what he plans on doing with his WBC lightweight title, according to ESPN Desportes.

The WBC has been very patient in choosing not to order Garcia to defend against his mandatory for 2 years now, but it looks like they’re about to order him to face #1 WBC Luke Campbell (20-2, 16 KOs). Whether Garcia chooses to go along with the WBC’s wishes remains to be seen. He could vacate the WBC strap, and move up to 140 or 147 on a permanent basis.

Mikey, 31, has held the WBC 135 lb belt for two years since stopping Dejan Zlaticanin in the third round on January 28, 2017, and now two years later, he still hasn’t defended the belt against any of the contenders waiting for a title shot.

Instead of Garcia defending his WBC lightweight title, he went up to 140, and fought Adrien “The Problem” Broner and IBF light welterweight champion Sergey Lipinets in 2017 and 2018, beating both of them. Mikey then moved back down to lightweight and defeated IBF 135 lb champion Robert Easter Jr. by a 12 round unanimous decision in a unification fight last year on July 28, 2018. Most recently, Mikey moved up to welterweight and unsuccessfully challenged IBF champion Errol Spence Jr. Mikey was easily beaten by Spence in a one-sided decision defeat on Marcy 16 on Fox Sports PPV at AT&T Stadium in Arlington, Texas.

It would be perfectly understandable if Mikey chooses to vacate his WBC lightweight title rather than defend it against the southpaw Campbell, who is a 2012 Olympic medalist from Great Britain. With the big money that Mikey made in the Spence fight, he might not be too excited about getting a huge pay cut in defending his WBC title against a non-draw like Campbell in the United States. Garcia vs. Campbell wouldn’t be a big sell in the U.S, as it’s not a pay-per-view worthy fight. At the same time, there would be some risk involved in Mikey taking that fight, being that Campbell has size, talent, punching power and boxing skills.

Mikey could lose that fight if he can’t hurt Campbell. It’s a tough match for Garcia to take with him coming off of a bad beating at the hands of Spence last March. Staying at lightweight will increase the pressure on Mikey to face WBA/WBO champion Vasiliy Lomachenko in a unification fight. Lomachenko and his promoters at Top Rank Boxing are pushing hard to make the unification fight with Mikey. If he stays at lightweight to defend his WBC belt against Campbell, it’s going to be a bad look if he chooses not to fight Lomachenko after that fight. It would be better for Mikey to give up the WBC lightweight title now while he has a good excuse for giving it up. Mikey can tell the boxing public that he doesn’t move all the way back down from welterweight to lightweight to defend the belt against Campbell. The fans wouldn’t say that Mikey is ducking the Campbell fight, because he’s not someone that was ever considered a threat to beating him.

If Mikey moves to 140, he’s still going to have problems with finding guys that he can beat without getting pummeled. Mikey took a lot of punishment in his win over Lipinets last year, and that fighter isn’t considered as talented as the top 140 pound fighters like Regis Prograis, Josh Taylor, Ivan Baranchyk, Maurice Hooker, and Jose Carlos Ramirez. If Mikey moves to 140, he would be expected to fight those guys, and it’s questionable whether he can handle those type of fighters. Those are guys that are plenty powerful, and they have good size. None of them are considered as big or as talented as Spence, but they all pack a punch and would have a big advantage over Mikey.

There’s money to be made by Mikey if he faces the winner of the World Boxing Super Series light welterweight tournament, but the tourney won’t wrap up until either late 2019 or early 2020. Mikey can’t just sit and wait on the winner. Staying at welterweight will be a problem for Mikey if he can’t fight better than he did against Spence. At this point, Mikey would likely be seen as the underdog against welterweights like Danny Garcia, Shawn Porter, Terence Crawford, Amir Khan, Keith Thurman, Manny Pacquiao and Yordenis Ugas. The fight that would have made sense for Mikey would be a match against Pacquiao, but that’s not doable right now after the way he was beaten by Spence. Pacquiao is in negotiations for a fight against Thurman in July. Marcos Maidana would be a good option for Mikey, but he’s not expected to make his official comeback until September. Maidana wouldn’t take on Mikey in his first fight back.

There are some boxing fans that feel that Mikey might be done as a fighter after his loss to Spence. There aren’t a lot of options for Mikey for winnable fights against top level opposition at 140 and 147. There’s a lot of lions in those weight divisions that could do the same thing to Mikey that Spence did, but worse. Spence appeared to take it easy on Mikey. The top fighters at light welterweight and welterweight would be coming after him to knock him out, because he’s not a big puncher and he doesn’t throw a lot of shots. At 135, Mikey’s power is impressive, but it hasn’t carried up when he’s fought at 140 and 147.