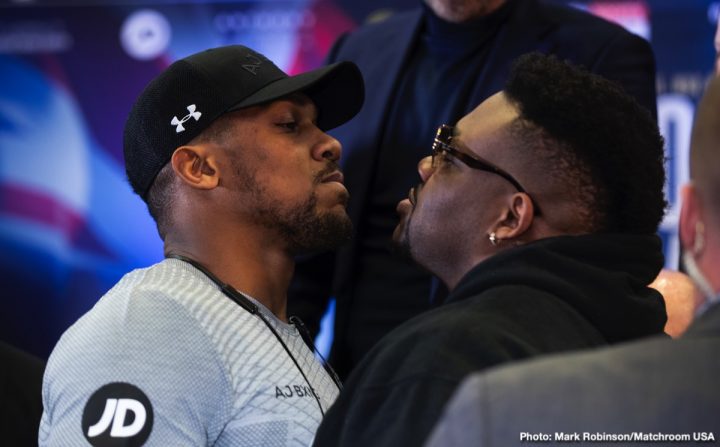 By Tim Royner: The WBA has handed down a six-month suspension to unbeaten Jarrell ‘Big Baby’ Miller for his three failed tests for the performance enhancing drugs GW1616, Human Growth Hormone [HGH] and EPO for his canceled fight against IBF/WBA/WBO champion Anthony Joshua. Miller was caught by VADA.

Miller was supposed to be facing Joshua on June 1 on DAZN and Sky Box Office at Madison Square Garden in New York. Miller would have received a purse of close to $5 million for the fight plus upside from the UK PPV.

The positive tests for Miller resulted in him being denied a boxing license by the New York State Athletic Commission.

The Brooklyn, New York native Miller can still fight, but he’s been removed the World Boxing Association’s rankings for six months until September.

“I think it’s fair,” said Miller’s co-promoter Greg Cohen to ESPN.com about his six-month suspension with the WBA. “It’s appropriate…I’m sure Jarrell will comply with the resolution. I do not think he has a choice, certainly, through this resolution, he is obligated to do so.”

Miller won’t look to fight until after his six month suspension is done, says Cohen. That makes sense, because it’s unlikely that Miller would get licensed by any state commission while he’s still under suspension by the WBA.

A lot of boxing fans see this as a slap on the wrist for Miller, as many of them would like to see him suspended longer than just six months for his positive tests. Of course, this suspension is in line with what other fighters are getting.

It’ll be interesting to see whether Miller tests clean in the future for his fights. Whether all of Miller’s fights will have testing or not is the question. It costs money to do testing. In a perfect world, every fight would have testing during the entire training camps to make sure there’s no bending of the rules by fighters, but that’s costly. Until there’s a way of having testing done that’s less expensive, it’s going to be difficult to catch a lot of the fighters that are choosing to use PEDs in order to gain an edge over their opponents.

Even superstar Saul Canelo Alvarez tested just last year for the banned substance clenbuterol, and received a six month ban. If Miller were to receive a more lengthy suspension than Canelo, it would look like he’s being given unequal treatment.


« Canelo will be too strong for Jacobs, says Santa Cruz