Canelo will be too strong for Jacobs, says Santa Cruz 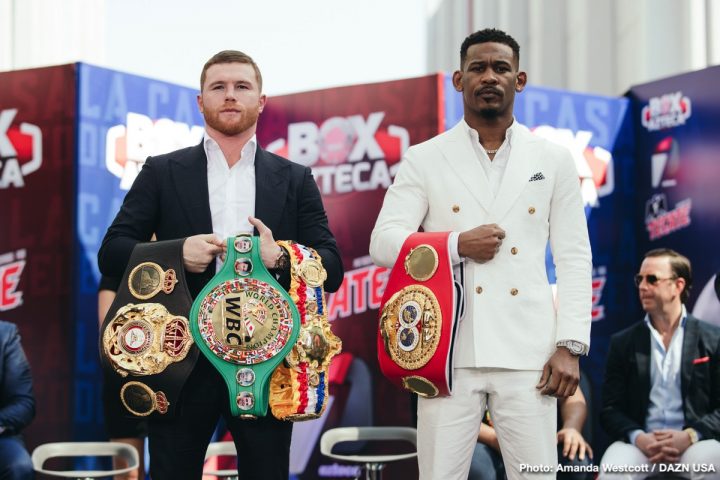 Santa Cruz has studied both fighters, and he concluded that Jacobs CAN’T hurt Canelo with any of shots. Santa Cruz notes that Gennady Golovkin, who some boxing fans feel is the hardest puncher in the middleweight division, wasn’t able to hurt Canelo in their two fights. Santa Cruz says if GGG can’t hurt Canelo, then Jacobs won’t. Santa Cruz thinks Canelo can hurt Jacobs with his hard punches, and he sees him scoring a knockout at some point in their fight on Saturday night.

Canelo-Jacobs will be taking place on DAZN this Saturday night on May 4 at the T-Mobile Arena in Las Vegas, Nevada.

“Daniel Jacobs is a good fighter, but Canelo is going to be too strong for him, and he might stop him,” WBA featherweight champion Leo Santa Cruz said to Fighthype. “He’s a big guy, but Canelo can take a great punch. He showed it with GGG. Triple G got him with some good shots, and he didn’t hurt him. So you can tell that Canelo can take a good punch,” Santa Cruz said.

Canelo can take a good punch, but Santa Cruz is wrong in saying that Saul wasn’t hurt in his fights with Gennady. Canelo, 28, was hurt twice in his rematch with Triple G last September. Golovkin clearly hurt Canelo in the 10th and 11th rounds with uppercuts and hooks. Canelo cannot afford to get hit like that against Jacobs on Saturday, because he’s a better finisher than Golovkin is due to his ability to throw speedy combinations. Golovkin was too slow to take advantage of the situation when he hurt Canelo in round 10 and 11.

One reason why Canelo is perceived to have a great chin is he moves really well with his upper and head, making it hard for his opponents to hit him cleanly. So what they invariably do is decrease the power on their shots just so they have a better chance of landing. Canelo’s opponents also don’t want to over-swing against him because he’s such a good counter puncher. He makes his opponents pay when they try and hit him with counter shots. That’s the reason why Floyd Mayweather Jr. focused entirely on throwing jabs in his win over Canelo in 2013.

Mayweather understood that if he threw power shots, Canelo would counter him with his left hook and short right hand. So instead of putting himself in harm’s way by throwing power shots, Mayweather used his jab to dominate Canelo. Later in the fight when Canelo was dispirited and had lost his confidence, Mayweather started to pot shot. If Jacobs is going to load up his punches, he’s got to be all or nothing.

“I think so too [Canelo has gotten better]. When the first fight [between Canelo and GGG], I thought Canelo would be better in the second fight. GGG would do the same thing, and that’s what happened,” Santa Cruz said.

Canelo had a better game plan than GGG in their rematch, but it doesn’t look like he got better necessarily. It was the same Canelo as before. It’s just that Golovkin didn’t have the right game plan. He was letting Canelo work his way to the inside, and that favored him. Golovkin should have stayed true to the Mayweather and Erislandy Lara blue print in how to beat Canelo. You don’t let Canelo walk his way to punching range. You keep him trapped on the outside where he can’t land his shots due to his lack of reach. Golovkin either didn’t have the right training or his wheels weren’t good enough. Whatever the case, Golovkin fought the wrong fight, and that cost him. You hate to blame the trainer, but the loss came on Abel Sanchez’s watch. He didn’t look like he was barking the right instructions.

“It’s going to be tough,” Sadam Ali said about the Canelo vs. Jacobs fight. “Canelo is young and strong. As you can see, he works hard. He has speed, and power. But Danny Jacobs brings tools. For me, that’s the plan [for Jacobs to box Canelo from the outside]. That’ what he needs to do. I feel he [Jacobs] needs to be perfect throughout the fight. He can’t have a mistake. Everything has to be right, and fast all the time. They can both crack, so you’ve got to see what happens,” Sadam said.

Former WBO junior middleweight champion Sadam Ali has the right idea about Jacobs boxing Canelo instead of going to war with him. If Jacobs had a better chin, it would pay off for him to go after Canelo and unload on him the way that he did in his win over Peter Quillin in 2015. If Jacobs could handle some of Canelo’s counter shots, he might be able to take him out with a flurry of punches. Canelo gets tired and his form goes to pieces when he’s forced to fight at a fast pace. Canelo’s power goes downhill like a battery losing it’s charge. Jacobs will need to be willing to risk everything for him to go after Canelo to score a knockout. It’s unlikely that Jacobs will knockout Canelo if he throws single power shots that he sees coming. Canelo can handle single shots. It’s the sustained combinations and the jabs that give Canelo a lot of problems.

WBA Super World featherweight champion Santa Cruz (36-1-1, 19 KOs) is coming off of a 12 round unanimous decision win over Rafael Rivera on February 16 in Los Angeles, California. That was Santa Cruz’s third successful defense of his WBA belt that he captured in January 2017 in his rematch with Carl Frampton. Santa Cruz lost a controversial 12 round majority decision in their first fight in July 2016 in New York.

Boxing » Canelo Alvarez » Canelo will be too strong for Jacobs, says Santa Cruz