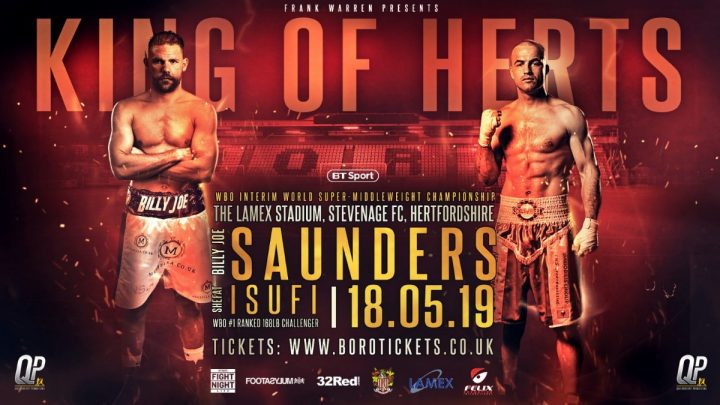 THE EARLY SUPPORTING cast for Billy Joe Saunders’ WBO Interim world super middleweight title showdown with Shefat Isufi on Saturday May 18 can now be revealed, with a number of further title contests to be confirmed shortly.

Saunders takes on the WBO No.1 ranked super middleweight Isufi at the Lamex Stadium – home of Stevenage FC – and a number of the top young players in the boxing business will be taking to the pitch bidding to score with knockout performances on the night.

After missing out on featuring on the recent Leicester show through illness, the snappy featherweight Ryan ‘The Piranha’ Garner returns to the ring for his ninth professional fight. The exciting 21-year-old from Southampton has recorded six KOs from his eight fights so far and is looking to get himself in title contention this year.

Former world amateur champion Willy Hutchinson will have his eighth pro fight in what will be his fifth fight inside a year as the Scot gathers experience in the light heavyweight division, while cruiserweight James Branch jr from Hainault enters into his fifth pro fight seeking a first KO finish.

Unbeaten super lightweight Sanjeev Sahota returns to the ring at Stevenage looking to build on his 11 wins so far, with gym-mate Harley Benn having his seventh fight at super welterweight.

In a further special attraction on the night, the multi-titled standout amateur star Lisa Whiteside is set to turn professional and will make her debut at the Lamex Stadium.

The decorated flyweight – a natural rival for Nicola Adams in the pro ranks – is a seven-time national champion and a 2018 Commonwealth Games gold medallist, who also won silver at the 2014 world championships, having won bronze at the 2012 edition. She is also a European championship silver medallist from 2011.

WHEN LISA WHITESIDE embarks on her professional voyage, with the first stop being Stevenage FC on May 18, there is one port of call – or rather person – she cannot wait to encounter.

Nicola Adams is the primary name on the radar for the 2018 Commonwealth Games gold medallist, who is also a seven-time national champion and silver medallist at the 2014 world championships, having won bronze at the 2012 edition.

But it is missing out on the chance of selection for the 2016 Rio Olympics that gnaws away at the 33-year-old flyweight from Chorley.

The veteran of over 140 amateur fights – with roughly only 15 losses – admits she has an Olympic score to settle with the Golden Girl, Adams, who denied her a place at the 2016 Games in Rio by withdrawing from a qualification contest.

“My weight is the same as Nicola Adams,” explained Whiteside on her Olympic omission.

“We should have boxed each other before the last Olympics but she pulled out. Hence why we need to have that fight in the pro game, don’t we?” suggested the professional newcomer, who was asked whether she now considers Adams as a teammate, friend or rival.

“Rival,” responded Whiteside, who intends to play catch-up on the soon-to-be world title challenger. “The main thing now is to be fast-tracked because I want that fight and so does my management team and I am sure the public, as soon as possible.

“It is a fight that never happened that should have. It would be a War of the Roses fight and would be fantastic.”

“I could have stayed on the GB team for Tokyo 2020 and I had the No.1 spot, but having the Commonwealth gold made me feel like I had done enough in the amateur game and happy to finish on a high.

“I didn’t want to miss out on the opportunity of the pro game and I felt it was the right time to go. I am not a big-headed person, but I do believe that I can become a world champion.”

Whiteside admits the prospect of turning professional was not on the horizon when she first sported the gloves, but with the popularity of the women’s game increasing all the time, she believes her entry is perfectly timed.

“It wasn’t really there when I started boxing, but after the Commonwealths I just felt like I had outgrown the amateur side and seeing how open it is now, with the publicity and liking for female boxing, I thought ‘wow, the pro game is my style’.

“My super-strength is my fitness and power, so to do it in the pro game with eight ounce gloves and no head guard is just going to suit my style.
“After the games I thought it was the right time to give this a dabble.”

BOY JONES JR is no more and being reborn as Ben Jones.

The Essex lightweight aims to unveil his new fighting style and the name change when he returns to action at Stevenage FC’s Lamex Stadium on Saturday May 18, live on BT Sport.

Baby-Faced Ben is known as a laugh a minute character who loves playing the fool, but that is consigned to the scrap heap after teaming up with new trainer, Micky Burke.

Jones (18-2-1) returns to action on the Billy Joe Saunders v Shefat Isufi bill in his first contest since his losing on points against Craig Evans in a WBO European lightweight title challenge last November.

“My trainer Mick and manager Andy Ayling sat down with me and said, ‘this ‘Boy’ look has got so stop,” he explained.

“Boxing isn’t a game you can play and you can’t be stupid in the sport. I have got to start using my brain.

“I’m a smart kid believe it or not and pretending to be dumb is like a, ‘Get out of jail free card’. People don’t really talk to you and I could get away with being stupid.

“I’m not stupid and I have learnt a lot these past few months. I am growing up and want to buy a house for my son.

“I am rebranding myself. I’m not Boy Jones Jr, I’m Ben Jones. I’m not playing the Boy card anymore.

“On social media I am known as ‘Boy,’ but I might put myself as Ben Jones (Boy).”

Jones, 22, split with trainer Dominic Negus earlier this year and is now under Burke at the Ibox gym in Bromley meaning a 70 mile round trip every day from his Essex home.

He explained: “It is never not awkward because I was with Dom for a few years, but sometimes you need a change.

“Sometimes the change is bad and sometimes it can be good. To be honest people are saying it has brought the best out of me.

“I am starting to box a bit more, using my feet and looking different in sparring. Micky has changed my style massively and I am more of a boxer.

“One reason I came to this gym is because I like the styles of boxers like Bradley Skeete and Lerrone Richards.

“This is the right move for me because of how they box – be flash and slick. I love that slick style.

“They have changed my style, but I am enjoying it.

“I have got the love back. I went through a stage of not enjoying the sport and didn’t want to do it.

“My mum and missus were telling me, ‘Come on, you can get back into it’. Mick has done really well getting me back into boxing.”

BRITISH SUPER BANTAMWEIGHT champion Brad Foster has signed a promotional agreement with Frank Warren and Queensberry Promotions and will defend his title against Commonwealth champion Ashley Lane at the Lamex Stadium, Stevenage on May 18.

Foster v Lane for the British and Commonwealth titles is added to a stacked card headlined by the WBO Interim world title clash between Billy Joe Saunders and the No.1 ranked Shefat Isufi and heavyweight contender Joe Joyce having his first fight under the Queensberry banner against Alexander Ustinov.

The Lichfield-based Foster, 10-0-1, won his British title via a convincing points victory over the experienced Josh Wale on away territory in Barnsley back in March.

In his previous fight the 21-year-old won the vacant Midlands Area super bantamweight belt following the retirement of the then unbeaten Leon Gower in round eight.

The former champion kick boxer has clocked up three stoppages from his 10 wins to date.

“Signing with Frank is a step up for me and the chance to get me out there a bit more because I am a British champion now,” reacted Foster to the career development.

“Being with Frank Warren is going to get me more exposure. I am fighting on the Billy Joe Saunders undercard and that is a dream come true for me really.

“He will take me from my British title to however far my talent will take me and my job now is to keep working hard and keep on winning, then I will carry on progressing and move up the ranks.

“Hopefully I will be at the top one day,” added Foster, who acknowledges that he has come a long way in a short space of time.

“It still hasn’t sunk in to be honest. I am just Brad from Lichfield, but if I keep on believing in myself then the sky is the limit really.

“Ashley is Commonwealth champion and I am not going to take him lightly. He will want to win the British title because everybody does and my job is just to stop him and pick up the Commonwealth on the way.

“I have looked at him to see his style but I try to focus on myself and to make sure I am the best I can be on the night. The best Brad will beat Ashley Lane.”

Bristol-based Lane, 28, is on a six-fight winning streak, a run that featured his Commonwealth title success against Michael Ramabeletsa in September 2017, who he defeated on points and reversed a previous career loss.

“I am very excited for it and it is going to be a great fight between two good kids,” said Lane, who holds a record of 13-8-2. “On paper it looks like it could go either way.

“I’ve only watched two of his fights and, to be honest, he looked good with very nice movement and a good boxing brain, but not really much power from the look of things.

“I just go into every fight looking to enjoy my time in the ring, have fun and look after myself. Winning and losing is just part of the game and is a process. I always go in there to win but, at the end of the day, having fun and enjoying it will get the right results.”