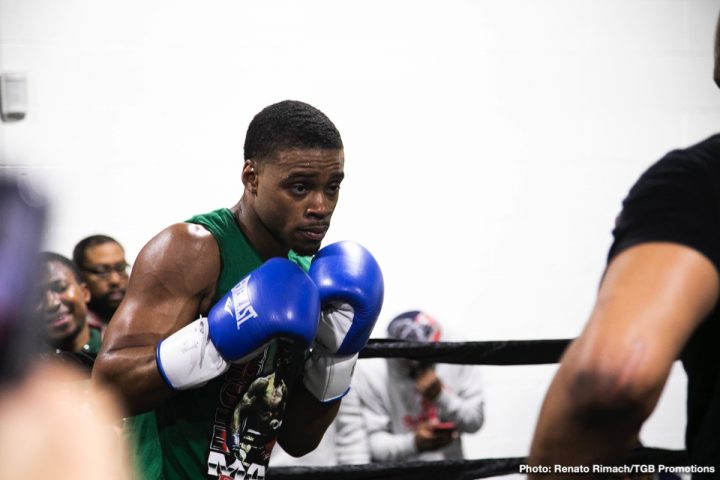 Postol won that fight by a one-sided 10 round unanimous decision over Mimoune in a WBC light welterweight title eliminator.

Crawford, 31, was surprised that his name was mentioned for some reason. Perhaps he thought the Showtime commentators wouldn’t say anything about his win over the 35-year-old Postol in the past. Postol hasn’t done much since then though other than beat a couple of obscure fighters in Mimoune and Siar Ozgul, and then lose to Josh Taylor.

Here’s how it played out:

Spence: “Where they shouldn’t of.”

Crawford: “They really know who the real man at at 147 is and you do too. Don’t let them hyping you up get you knocked off.😉”

Crawford: “Hope to see you ManDown😂😂😂 Only thing I’m running is upside his head. F— you thought this was!!!”

The way things are right now with politics that’s going on in boxing, we might not see Spence and Crawford mix it up for year or two. I’m thinking two years. Premier Boxing Champions has a lot of guys for Spence to fight, and they’re not in any rush to have him fight Crawford (35-0, 26 KOs) right now. The fight isn’t near big enough for it to be made. It doesn’t help that Top Rank is matching Crawford against over-the-hill fighters like Amir Khan on ESPN pay-per-view. If Top Rank is going to match Crawford against faded fighters from outside the U.S, they need to put on regular ESPN so that the fans can see him fight. It’s a bad idea to have Crawford fighting on PPV against shot foreign fighters.

There’s talk that the Crawford vs. Khan fight pulled in only 150,000 buys on ESPN PPV. That’s not good. Spence is saying Crawford isn’t going to get a 50-50 split with him, especially after he beats WBC champion Shawn Porter, WBA Super World belt holder Keith Thurman and WBA ‘regular’ champ Manny Pacquiao. After those three fights, Spence is going to be a name. Top Rank is going to have to be inventive if they want to keep Crawford in the same ballpark as Spence.

News:
Terence Crawford: 'Wilder didn't look good from 2nd round, no power on his shots'

Former IBF welterweight champion Kell Brook is expected to be Crawford’s next opponent, but he’s not the same fighter that he was before he was stopped by Spence and former middleweight champion Gennady Golovkin due to eye problems. Brook hasn’t fought anyone of note ever since he quit on one knee in the 11th round against Spence two years ago in 2017 in Sheffield, England. Brook has fought only twice since then against Sergey Rabchenko and Michael Zerafa. What Top Rank should be doing is throwing money at the winner of the World Boxing Super Series light welterweight tournament to get the likes of Regis Prograis to come up to 147 to challenge Crawford for his WBO title. They can throw some money at Prograis, WBO 140 lb champion Maurice Hooker, Ivan Baranchyk or Josh Taylor. Jose Carlos Ramirez, the WBC light welterweight champion, is too flawed for him to be any use. He should have lost his recent fight against Jose Zepeda. If Top Rank can’t get any of those guys to fight Crawford, they need to be inventive by moving him up to 154 to go after Jermell Charlo, Jarrett Hurd, Tony Harrison, Erislndy Lara or Jaime Munguia. Back when Paul Williams was fighting, he moved up to 154 to get fights. Crawford should do the same thing.