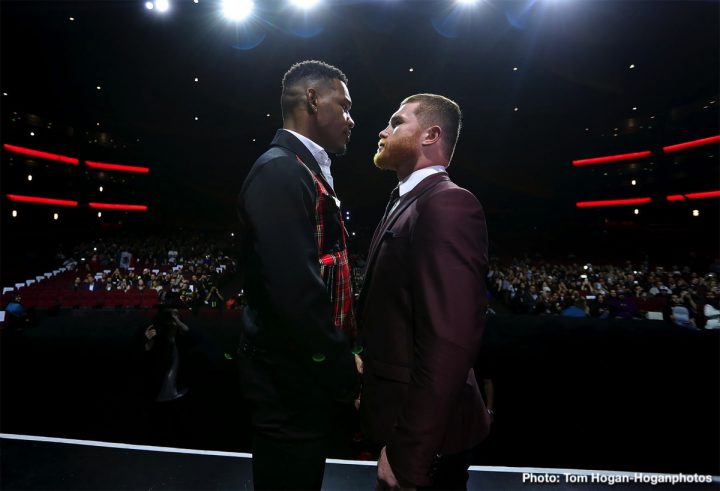 By Barry Holbrook: Daniel Jacobs says he’s not just fighting Saul Canelo Alvarez this Saturday night. He’s fighting the judges as well. The 32-year-old Jacobs (35-2, 29 KOs) believes he could be fighting four people when he steps inside the squared circle to tangle with WBA/WBC middleweight champion Canelo Alvarez (51-1-2, 35 KOs) on May 4th at the T-Mobile Arena in Las Vegas, Nevada.

IBF middleweight champion Jacobs recollects on the questionable decisions that were handed down in Canelo’s fights against former middleweight champion Gennady ‘GGG’ Golovkin, Erislandy Lara and Miguel Cotto, all of which took place in Las Vegas. Canelo escaped from those fights without taking a loss, although fans think he deserved to lose all four of those fights. They also think Canelo should have lost his match against Austin Trout, which took place in San Antonio, Texas in 2013.

The two Canelo-Golovkin matches took place at the T-Mobile Arena in Vegas. After Golovkin appeared to beat Canelo in their first fight in 2017, the judges scored it a 12 round draw. Needless to say, the boxing public was shocked at the scoring for that fight. One judge unbelievably had Canelo winning 10 rounds to 2. When it came time for the rematch to be negotiated, Canelo’s promoters at Golden Boy Promotions were able to hammer out a deal to have the second match take place at the same T-Mobile Arena in Las Vegas. Golovkin’s team said it was like “going back to the scene of a crime.” It didn’t go well for Golovkin in the rematch, as he lost to Canelo by a 12 round majority decision last September. With all those controversial fights that have taken place in Vegas, it’s got Jacobs feeling more than a little apprehensive about fighting Canelo in that city and that venue.

“There’s a part of me that believes that I’m fighting with the judges as well as Canelo and history tells you that,” Jacobs told Sky Sports. “He got what he wanted against GGG in two fights and you can also look at some of the cards he got against [Erislandy] Lara and [Miguel] Cotto too. Even against Floyd [Mayweather Jr.] one of the judges gave it a draw. That’s what I’m up against,” Jacobs said.

It’s unclear whether Jacobs had a choice or not of picking a venue outside of Nevada? If this was a ‘take it or leave it’ offer from Golden Boy Promotions for Jacobs to agree to a fight with Canelo in Las Vegas at the T-Mobile Arena, then Daniel no choice but to agree to fighting the Mexican star in that city or else he wouldn’t have gotten the fight. That would be kind of sad obviously. If a fighter is using his A-side muscle to force his opponents to be put at a disadvantage of fighting in a venue and/or city where they’re perceived to have little chance of winning aside from scoring a knockout, it puts them at a distinct disadvantage. Instead of them having different ways of winning, they’re put in a position where they have to fight more aggressively than they normally would in order to try and knock Canelo out.

“I just intend to do a dominant job and trust my own ability in the fight and if I do that and put the fight in my favor without any doubt whatsoever then I don’t think there can be any issues from the judges,” Jacobs said. “It shouldn’t have to be that way, but that’s where I’m at right now. If I’m at my best, then there’s no way they can take it from me.”

The only thing Jacobs can do is to try and “dominate” Canelo to the point where the judges aren’t a factor in the fight. With the tremendous amount of attention that is put on this fight, it’s going to look bad if Jacobs winds up losing a controversial decision or be in a situation Golovkin was in where he was given a draw in a fight that many felt that he won against Canelo. Jacobs has to fight as hard as possible, because he’s facing history in going into the same venue and dealing with the same judges that worked the second Canelo vs. Golovkin fight at the T-Mobile Arena. Jacobs’ promoter Eddie Hearn elected not to challenge the judges picked out for the fight by the Nevada State Athletic Commission. Those are judges are as follows: Dave Moretti, Glenn Feldman and Steve Weisfeld. These are three that worked the Canelo-GGG 2 fight, and they gave Canelo the victory by a 12 round majority decision last September.

Since Hearn didn’t try and get the three judges thrown out, Jacobs will have to take his chances that he won’t end up like Golovkin in losing a questionable decision to Alvarez. It would be bad if Canelo is involved another controversial decision in Las Vegas, but it could happen. It would be different if it went the other way with Jacobs winning a controversial decision. Can that happen? Yes, but history tells us that it likely won’t, because Canelo has never had the judges score against him in giving him a controversial loss during his career, even though many boxing fans believe that he should have at least six losses on his record to GGG, Austin Trout, Floyd Mayweather Jr., Miguel Cotto and Erislandy Lara. Will Canelo’s luck with the judges run out on Saturday or will be a continuation of the status quo?

Canelo looks like he’s in the process of dropping water weight to make the 160 pound weigh-in limit for this Friday’s weigh-in. It’s going to be doubly hard for both fighters that they’ll have to weigh-in on the morning of the fight for the IBF’s secondary weigh-in, which limits the amount of weight they can rehydrate to just 10 lbs at 170 lbs. The two weigh-ins make the fight tricky for both fighters. Getting the weight right without being weakened for the fight is going to be a competition as well. With all things being equal in terms of the judging for the fight, whichever fighter is able to make the two weight checks without being weakened on the night of the fight will have an advantage.

The Canelo vs. Jacobs fight will be streamed on DAZN on Saturday night.