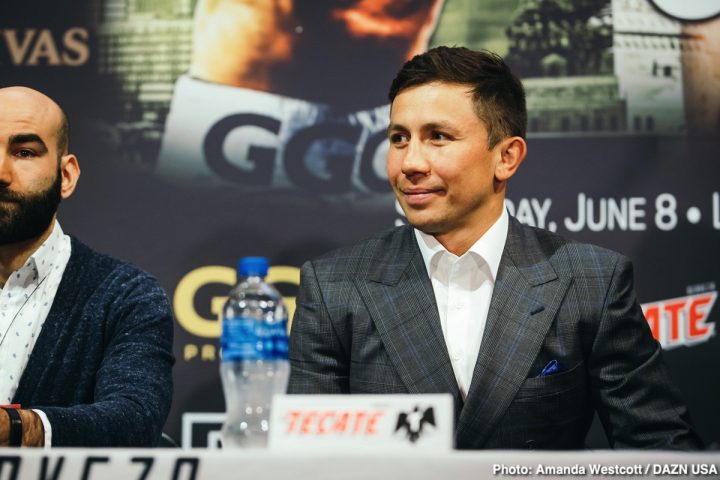 By Chris Williams: Jeff Mayweather says he saw the split between trainer Abel Sanchez and Gennady Golovkin coming after the GGG’s recent loss to Saul Canelo Alvarez last September. Sanchez told media after the fight that GGG didn’t do some of the things he wanted him to, and how took rounds off. Jeff says the split between Sanchez and GGG wasn’t about money. It was about Sanchez speaking his opinions about the Canelo vs. GGG 2 fight, and that was something that Golovkin couldn’t deal with.

Golovkin announced on his social media this past week that he splitting with Sanchez, and going in a different direction towards finding another trainer. It was surprised a lot of fans that GGG did this, but not Jeff Mayweather. He saw the move coming when Sanchez started talking about how great Canelo looked after his questionable win over GGG. Did Golovkin see that as an act of betrayal on Sanchez’s part? Jeff says if he was in the same position Sanchez was in, he probably wouldn’t tell the media that he though his fighter should have lost.

Canelo won a close 12 round majority decision that could have gone Golovkin’s way, but it looked odd to some people the way Sanchez was giving Canelo so much credit afterwards instead of complaining about the decision the way a lot of boxing fans were.

“A lot of fighters get to the point where they blame the trainer [after they lose]. It don’t matter how long you’ve been with them,” Jeff Mayweather said on the Mayweather Boxing Channel. “To me, I saw it coming. It had nothing to do with money,” Mayweather said about Golovkin’s split with trainer Abel Sanchez. “I don’t think it was about money. What I think it was about was Abel Sanchez speaking truthfully about what was too much for Golovkin accept, and that’s what I truthfully believe,” Mayweather said about Sanchez speaking to the media shortly after GGG’s controversial loss to Canelo

Here’s some of the stuff that Sanchez said about the Canelo vs. Golovkin II fight the day after the fight:

”I told Golovkin in the 11th and 12th, I needed him to win both rounds,” Sanchez said to Fighthub. ”I thought it was a close fight. I told him I needed both rounds, and I think he took off the last round. He didn’t do enough to win it convincingly. Absolutely,” Sanchez said when asked if it was a fair decision. “Anything less than that would be taking away from the great victory by Canelo.”

The way that Sanchez was talking, it came across like he was blaming Golovkin instead of accepting some blame himself for his defeat. It looked strange the way Sanchez was giving Canelo so much praise. This was just small example of the praise that Sanchez lavishing on Canelo. Golovkin was kind of left out by Sanchez when it came to being praised after the fight. It looked like Sanchez and Golovkin weren’t on the page after the fight. While Golovkin thought he should have been given the win, Sanchez was pouring compliments over the head of Canelo, and telling the media that Golovkin was taking rounds off, and didn’t win the 11th and 12th like he wanted him to. Sanchez thinks Golovkin took the 12th round off. It didn’t look like he did. It looked like Golovkin fought hard in the 12th in a round that could have gone either way.

“When Abel said he thought GGG could have lost, because of the fact that he thought Canelo pressed the fight and took away what he did in the first fight, and he felt that Canelo had won the fight,” Jeff said. “I’m like this; I’m real. I’m not going to lie to you,” Jeff Mayweather said in putting himself in Abel’s shoes in talking about being honest when asked questions about fighters. “I’m not going to tell you that you won if you didn’t. Would I tell the media that? It all depends. In a fight that was close, maybe I wouldn’t say anything to he media, because that’s a fight that could have gone one way or another. But if it’s a fight where my guy lost, I have no problem saying he lost. When I say he lost, that means he lost,” Jeff said.

If Jeff Mayweather can’t see how Golovkin or any fighter would be bothered if their trainer was admitting defeat in a close fight, then it’s disappointing. If a fighter has poured his heart out and he genuinely felt he should have won, he’s not going to want to hear his trainer telling the media that he didn’t do enough to win, he took rounds off, and other guy deserved the win. In hindsight, Sanchez might have done better to hold his thoughts, because it looked like he was admitting defeat, which wasn’t what Golovkin felt. He thought he did enough to get the win. You can only imagine what Golovkin was thinking when he was heating Sanchez talk about how good of a job Canelo did, and how the judges did a fine job scoring the fight.

”I wasn’t surprised,” Sanchez said about Canelo fighting aggressively in coming forward the entire fight. “I told Golovkin that [Canelo would fight aggressively]…Golovkin didn’t do some of the things that we had worked on in the gym tonight. 100 percent,” Sanchez said when asked if Canelo has improved from the fighter he was a year ago. “This is the Canelo we saw in 40 previous fights except the Golovkin first fight. Canelo fought in Mexican style and won in Mexican style. If Canelo is a superstar, then you beat a superstar if you win the last round. We’re disappointed that we didn’t get the victory, but we had three good judges,” Sanchez said about the Canelo vs. GGG 2 fight. “I think Canelo deserves all the credit for taking the victory. There were moments that he took off that I wasn’t particularly happy,” Sanchez said about Golovkin. “I was imploring him to attack more.”

Looking at some of things Sanchez said after the fight, it came across like he was blaming Golovkin for the defeat.