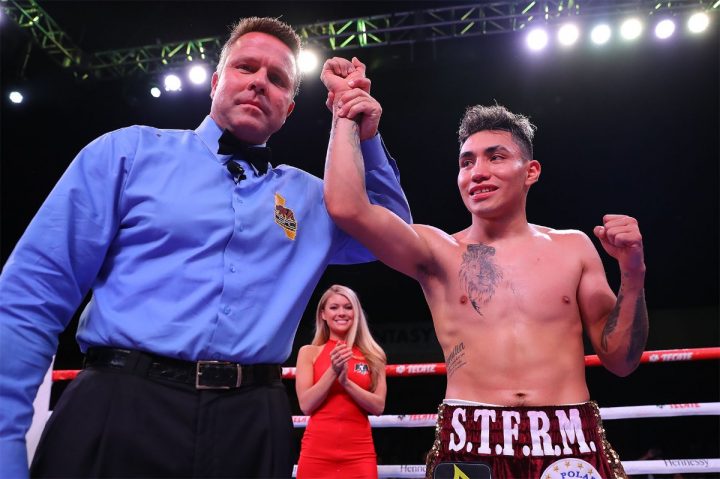 By Sean Jones: Eduardo “Rocky” Hernandez (28-0, 24 KOs) says he’d be willing to fight the highly popular lightweight contender Ryan “Kingry” Garcia (18-0, 15 KOs) if the fight were offered to him. Hernandez, 21, and Ryan Garcia are both promoted by Golden Boy Promotions, so it’s an easy match to be made.

Hernandez might be a little too advanced for a raw fighter like Ryan Garcia. Hernandez looks he can do everything inside the ring – punch, box, fight on the outside, and move. In contrast, Garcia is still learning how to fight with his new trainer Eddy Reynoso. It’s unlikely that Golden Boy would want to risk having Garcia fight Rocky Hernandez right now. But the thing is, Garcia is going to have to be able to deal with guys like this if he wants to become a world champion. There aren’t any easy marks for Garcia to win an easy world title against in the lightweight division. All the champions are solid, and the top contenders are also quite talented as well.

Garcia, 20, moved up to lightweight last September, and he’s quickly put together three fast wins in beating Jose Lopez (20-4-1, 14 KOs), Carlos Morales and Braulio Rodriguez. Oscar De La Hoya of Golden Boy Promotions says and he wants to put Garcia in with a world champion, but it remains to be seen whether he’ll make that move yet. There’s talk that Golden Boy is targeting IBF super featherweight champion Tevin Farmer for Garcia to go after. However, at 5’10”, Garcia might be too tall to continue to make weight for the super featherweight division without draining himself. That’s tall even for a welterweight, and Garcia might be too thin at that weight to take on the shorter, stockier fighters like Farmer, Gervonta “Tank” Davis, Rocky Hernandez and Miguel Berchelt. Even at lightweight, Garcia looks painfully thin inside the ring.

Hernandez destroyed Ibrahim Class (22-6, 10 KOs) by a second round knockout last Saturday night on the Ryan Garcia vs. Jose Lopez card on DAZN at the Fantasy Springs Casino, in Indio, California. Hernandez, #2 WBC, knocked Class down twice in the second round. The fight was sthen stopped at 1:58 of round 2.

“I believe he’s moved up in weight to 135 pounds, and right now we’re at a point where we don’t feel like we need to move up to 135,” Rocky Hernandez said to Villainfy Media. “We make weight easy, but if the fight were ever offered, we would accept it, no problem,” Hernandez said.

Hernandez looked better beating Class than “Kingry” Garcia did in beating Lopez. However, talent might not be the reason why Golden Boy is giving Ryan such a big punch. You can argue it’s more based on his popularity, looks, charisma and his large social media following than it is with his potential. Hernandez looks to be the better prospect, as does unbeaten light welterweight Vergil Ortiz (12-0, 12 KOs), but they’re not as popular as Ryan Garcia.

Hernandez is an amazing talent, and who likes to get in there and slug away on the inside. The guy looks very hard to beat at this point. Whether Hernandez will be able to handle WBC super featherweight champion Miguel Berchelt is the big question. That’s a tough fight for Hernandez to be taking at this early stage of his career.

“I showed my ability in there,” said Rocky Hernandez. “This year I plan to show everyone the Mexican style we all love. I also want the world to know who Rocky Hernandez is. Hopefully I can get a world title shot by the end of the year.”

NEWS:   Efe Ajagba – A force to be reckoned with in the heavyweight division?