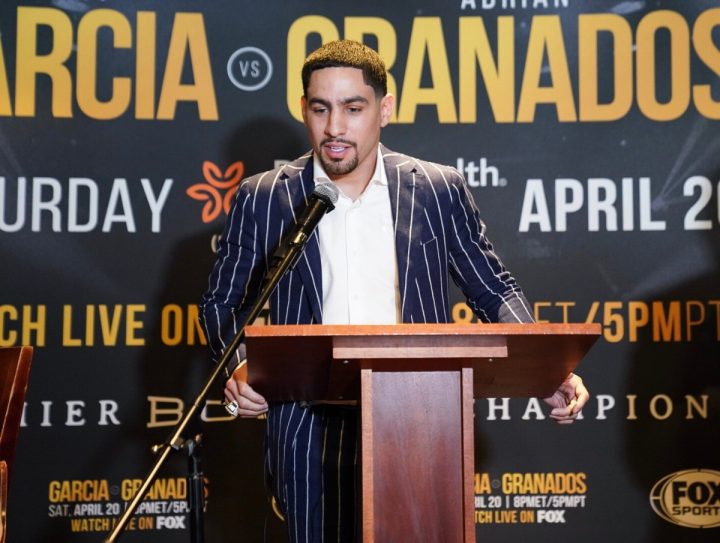 By Mark Eisner: Danny Garcia (34-2, 20 KOs) says it’s going to be the “Danny Garcia” show when he faces Adrian Granados (20-6-2, 14 KOs) in two and half weeks from now on April 20, and he wants to beat the 29-year-old in style when the two square off for the vacant World Boxing Council Silver Welterweight title on PBC on FOX and FOX Deportes at the Dignity Health Sports Park in Carson, California.

Garcia, 31, needs a solid win here to continue to be seen as one of the best fighters in the welterweight division. He’s lost two out of his last three fights, and he’s now viewed as a guy that’s a step below the elite in the weight class. What Garcia doesn’t need is for him to slip into the same category as Adrien Broner is in right now in being used as a B-side opponent for the champions Errol Spence Jr., Keith Thurman, Manny Pacquiao and Shawn Porter to fight to beat.

There’s not a huge amount of interest from the fans in seeing Garcia fight Granados, as many of them view this as another cherry pick on his part. The fans at this point want to see Garcia fight the best, and not look continually to fight lesser guys. Granados is a solid fighter, but he’s someone that has come up short when he’s faced the best in the past. You can say the same thing about Danny, but he’s least won two world titles at light welterweight and welterweight.

It’s been a while since Danny won a fight in style. He beat past his best Brandon “Bam Bam” Rios by a ninth round knockout last year in February, but even that fight wasn’t an impressive one for Garcia. He stopped Rios in dramatic fashion in the ninth round, but it wasn’t an easy fight for him. Rios was landing a lot of shots on Garcia, and had his face marked up badly at the end of the contest. That was not the type of fight that instilled confidence in Garcia that he could get the job done against the better fighters at 147 like Pacquiao, Thurman, Spence, Porter and Terence Crawford. Garcia followed that fight with a 12 round unanimous decision defeat against Porter last September. Thurman beat Garcia in 2017. The fights were all competitive for Garcia, but he just lacked the ability to win.

If Garcia loses or struggles against Granados, he’s going to need to think about moving back down to 140. Garcia probably move back down to 140, however, as there’s a lot of talented fighters in the division now like Regis Prograis, Jose Ramirez, Josh Taylor, Maurice Hooker, Kiryl Relikh and Ivan Baranchyk. It’s possible that Garcia won’t be able to beat those guys because they can punch, they’re skilled, and they’re younger than him. More importantly, the money isn’t going to be as good for Garcia at light welterweight than if he remains at 147, and hangs around looking to get fights against the top dogs in the division.

“I always gave him kudos for what he’s done in his whole career, but he doesn’t know what I’ve gotten through to get here,” Granados said about Danny Garcia. Being able to take out a fighter like Danny is motivating me to another level.”

Granados has suffered a couple of losses in the last two years to Broner and Shawn Porter, but those were close affairs. Granados clearly lost the fight to Porter by a 12 round unanimous decision by the scores 117-111, 117-111 and 117-111 in November 2017, but it was a fight in which Granados forced Shawn to box him rather than slug. Granados was more than a match for Porter on the inside, and he made him change his game plan to avoid taking punishment. Granados’ 10 round split decision defeat to Broner on February 18, 2017, was one that controversial, and looked to be a hometown decision victory for “The Problem.” The fight took place in Broner’s hometown of Cincinnati, Ohio. That should have been a win Granados in the eyes of a lot of boxing fans. Originally the fight was supposed to have a 12 rounder, which would have favored Granados, but the fight was changed to a 10 rounder the weak of the fight.

The plan of attack by Granados is likely going to see him try and make it an inside war like he did in his fights against Broner, Porter and Javier Fortuna. Danny Garcia struggled with the inside fighting done by Porter last September. Porter was able to rough up Garcia, and land a lot of nice shots. Garcia was landing some big punches as well, but he wasn’t able to get leverage on his shots with Porter smothering his offense, and keeping him pinned to the ropes. Granados, 5’9″, doesn’t blow up after he rehydrates for his fights the way Porter does, and he’s not as physical as far as bumping and bashing heads with his opponents. Granados won’t try and keep Garcia against the ropes the way Porter did, but he’s going to stay inside as much as possible in this fight. Inside fighting is Garcia’s weakness. Granados will need to be on the look out for low blows, as Garcia tends to throw a lot of shots that stray low. Who can forget Garcia’s fight against Lucas Matthysse in September 2013. That was a low blow clinic that Garcia put on in winning a 12 round unanimous decision. When Matthysse was on the outside, he was getting hit with a lot of hard jabs from Garcia. But when Matthysse would come in close to try and land his power shots, Garcia would hit him with debilitating low blows that seemed to take the fight out of him. The referee Tony Weeks finally took a point away from Garcia in the 12th round, but by then it was already too late in the fight to have an effect on the outcome.