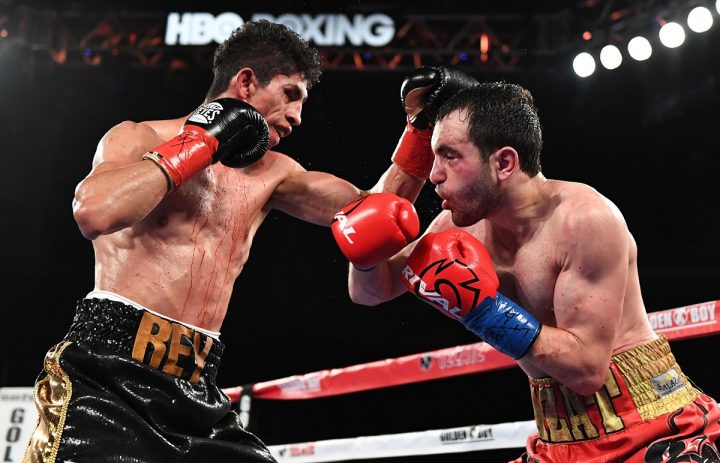 By Mike Smith: Rey Vargas (33-0, 22 KOs) and former WBO super bantamweight champion have agreed to terms for a fight. The two were heading towards a purse bid, but it was averted when their management were able to agree to the terms of the fight.

Vargas, 28, will be defending his WBC super bantamweight title against interim World Boxing Council 122 lb champion Kameda (26-2, 22 KOs) at a still to be determined venue and date.

The management for the two fighters, Golden Boy Promotions, Promociones del Pueblo and TGB Promotions were able to put a deal together.

This should be a good fight. Vargas throws a lot of punches, and has respectable power. It’s unclear how Vargas would stack up against the other top super bantamweights in the division like Daniel Roman, TJ Doheny, Isaac Dogboe, Emanuel Navarrete, Jessie Magdaleno and Guilermo Rigondeaux. Those would be tough fights for Vargas, but winnable ones if he’s able to use his boxing skills.

This is a hard fight for Vargas to take after his grueling 12 round unanimous decision victory over knockout artist Franklin Manzanilla (18-5, 17 KOs) on February 9 at the Fantasy Springs Casino, in Indio, California. Vargas was knocked down hard from a left hook by Manzanilla in the second round. The shot put Vargas flat on his back. However, Vargas was able to use his height and reach to outbox the hard hitting Colombian Manzanilla the rest of the way, but it was far from an easy fight.

Vargas captured the WBC super bantamweight title on February 25, 2017 in beating Gavin McDonnell by a 12 round majority decision. Since then, Vargas has successfully defended his strap four times in beating Manzanilla, Azat Hovhannisyan, Oscar Negrete and Ronny Rios, all by 12 round decisions.