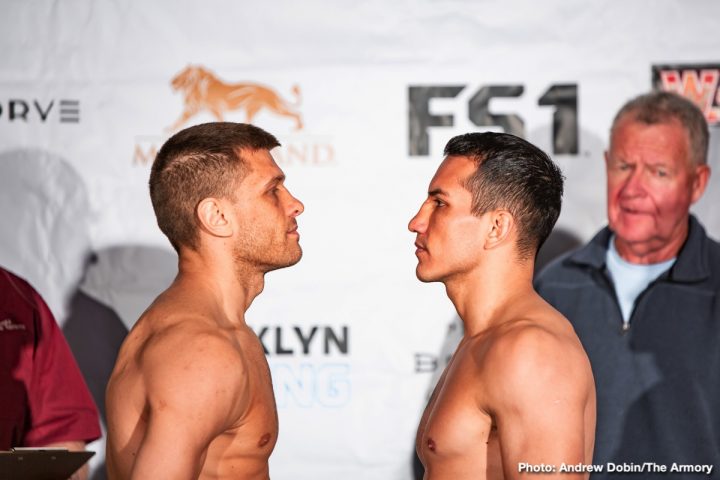 By Sean Jones: Peter Quillin will be fighting Caleb Truax in an IBF super middleweight title eliminator in the headliner bout, and Sergiy Derevyanchenko is taking on Jack Culcay in an IBF middleweight title eliminator in the chief support on the card tonight on Premier Boxing Champions on FS1 and Fox Deportes at the Armory in Minneapolis, Minnesota. The televised portion of tonight’s card kicks off at 10:00 p.m. ET/7:00 p.m. PT.

The 35-year-old Quillin (34-1, 23 KOs) has a lot to prove tonight when he fights former IBF super middleweight champion Truax (30-4-2, 19 KOs). Quillin is being given the chance that clearly doesn’t rate to fight in the International boxing Federation 168 lb title eliminator against a fighter that only recently lost his IBF strap under controversial circumstances last year against James DeGale in April of 2018.

With only two fights in the last four years, Quillin looks out of place to be fighting in a title eliminator. However, boxing is a lot like acting. When an actor proves himself by being in a popular movie, they keep getting chances in movies in the future due to them being recognizable to movie goers. Qullin established himself as a world champion when he held the WBO middleweight title from 2012 to 2014. Although Quillin hasn’t done anything in the last five years with his career, he’s still being given a chance by the IBF to fight in their title eliminator against recent champion Truax.

“When I sparred Caleb I remember I knocked his headgear off and it flew across the ring, that’s the only thing I really remember from that,” Quillin said about his past sparring session with Truax. “I was really happy for him when he won his title. I have a feeling we’re going to combine for a great fight.”

The sparring session likely took place many years ago before Truax defeated DeGale in 2017, and made a name for himself in the process. Quillin’s once promising career was knocked off kilter with his first round knockout loss to Daniel Jacobs in December 2015. But Quillin had already derailed his career by making the bungling decision to vacate his WBO middleweight title in September 2014, and then take a year off. This was in response to the WBO ordering Quillin to defend against mandatory challenger Matt Korobov, who at the time was with Top Rank. 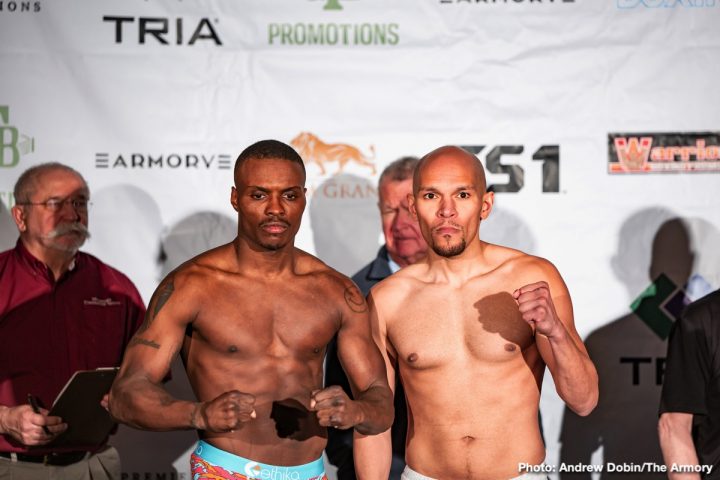 Quillin is managed by Al Haymon. Taking a year off in boxing is never a good idea. For most fighters, when they take that much time off, they develop ring rust, and they need to be slowly brought back. Quillin was no exception. But in his career, his management didn’t bring him back slowly. They stuck Quillin in with Andy Lee after he came back from a year layoff, and he was very lucky to earn a 12 round draw after getting knocked down in the seventh round by the hard hitting southpaw Lee.

Quillin totally caved in from the sixth round on against Lee. Quillin was gassed, and he fell apart from the pressure that Lee was putting him under. After that, Quillin defeated Michael Zerafa in a fifth round wipe-out, but then was stopped in the first round by Jacobs in 2015. Things haven’t been the same for Quillin ever since. He’s had only two fights since the loss to Jacobs. Only Quillin knows why he’s not kept himself busy. What’s clear is he’s not likely to regain the form that he had back in 2014 when he vacated his WBO title after beating Lukas Konecny by a 12 round unanimous derision. Some fans think Quillin was a flawed fighter to begin with, but his flaws were masked because he was matched against a lot of beatable opposition and old guys.

2008 Olympian Derevyanchenko (12-1, 10 KOs) will be fighting a well schooled fighter in Culcay (25-3, 13 KOs) tonight in their IBF 160 lb title eliminator match. The winner of the fight has a chance to put themselves into the equation for a fight against one of these three big names at middleweight: Saul Canelo Alvarez, Daniel Jacobs or Gennady Golovkin. Jacobs holds the IBF middleweight title right now. He’s fighting Canelo on May 4.

The winner of the fight will hold the IBF belt, and that means they’ll have to face the Derevyanchenko-Culcay winner at some point when the sanctioning body gets around to ordering the fight. Derevyanchenko was the IBF mandatory before, and he had no luck in getting Golovkin to fight him. GGG vacated his IBF title rather than fight Derevyanchenko. Of course, Golovkin didn’t vacate his IBF title out of fear of facing the 5’9″ Derevyanchenko. It was more about timing of the fight. The IBF selected the worst possible time to order Golovkin to face Derevyanchenko. Golovkin was in negotiations with Canelo Alvarez for a rematch last September. Had Golovkin taken the fight with Derevyanchenko, he would have had to face him no later than August, which would have left only one month in between that fight and the rematch with Canelo. Golovkin wasn’t going to turn his back on the bigger payday against Canelo, so he let his IBF strap go.

“Everyone knows I always bring action and great technical skill,” Derevyanchenko said. “I am confident that I will be victorious on Saturday and go on to win a world championship.”

The good news is the winner of Derevyanchenko vs. Culcay fight will definitely get a title shot at the IBF belt. The bad news is it may not be against Canelo, Jacobs or GGG. If those fighters decide they don’t want to take on a guy that is more trouble than he’s worth like Derevyanchenko, they may vacate the IBF belt, and focus on fighting each other in fights that will gain a lot of attention in the boxing world.

The Derevyanchenko-Culcay contest comes down to these areas:

Power: Derevyanchenko has the heavier hands, and the better jab of the two. Culcay has decent power, but his 46% knockout percentage shows clearly that he’s not a puncher like Derevyanchenko with his 77% KO percentage

Speed: Culcay is the faster guy of the two, both in hand and foot speed

Experience: As a pro, you have to give this area to Derevyanchenko by the fact that he’s fought against Daniel Jacobs and Tureano Johnson and done well against them. Culcay’s best opponents are Demetrius Andrade and Maciej Sulecki, and he lost to both of them. Culcay obviously didn’t do well against either guy

Punch resistance: Derevyanchenko takes this area. He’s never been hurt before in a fight. Although Derevyanchenko was knocked down in the first round in his fight against Jacobs last October, it was a flash knockdown by a shot that hit him when he was off balance. It wasn’t a case of him being hurt.

Mobility: Culcay is the better mover of the two. Derevyanchenko doesn’t move well, but he’s excellent at cutting off the ring.

“I’ve been sparring with Caleb Truax, and I feel it’s gotten me completely ready for this challenge,” Culcay said. ” going to show it in the ring on Saturday night. It’s going to be a lot of action and a lot of skill in the ring.”

Sparring with Truax gives Culcay some valuable experience. Truax and Derevyanchenko are similar fighters with the way they punch around the ring. If Culcay was able to hold his own against Truax, then it’s possible that he might do well tonight against Derevyanchenko. It’s still going to be difficult for Culcay, as Derevyanchenko is a pressure fighter with a lot of talent, and punching power. This could be a fight that comes down to whether Culcay can stay away from Derevyanchenko in the early part of the contest when he’s most dangerous. It’s not going to be easy though, considering how good Derevyanchenko is at cutting off the ring on his opponents to force them to fight.