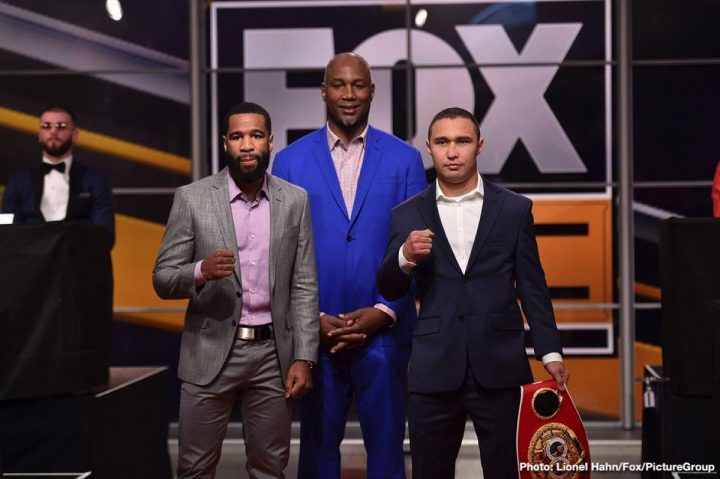 These two interesting fights are part of Fox Sports and Premier Boxing Champions eight-fight announced of televised fights in the first quarter of 2019.

This is an important fight for the 34-year-old Peterson, as he’s coming off of a 7th round stoppage loss to IBF welterweight champion Errol Spence Jr. earlier this year on January 20 at the Barclays Center in Brooklyn, New York. Peterson wan’t competitive at all in the fight. Peterson was knocked down in the 5th and battered by Spence until his corner pulled him out of the fight. Spence looked like he was in 1st gear every round except for the 5th. Peterson has got to show against Lipinets that he’s capable of fighting at a high level. It’s a good thing that Peterson is dropping back down to 140, seeing that he lacks power at 147. Peterson is getting up there in age at 34. A win for Peterson over Lipinets will show that he’s still a factor in the 140 lb division.

Lipinets was beaten by Mikey Garcia earlier this year in losing his IBF light welterweight title by a 12 round unanimous decision. Lipinets came back from that loss to defeat Erick Bone by a 10 round majority decision last August.

35-year-old Truax (30-4-2, 19 KOs) has a tough fight on his hands against Quillin (34-1-1, 23 KOs) on April 13 on FS1 from The Armory, Minneapolis. The fight card starts at 10pm ET/7 pm PT. Quillin is also 35, and he’s trying to rejuvenate his career at super middleweight after being knocked out in the 1st round by Daniel Jacobs in December 2015 in a fight at middleweight. After two years out of the ring, Quillin moved up in weight to 168 in 2017, and he’s since won his two fights against Dashon Johnson and J’Leon Love. Quillin looked good in both fights, but he wasn’t facing facing super talented fighters though.

Truax lost his IBF super middleweight title in a rematch with James DeGale by a controversial 12 round unanimous decision last April in Las Vegas, Nevada. A lot of boxing fans thought Truax did enough to deserve the victory. All DeGale did was clinch and run for 12 rounds. The scoring for the fight looked off. Since that fight, Truax bounced back to defeat journeyman Fabiano Pena by a 3rd round knockout last August. Truax has the power to beat Quillin, but he might not have the hand speed. There’s no question that Truax has the punching power to knockout Quillin if he can land his shots. Jacobs destroyed Quillin in one round three years ago. Traux hits as hard as Jacobs. He might not have the hand speed, but he has more than enough.

A loss for either of these guys will be hard for them to take. Since both are 35, they can’t absorb losses and come back from them in the same way that a younger guy would. The best thing Truax and Quillin have going for them is they’re former world champions and are well known with the hardcore boxing fans.