Oscar Valdez vs. Erick Ituarte on June 8 on ESPN 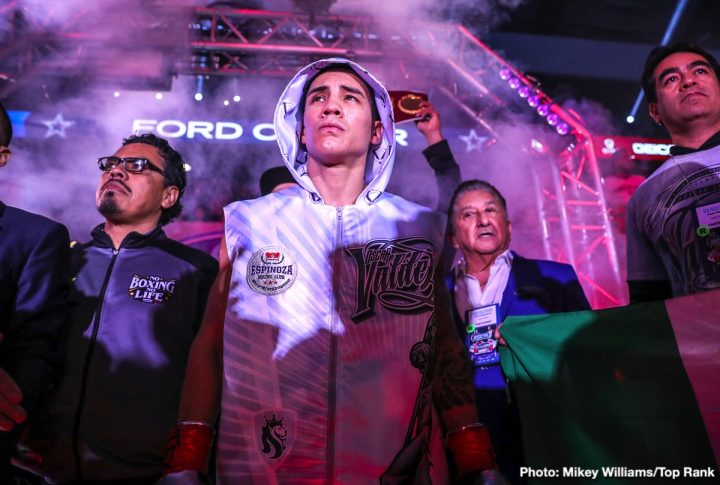 By Dan Ambrose: WBO featherweight champion Oscar Valdez will be defending his title for the sixth time against Erick Ituarte (21-1-1, 3 KOs) in a voluntary defense on June 8 on Top Rank Boxing on ESPN in Reno, Nevada, according to Dan Rafael. The fight still isn’t official yet, but it’s being finalized.

Valdez is capable of beating much better opposition than Ituarte. It’s unclear why Top Rank is matching him so weakly since he suffered a broken jaw 13 months ago in his fight against Scott Quigg.

It’s unusual pick by Top Rank to select the 24-year-old Ituarte for Valdez to fight, because he’s not ranked in the top 15 by any of the four sanctioning bodies, and he’s never beaten a world ranked contender before during his eight-year pro career. Ituarte has won his last 14 fights against low level opposition since his six round unanimous decision loss to Cesar Alan Valenzeula (14-6-1, 5 KOs) in June 2014. Ituarte also has a four round draw on his record against Humberto Zatarain (3-4-2). Ituarte fights for Thompson Boxing, and it appears that he’s gotten noticed by Top Rank enough for them to want to have the 28-year-old Valdez defend his World Boxing Organization 126 lb title against him on June 8 in Reno. There are a lot of top level contenders that would be more interesting options for Valdez to fight in the WBO’s rankings.

Valdez returned to the ring on February 2 to defeat Italy’s Carmine Tommasone (19-1, 5 KOs) by a seventh round knockout on the undercard of Sergey Kovalev vs. Eleider Alvarez light heavyweight card on ESPN in Frisco, Texas. Valdez had been out of the ring for 11 months after suffering a bad broken jaw to the hard hitting former WBA super bantamweight champion Scott Quigg in March 2018.

Ituarte recently returned to the ring after an 11 month layoff himself to defeat journeyman Jose Estralla (20-16-1, 14 KOs) by a 10 round unanimous decision on April 19 at the DoubleTree Hotel, in Ontario, California. Ituarte had been out of the ring due to a back injury. It’s difficult to pick out who Ituarte’s best opponent of his career, because he’s faced largely nobodies for his entire eight-pro career. Ituarte came close to losing to Alberto Torres (11-2-3, 4 KOs) in squeaking by with an eight round split decision in August 2017.

Since that fight, Ituarte’s promoters at Thompson Boxing have backed him off by putting him in even weaker opposition than that in matching him against Gustavo Molina (24-20, 9 KOs), Carlos Carlson (23-5, 14 KOs) and Jose Estrella (20-16-1, 14 KOs). The records for those fighters are woeful to the extreme. Top Rank sees something in Ituarte that makes them think he’s a good opponent to challenger Oscar Valdez for his WBO title, but this has mismatch written all over it. Given that Valdez vs. Ituarte would potentially be a main even fight on ESPN, you have to wonder about the logic of this kind of a match-up for such a high visibility fight.

Valdez’s promoters at Top Rank aren’t going out of there way to match him against quality fighters since he suffered a broken jaw against Quigg. It’s unclear if Valdez is still having physical problems that would require him to fight soft opposition.