Abel Sanchez talks GGG: “To be Blindsided like this is heart-breaking” 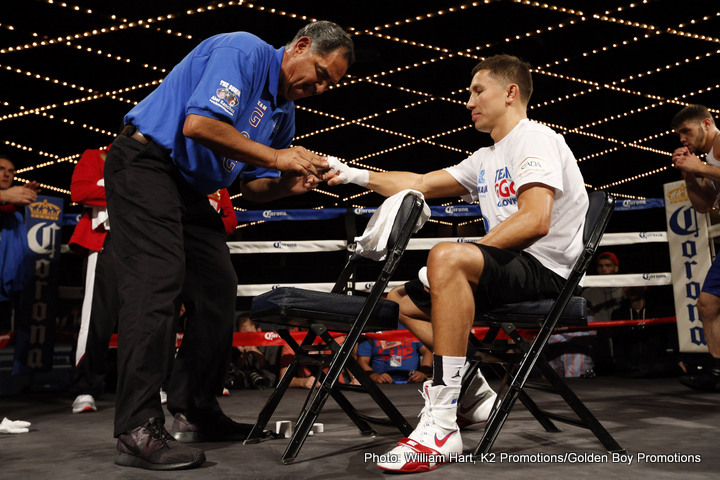 By Mark Eisner: Fired trainer Abel Sanchez continues to air dirty laundry about him being terminated by former IBF/WBA/WBC middleweight champion Gennady “GGG” Golovkin a day after he let him go, and it’s abundantly clear that he’s not going to go away without spilling his guts first.

In a questionable move, Golovkin let his boxing fans know about his decision to terminate Sanchez by posting the news on Instagram to his 3.5 million followers. In hindsight, it might have been better for GGG to keep it on the down low, and let boxing fans and the media discover it on their own when they fail to see Sanchez in his corner on the night of his next fight against Steve Rolls (19-0, 10 KOs) on June 8 on DAZN at Madison Square Garden in New York.

With yesterday’s shocking news that former middleweight champion Gennady Golovkin parted ways with longtime trainer Abel Sanchez, it quickly became apparent that Sanchez was not taking it so well. The experienced trainer would first release a statement calling Golovkin greedy and ungrateful before going on to expand upon his disappointment in Golovkin.

Here’s what Sanchez said to RingTV.com about his firing by Golovkin:

“You just never think (a split over money was possible), knowing him for nine years, that he’s had a great upbringing, he’s had a very honorable existence with me for the last nine years, everything has been on a handshake basis, on a truthful basis. To be blindsided like this, it’s heartbreaking. It’s difficult now to go forward and think that nobody else will do the same thing, unfortunately.”

Sanchez believes that one possible reason why Gennady is swapping him out for another trainer is because of his inner circle getting him to make an offer that he felt was “insulting” to continue working with him.

Despite being let go by Golovkin, Sanchez does feel he’s got enough left to finish out his three-year contract with DAZN. Sanchez believes the 37-year-old Golovkin has six more fights left in him as a top level fighter.

With Golovkin having had problems in his recent fights against Saul Canelo Alvarez and Daniel Jacobs, it makes sense for him wanting to look in another direction as far as trainers. At 37, Golovkin has to have learned all he can from Sanchez and won’t improve too much if at all if he stays with him. When a teacher no longer has anything new to teach to his pupil, it’s time to move on to the next grade. Golovkin arguably should have moved to a different trainer many years ago once he learned all he could from Sanchez. Unless he was teaching GGG new things each camp, it was redundant after awhile.

Golovkin didn’t say who he plans on using as a replacement for Sanchez. Golovkin needs someone that can teach him how to nullify what Canelo Alvarez and Daniel Jacobs will be bringing to the table when he eventually faces them again.

Here’s the statement Golovkin put out on Instagram to his 3.5 million followers on Wednesday:

“I would like to announce that I have made a major decision for myself and for my career. I want to build on what I have already achieved and continue to better myself. Therefore, I will not be training with Abel Sanchez. This was not an easy decision for me and it is not a reflection on Abel’s professional abilities. He is a great trainer, a loyal trainer, and a Hall of Fame trainer. I will be announcing my new trainer at a later date. But today, I want to thank Abel for the lessons he taught me in boxing.”

With GGG having signed a six-fight contract with DAZN, it’s possible that he’ll fight both Canelo and Jacobs once again.

Oscar Valdez vs. Erick Ituarte on June 8 on ESPN »