Manny Pacquiao vs. Keith Thurman in the works for July 20 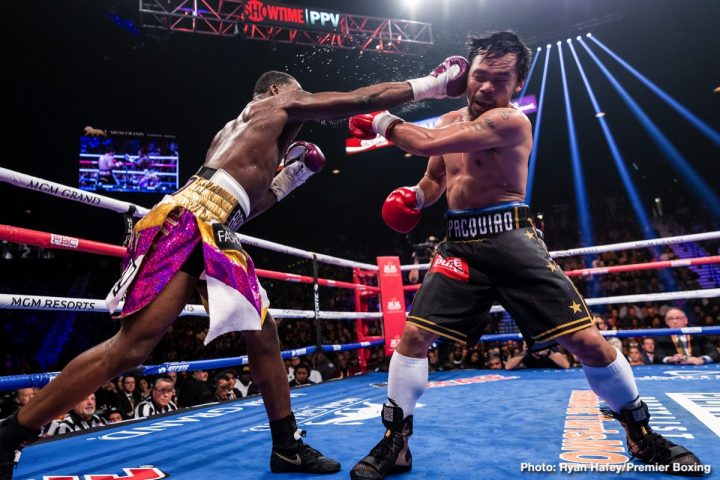 By Chris Williams: A fight between Manny Pacquiao and Keith Thurman is close to being a done deal for July 20 on Premier Boxing Champions on Fox pay-per-view in Las Vegas, Nevada, according to Mike Coppinger. The fighters don’t have any major issues keeping the fight from getting done.

If this gets made, it would be a tremendous fight. It might be the biggest welterweight contest of the summer. Terence Crawford just finished fighting Amir Khan, and he’s not expected to be matched against anyone noteworthy this summer. Errol Spence could be facing WBC champion Shawn Porter in September, but that fight doesn’t rival Pacquiao-Thurman in terms of two-way interest.

“Manny Pacquiao and Keith Thurman are closing in on a deal for a FOX PPV welterweight title bout that’s being pegged for July 20 in Las Vegas,” said Coppinger on his social media site. “There doesn’t appear to be any big hurdles to clear in completing deal. Big-time fight this summer.”

Unlike last Saturday’s horrendous mismatch between WBO welterweight champion Terence Crawford and Amir Khan on ESPN pay-per-view, the Pacquiao vs. Thurman fight is a PPV worthy fight on paper. This is a match that could be entertaining from start to finish. We likely won’t see Thurman or Pacquiao getting stopped on a low blow like we saw with Khan after he was hurt by a shot downstairs by Crawford.

Two years ago, this fight would have been perceived as a mismatch in favor of Thurman (29-0, 22 KOs), but not anymore. Thurman, 30, was out of the ring for two years dealing with injuries, and enjoying his life obviously. When Thurman came back from a 2-year layoff last January, he really struggled in beating Josesito Lopez by a 12 round majority decision at the Barclays Center in Brooklyn, New York.

Although Thurman knocked the 34-year-old Lopez down in the second round, he was badly hurt by him in the seventh round. Pacquiao (61-7-2, 39 KOs) has looked good in his last two fights in beating Adrien Broner and Lucas Matthysse. Manny, 40, found the fountain of youth, and he’s been looking impressive.

Thurman was seen as the best fighter in the welterweight division after Floyd Mayweather Jr. stopped fighting in 2015. Thurman moved into his spot, and looked impressive until he suffered an elbow injury in his win over Danny Garcia in 2017, and was sidelined for two years until coming back earlier this year on January 26 against the always tough Josesito. Thurman was close to being knocked out in round 7, and was lucky that he was able to make it tout of the round in one piece.

If Thurman is able to recapture the talent that he showed in his fights against Luis Collazo, Shawn Porter and Danny Garcia, then Pacquiao is going to be over his head when he gets inside the ring with him.

It’s surprising that Pacquiao is going in this direction to fight Thurman next, because he climbed into the ring after IBF welterweight champion Errol Spence’s win over Mikey Garcia on March 16 last month in Arlington, Texas, and he accepted a challenge to fight Spence. But it looks like Manny decided it wasn’t worth it for him to take the fight with Errol, because he’s not looking like he’s going to take that fight. How often you see a big name fighter make the effort to get into the ring with another high profile fighter, then agree that fight him, but then you don’t? It looks bad that Pacquiao changed his mind about wanting to fight Spence. At least Pacquiao should let Spence know that he does want to fight him at some point in the future. If Pacquiao dropped Spence a line to tell him that he still wants to make the fight later on down the line, it wouldn’t be as bad.


« Celebration of Claressa Shields to be held this Sat. in Flint, Michigan