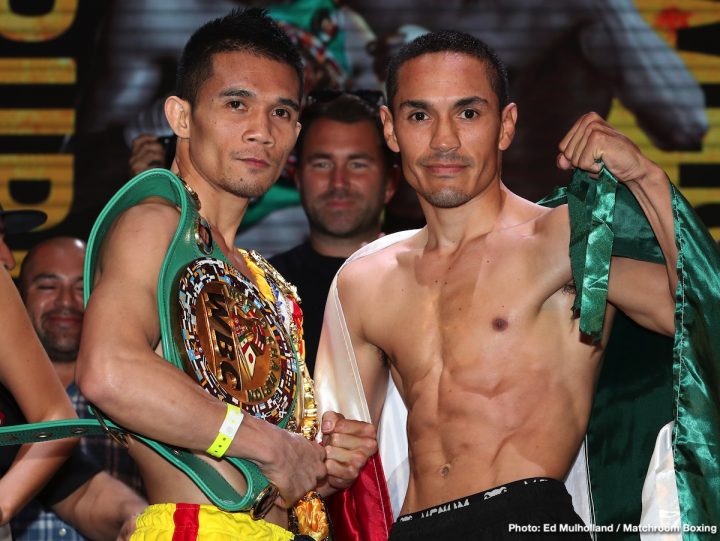 By Kenneth Friedland: WBC super flyweight champion Sisaket Sor Rungvisai (47-4-1, 41 KOs) will be looking to do a repeat tonight against former flyweight world champion Juan Francisco Estrada (38-3, 26 KOs) in their rematch on DAZN at The Forum in Inglewood, California.

Rungvisai, 32, beat Estrada by a 12 round majority decision a year ago on February 24 at The Forum. The crowd was firmly behind Estrada the entire fight, cheering loudly for him. The fight looked like it was dominated by Rungvisai apart from a strong finish in the 12th round by Estrada, who hurt the hard hitting fighter from Thailand with a flurry of punches in the closing seconds of the contest.

“I already beat him once, I’ll do it again in a war. I’ll return home with my title. It’s a fact!” Rungvisai said at Thursday weigh-in.

Estrada looked really cut up at the weigh-in last Thursday. It’s possible that he might have overdid it with his training for the contest. He’s never looked this cut up in any of his fights before. It’s understandable why Estrada put in a lot of hard work during camp, but more isn’t always better. If he’s weakened from all the work that he put in for the fight, he’s not going to do well against Rungvisai, who will be going after him from the opening bell to knock him out. Last time they fought, Estrada did a good job of avoiding Rungvisai’s punches by staying on the outside. But he couldn’t keep Rungvisai from hitting him with body shots that he was connecting with in each round.

Rungvisai weighed in at 114 1/4 pounds at the weigh-in. Estrada weighed in at 114 1/2 lbs. Estrada, 5’4″, will be enjoying a one inch height and a three inch reach advantage over the 5’3″ Rungvisai tonight. The last time the two fighters fought, Estrada was unable to take advantage of his size advantage over Rungvisai, because he looked like he was too afraid to get hit by him. When Rungvisai did land shots, the sound of the impact was like that of a much bigger fighter. Rungvisai punches like a welterweight, and that makes him incredibly dangerous in the 115 lb weight class. These guys aren’t used to getting hit by fighters with the kind of power that Rungvisai possesses. Boxing great Roman “Chocolatito” Gonzalez dominated three weight classes until running into Rungvisai. Chocolatito was beaten twice by Rungvisai, and he took a lot of punishment in those fights.

“The championship is going to Mexico. It goes for my family, for my team, for the people who have always supported me, for the company, and for the fans that trust and believe in me,” Estrada said.

It’s going to require a lot more effort and bravery from Estrada to have a chance of beating Rungvisai without controversy tonight, given how over-matched he looked in the first fight. Estrada lacked the punching power to stand in there with Rungvisai for any length of time. When Estrada did try and exchange with Rungvisai last time, he would get belted by huge shots that would send him fleeing. There was no other way to interpret Estrada’s actions other than to see it as someone that was looking to save himself from getting knocked out. Despite the pro-Estrada boxing fans at The Forum cheering loudly each time he would throw punches in the fight, they had little to cheer about, as the vast majority of the shots that were landed in each round were from Rungvisai. They were much harder shots. They were not only harder punches, but they were landing cleaner. Rungvisai fought well enough to win the first 11 rounds. It was a route until Estrada made a last ditch ever to score a knockout in the 12th round. Estrada had Rungvisa hurt and close to being knocked out. He ran out of time unfortunately.

Estrada needed to fight like that earlier in the contest to have a shot at winning, because he spent most of the fight moving around the ring, showing too much respect for Rungvisai’s formidibe power. When Estrada was moving, he wasn’t throwing punches. He was playing defense, and not looking to engage. It made scoring the rounds simple. However, two of the judges surprised the boxing fans afterwards by scoring it closely. They had it 115-113 for Rungvisai, and 114-114 even. The third judge seemed to have a better grasp of what had taken place in the fight in scoring it 117-111 for Rungvisai. Even that score was considered kind to Estrada, because he did nothing in the fight in rounds 1 through 11.

Unless Estrada does something different in this fight by fighting aggressively, he’s going to lose once against to Rungvisai. Depending on the quality of judges assigned to the fight, it could be more one-sided than the first fight. The judging for that fight was disappointing. They turned in scores that almost seemed like they based on the cheering from the crowd rather than the actual fight that took place. Estrada did zero last time other than in the 12th, but two of the judges almost had him winning, which was baffling. If Estrada doesn’t fight harder at an earlier stage tonight, he’s going to get embarrassed by Rungvisai, and sent packing for his second loss. The thing, Estrada probably fought the only way he could fight against Rungvisai. If he had mixed it up with him the early rounds, he likely would have been chewed up and spit out like Roman Gonzalez was in his two losses to the Thailand fighter. Gonzalez beat Estrada in the past. Estrada fought to survive last time against Rungvisai, but if he deviates from that strategy tonight, he could worked over. Hopefully, Estrada fights hard. His performance last time was even more negative than Mikey Garcia’s performance against IBF welterweight champion Errol Spence Jr. last March. Mikey looked brave compared to how Estrada fought Rungvisai. Estrada looked terrified, and wanted no part of Rungvisai.