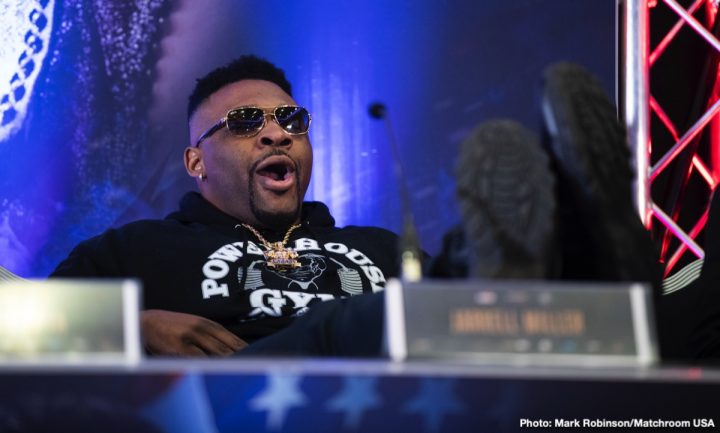 By Mark Eisner: In shocking news, Jarrell “Big Baby” Miller has reportedly tested positive for the banned substance HGH during a second VADA test after previously testing positive for GH1516. The positive test for HGH came from a test that was conducted on a different date by VADA than the one that came up positive for GH1516.

Miller’s positive urine test for March 20th VADA test was revealed this week from a VADA conducted test that had taken place on March 20. The results of that test led to the New York State Athletic Commission rejecting Miller’s attempts at getting a boxing license.

Until this week, Miller (30-0-1, 23 KOs) had been scheduled to challenge IBF/WBA/WBO heavyweight champion Joshua (22-0, 21 KOs) on June 1 at Madison Square Garden in New York. After the positive test for GW1516 was revealed, Miller took to social media to claim his innocence, saying, “I am absolutely devastated upon hearing the news…I have NEVER knowingly taken any banned substance and when I found out the news last night I was totally shocked. My team and I stand for integrity, decency & honesty and together we will stand to fight this with everything we have!”

We have now received news from VADA that Jarrell Miller has now failed a second seperate test for a further substance. AJ’s June 1 opponent will be announced next week – if you don’t think you can beat him clean then delete my number!

There’s no word yet whether there’s a B sample available for the positive test for HGH. Miller’s B sample for his positive test for GW1516 will be revealed on April 24. It was thought that Miller’s last chance of saving his June 1 fight against Joshua would come from the results of his B sample from his March 20th VADA test.

What are the odds of that happening? Who knows? It’s not looking good right now for Miller getting the Joshua fight, which is unfortunate for him, because he was about to get the payday of his life. Miller’s purse for the Joshua fight was over $4 million, and he could have made more from the percentage of the pay-per-view from the Sky Box Office money from the UK. Additionally, Miller would have made $3 million from DAZN for two comeback fights if were to lose to Joshua. If Miller beat Joshua, then he would get a big payday for the rematch. Now all that could be gone for Miller if he’s not able to be cleared from the two positive tests.