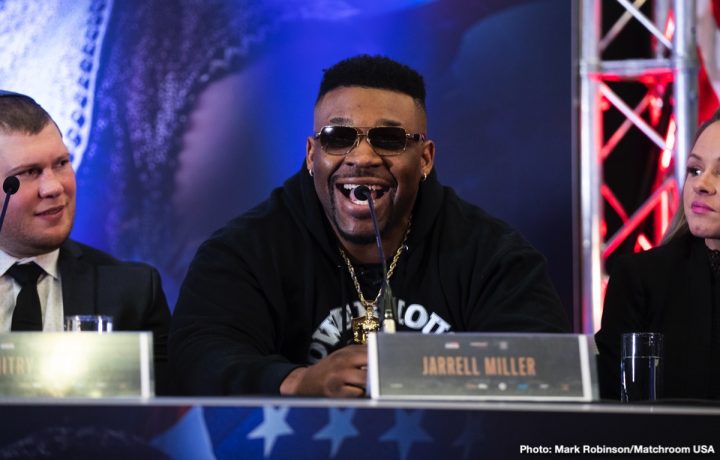 By John Kurth: Jarrell “Big Baby” Miller (30-0-1, 23 KOs) will have his B sample urine results opened and revealed next week on April 24 in what could be his last chance to save his June 1st title fight against IBF/WBA/WBO heavyweight champion Anthony Joshua (22-0, 21 KOs). There’s a chance, small as it is, that Miller could still face Joshua on June 1, as long as his B sample comes up negative. If it does, Miller will be back in business on his way to a mega-payday, and his boxing fans can rejoice.

Miller’s co-promoter Greg Cohen let ESPN know about the date his B sample will be opened. Miller’s A sample showed up as positive for the banned substance GH1516 from a random VADA test on March 20.

New York heavyweight Miller was previously set to get a colossal payday against Joshua on June 1 on DAZN and Sky Sports Box Office at Madison Square Garden. Miller’s positive test for the banned substance was revealed earlier this week on Tuesday. The New York State Athletic Commission then had a hearing on Wednesday, and denied Miller’s boxing license in the state. Since the fight is taking place in New York at MSG, Miller couldn’t shop around for another state to get a boxing license.

If there was contamination of the A sample that led to it testing positive for the substance, then perhaps the B sample will test clean of the banned substance GH1516.

Eddie Hearn, the promoter for Joshua, is already hard at work looking for a replacement, and he’s expected to make announcement for who that’ll be in the first part of next week. Of the opponents that Hearn is looking at, Americans Trevor Bryan (20-0, 14 KOs) and Michael Hunter (16-1, 11 KOs) are being mentioned a lot as possible options. Hearn said he wanted former heavyweight world title challenger Luis “King Kong” Ortiz (31-1, 26 KOs) as Miller’s replacement, but he had a chance to get a rematch with WBC champion Deontay Wilder. Ortiz doesn’t need to take the fight with Joshua on short notice. Bryan, 29, has faced little known opposition during his eight year pro career. Bryan’s best wins have come against BJ Flores and Derric Rossy. Flores was a quality cruiserweight at one time. Hearn could still possibly get Ortiz if he made him an offer he and his management couldn’t refuse. Given the alternatives, it might be worth overpaying the Cuban fighter.

The fighter that is expected to get the call to face Joshua is Matchroom fighter Michael Hunter. Hearn recently signed Hunter, who is a 2012 U.S Olympian. Being from the U.S and having fought in the Olympics makes the 30-year-old Hunter a credible option. What makes him a poor one though is he just recently moved up to heavyweight last year, and has had only three fights in the weight class against lesser opposition. Hunter is very light for the heavyweight division at 213 pounds. He looks like a cruiserweight more than a heavyweight. Of course, WBC heavyweight champion Deontay Wilder recently weighed in at 212 1/2 lbs for his last fight against Tyson Fury last December. The U.S boxing fans likely wouldn’t hold it against Hearn if he picks a small heavyweight like Hunter to stick in the ring with Joshua for his debut in the United States. The main problem with Hearn using Hunter as Joshua’s opponent is no one knows who he is. Even the hardcore boxing fans in the U.S are barely familiar with him.