Gary Russell Jr. vs. Kiko Martinez added to Wilder-Breazeale card on May 18 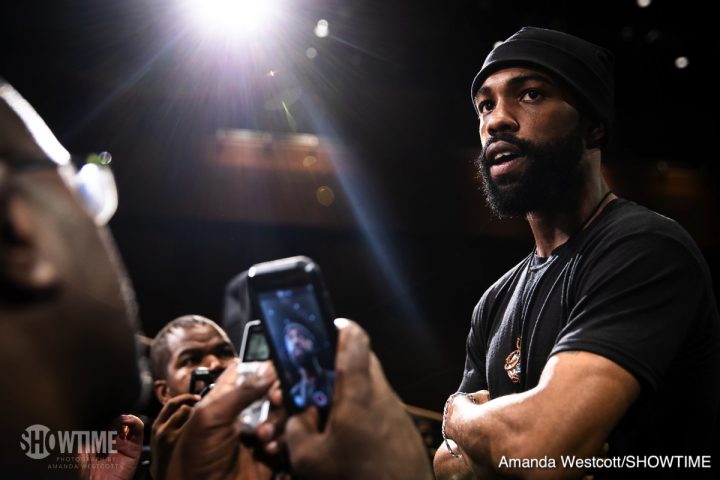 By Mark Eisner: WBC featherweight champion Gary Russell Jr. and #3 WBC Kiko Martinez have been added to the May 18th Deontay Wilder vs. Dominic Breazeale card as the co-feature on Showtime on Premier Boxing Champions at the Barclays Center in Brooklyn, New York. The fight card starts at 9:00 p.m. ET/6:00 p.m. PT.

This will likely be the 29-year-old Russell’s only fight in 2019, considering that he’s been fighting just once a year since 2015. It’s unclear whether the World Boxing Council is on board with Russell Jr. skipping his mandatory defense this year. Like all champions, Russell Jr. is supposed to be making a mandatory defense once a year for his WBC 126 lb title. If he’s only going to fight once a year, then the sanctioning body needs to ensure that he make that one fight against his mandatory challenger, which in this case is the 2012 Olympic silver medalist Tugstsogt Nyambayar (11-0, 9 KOs).

#3 WBC Martinez (39-8-2, 28 KOs) is a former IBF super bantamweight champion. He’s 33-years-old, and comes from Spain. Martinez is NOT the ideal opponent to be challenging for a world title, given that he’s LOST two out of his last eight fights since 2016. Two additional fights by Martinez have ended in draws. As such, Martinez’s record in his last eight fights is 4-2-2. That’s poor for a contender fighting for a world title. It’s a dismal record for a fighter ranked #3, but you have to blame that on the WBC in giving Martinez such a high ranking based on his lack of success. Martinez’s two losses came against Leo Santa Cruz and Josh Warrington.

Kiko Martinez’s recent victories in the last three years have come against these fighters:

Those are poor fighters or Martinez to be given such a high ranking by the WBC. You would expect the sanctioning body to pick out fighters with higher quality wins than Martinez has done recently with his career. Martinez was a good fighter for many years, but he’s been on the slide since 2015. Martinez’s last impressive win came five years ago when he stopped former three division world champion Hozumi Hasegawa in the seventh round. Martinez was at his best from 2013 to 2014. He just hasn’t done much since 2015 to this day.

“I expect to send a message to everyone in or near my division that I’m a force to be reckoned with,” said Russell in commenting about his upcoming fight against Martinez. “I want to unify against Leo Santa Cruz and I’m going to do what I have to do to get there. I’m never going to take any opponent lightly and right now, it’s my job to take care of Kiko Martinez before I worry about anything else. On May 18 you should expect to see excitement, punching power, hand speed, fast combinations and a great level of boxing IQ. I’m the best in boxing today and I prove that every time I get in the ring.”

Russell Jr. is a good fighter, but he’s not going to send a message to anyone by beating Kiko Martinez, who has been beaten in the past by Santa Cruz, Warrington, Scott Quigg, Carl Frampton [x 2], Rendall Monroe, an Takalani Ndlovu. The only thing Russell Jr. can accomplish by beating Martinez is to try and do it in a faster, more impressive fashion than those guys did. Quigg stopped Kiko in the second round in 2015, so that’s going to be tough for Russell Jr. to surpass.

Russell Jr. has a lot of talent, but he fails to utilize it by fighting just once a year against largely weak opposition. Russell Jr. hasn’t gone out of his way to fight talented guys, which is disappointing, because he could already be a star by now if he fought three times a year against the best opposition instead of fringe level fighters. For example, in the last three years, Russell Jr. has fought these fighters: Joseph Diaz Jr., Oscar Escandon, and Patick Hyland. Diaz is a good fighter, but Russell Jr. had to fight him because he was his WBC mandatory. Russell Jr. lost to Vasiliy Lomachenko by a 12 round unanimous decision in June 2014 in a competitive fight. Russell was getting the better of Lomachenko early on with his hand speed advantage, but Loma made adjustments by using movement and he was able to cruise to a victory.

Once Russell starts losing his skills due to age, he’s likely going to wish he’d done more with his years as a world champion. There are so many big fights that he already could have been involved in at featherweight. He should have already fought Oscar Valdez, Santa Cruz, Josh Warrington and Jessie Magdaleno. If Russell Jr. moved up in weight to super featherweight, he would have some great opportunities available to him in fights against Tevin Farmer, Miguel Berchelt, Gervonta Davis and Andrew Cancio.