Hopkins: ‘Ryan Garcia is a threat to 135 lb champions’ 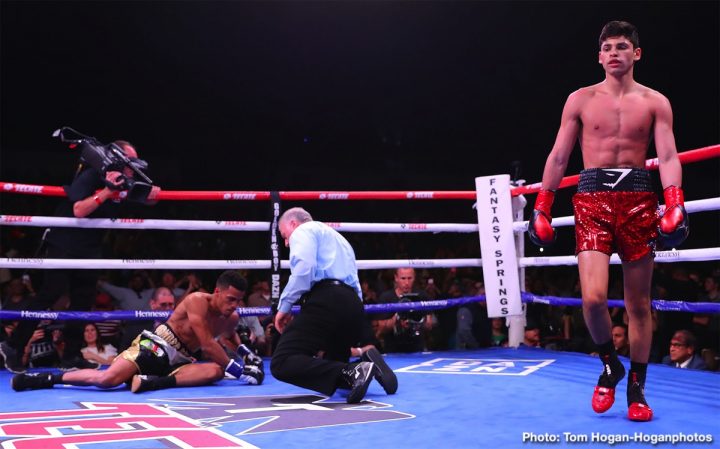 By Aragon Garcia: Bernard Hopkins says Ryan Garcia showed last Saturday night that he’s a threat to all the lightweight champions with his lightning fast second round blowout win over Puerto Rican fighter Jose Lopez in a 10 round scheduled contest on DAZN.

Hopkins doesn’t have a champion in mind, but there’s only three – Mikey Garcia, Vasiliy Lomachenko and Richard Commey to choose from. Any of those three names are going to be tough but winnable fights for the 20-year-old Ryan Garcia.

Garcia took out the 25-year-old Lopez with a brutal storm of shots at the end of the second round last Saturday night at the sold out Fantasy Springs Resort Casino in Indio, California.

“Let’s talk about Ryan Garcia tonight and his stoppage win. I was not concerned with him winning or losing, but how he wins [performed],” Hopkins said to Fighthub. “You can lose fanfare and the momentum that he has if you just go in there and win and struggle with the win. Then there would be some doubts about how long before he fights for a world title. Tonight was a statement, as far as the world saw his performance. You now must put him in the conversation with the #1 and #2 [contenders at lightweight] or champions that hold titles, that he’s knocking on the door. He’s really a threat to anybody that holds titles in that division. That’s what I saw tonight,” Hopkins said of Garcia.

The fighter that Ryan Garcia is calling out is WBA Super World super featherweight champion Gervonta ‘Tank’ Davis. He’s not a lightweight, but he’s big enough to fight in that weight class. Garcia is also interested in fighting Mayweather Promotions lightweight Rolando ‘Rolly’ Romero, but he wants a big paycheck to take that fight. Garcia stands to gain a lot more if he can fight Gervonta and beat him than Romero, who isn’t a world champion and is less well known than Gervonta. Both Davis and Romero are with Mayweather Promotions. Both are doable fights for Ryan Garcia, and both could be tough outs for him.

Garcia put on a punching display in the final seconds of round two that left Lopez looking hurt after getting knocked down. Garcia had taken some shots from Lopez in the first round, but in the last part of the round, Garcia turned it up and hurt him.

The top lightweight contenders in the division today are these guys:

Those are all talented fighters at lightweight that would be the main competition for Ryan Garcia. For him to be viewed as better than those guys, it’s a huge compliment by Hopkins, because those are all good fighters with loads of talent and power.

“I’m pushing him for one more opponent, and then go right for a world title in this year, 2019,” Hopkins said. “I believe he’s ready. I believe a bump up from tonight’s fight. He didn’t have a walkover tonight. He didn’t have someone that came in there with the mindset of ‘I’m just going to in there and get a paycheck.’ Ryan Garcia took instructions and went out and delivered. That shows smarts. That shows he listened, and that shows that he’s getting to the point of growing into that mentality and body. So he’s got two things got for his future opponents. His mental strength after growing into his manhood, and physical strength that I seen with the combination punches that he delivered tonight. Yeah, [Ryan Garcia wants a big fight], he wants that. That’s what he wants. It’s no hype. Sometimes you see a fighter that looks great, that talks great, but doesn’t normally fight good. He can do all three,” Hopkins said of Ryan Garcia.

We’ll have to see what Golden Boy Promotions boss Oscar De La Hoya and his match-maker with the company choose to do with Garcia in his next fight or two. They’re going to need to step him up against a better opponent for his next fight if they want to get him ready for a world title shot against champions Mikey Garcia, Vasiliy Lomachenko or Richard Commey. Jose Lopez was a good fighter, but he isn’t good enough to give Garcia an approximation of what he’ll be dealing with when/if he gets in there with lightweight champions Mikey Garcia, Richard Commey or Lomachenko. Those guys are on a whole different level than the fighters that Ryan Garcia has been fighting. That’s why if Hopkins and De La Hoya are serious about wanting to put Garcia in with one of the word champions at lightweight in 2019, they’e got to give him a good test for his next fight. Campbell, Teofimo Lopez, Linares, Berinchyk, Haney or Barthelemy would be a good step up for Garcia. He’s got to be able to beat these guys for him to have any chance of beating lightweight champions Vasyl Lomachenko, Mikey Garcia or Richard Commey. Garcia has a good chance of beating one of those three to become a world champion at age 20. That would be an incredible accomplishment for Garcia to win a world title if he looks good in doing so.