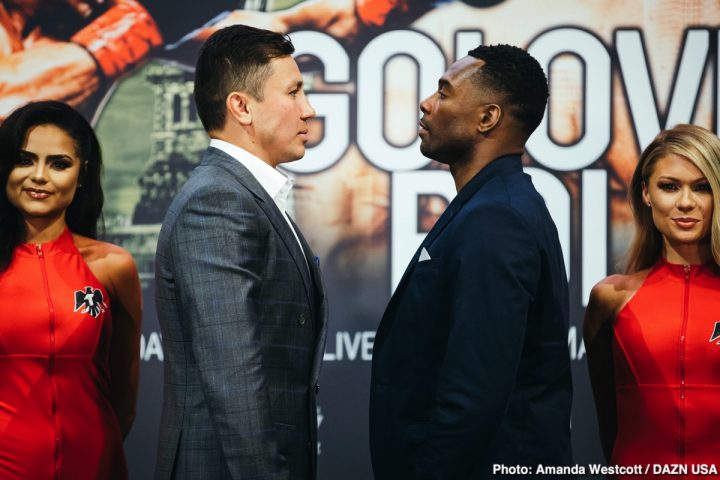 By Trevor McIntyre: Gennady Golovkin and Steve Rolls met earlier today in their press conference in New York to talk about their upcoming fight in less than two months from now on DAZN on June 8 at Madison Square Garden in New York.

The unbeaten Rolls (19-0, 10 KOs) revealed that he’s been doing a lot of reading and noticing how the media is calling this a “tune-up” fight for former IBF/WBA/WBC middleweight champion GGG. Rolls, 35, says he’s taking this fight to win it, and “shock” the world when he gets in the with the highly accomplished Golovkin. Even though Rolls hasn’t beaten a credible opponent in his eight-year pro career, he still feels he’s got enough to send the 37-year-old Golovkin down to his second career defeat when they get inside the ring in their catchweight fight at 164 pounds on the eighth of June at MSG in New York.

Rolls is facing Golovkin at the perfect time in his career. Golovkin is coming off a hard 12 round majority decision loss to Saul Canelo Alvarez last September in their rematch on HBO pay-per-view. Regardless of whether the boxing public disagrees on which of the two superstars deserved to win the fight, it was hard fight for both of them, especially GGG, because he was hard more often by Canelo with cleaner-landing shots.

Golovkin is also older than Canelo, so that plays a factor as well. Golovkin might be a harder puncher overall than Canelo, but he had take a lot of the steam off his shots to land them. When Golovkin did connect with everything he had, Canelo was mostly going with the punches to take the power off of them. Later in the fight, Golovkin hit Canelo with big uppercuts in the 10th and 11th rounds that visibly hurt him. On those shots, Canelo couldn’t ride with the punches, because uppercuts, and they snapped his head backwards. Canelo took them, but he was definitely hurt.

“I’ve been doing a lot of reading lately and there are a couple things I keep coming across – ‘Who is this guy?’ and ‘This is going to be a tune-up fight.’ I’m the underdog that’s been hungry for this position,” Rolls said in talking about how so few boxing fans and members of the media know who he is.

It’s obviously a new experience for Rolls to be an underdog in one of his fights, and he’ having a hard time coming to terms with that. It wouldn’t be such a new thing if Rolls had been fighting world class contenders in the last eight years of his career, but some reason his management hasn’t ever stepped him up until now against top level opposition. In this fight, it’s case of GGG’s promoter picking Rolls out out of the blue. They could chosen anyone in the middleweight or super middleweight divisions, and they Rolls.

DAZN was on board with Rolls as GGG’s opponent, according to Golovkin’s trainer Abel Sanchez. It’s unclear what they saw in Rolls that makes them believe he’ll bring in the subscribers in a fight with Golovkin, because few U.S boxing fans have ever hard of him. He’s an unknown. It’s a good idea for Golovkin to be matched against a lesser, fringe level opponent to help build him up in order to increase the interest in his potential future fights against Canelo Alvarez, Daniel Jacobs and Demetrius Andrade. Never the less, it’s disappointing for a lot of boxing fans to see Golovkin matched this weekly.

“Make no mistake this isn’t a tune-up. I’m coming to fight. And with everybody, who doesn’t know me now, after June 8, you won’t forget me. I’ve got much respect for Gennady Golovkin, but I’m coming to shock the world,” Rolls said.

It would be a MASSIVE shock for Rolls to defeat Golovkin, considering that the best name the Canadian fighter has on his resume is journeyman KeAndrae Leatherwood. There’s no shame in Rolls fighting a guy like Leatherwood, but it’s disappointing that he just now fought him in his last fight in December. To go from battling a journeyman level fighter in Leatherwood to facing an elite level fighter in GGG is going to be a big step up in class for Rolls. He likely won’t do well unless Golovkin is depleted from his last fight against Canelo.

You can’t rule out an upset for Rolls, but it’s going to require an exceptional effort from him for him to do it. He’s offensively inclined, and not hard to hit. Rolls will need to be able to take a lot of heavy shots from Golovkin for him to win this fight. If Rolls can follow the blueprint that Canelo and Daniel Jacobs created in how to beat GGG, then he could pull it out. Rolls has to back Golovkin up, because he doesn’t fight well going backwards.