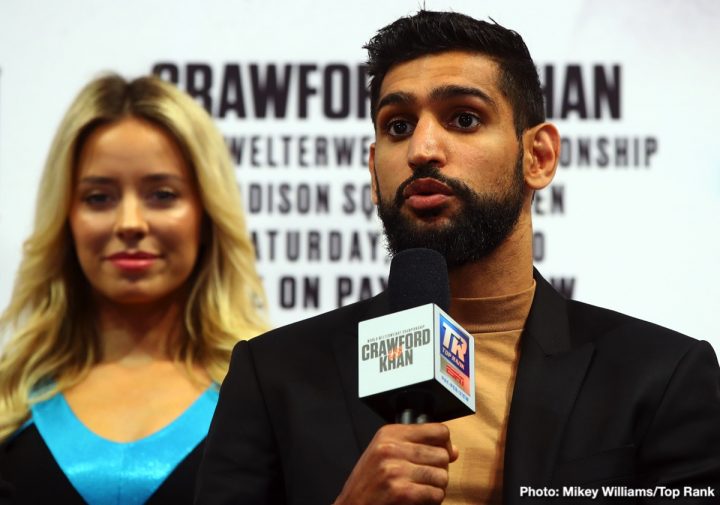 By Chris Williams: Danny Garcia rates the Terence Crawford vs. Amir Khan as a 50-50 affair, and he thinks it could come down to which of the two lands a good shot. Although Garcia feels that Khan (33-4, 20 KOs) can’t handle power punchers, he believes that his fighting style will be a problem for Crawford (34-0, 25 KOs) with his hit and move approach.

Crawford likes to move as well, but eventually needs to come forward to land, and that’s where he could have problems against Khan.

The biggest thing that Khan, 32, has on his side is he doesn’t have any pressure on him. With the entire boxing world picking Crawford to win, Khan has that weight off his shoulders of being seen as the favorite. In most of Khan’s fights, he’s been the favorite.

Against Saul Canelo Alvarez, khan obviously was viewed as the underdog, but he moved up two weight classes to take that fight. He was going to have problems against the heavier, stronger punching Alvarez regardless of not having pressure on him.

“Skill-wise, I think it’s a good fight. People are only interested in how long Khan’s going to last, because he obviously can’t take a good punch,” Danny Garcia said to Fighthub. “This is not a secret, but he’s good at fighting southpaws. Like, he destroyed Zab Judah, Devon Alexander he made easy work. I don’t think Crawford’s southpaw style will be an advantage. I think that’s been a key in his career. I think Crawford’s going be more right-handed this fight. I think it’s a 50-50 fight until a good shot lands. Khan has the style to beat him; hit him, move. But we’ll have to see,” Garcia said.

Crawford hasn’t won fights because of his ability to switch to southpaw. The whole switch-hitting thing that Crawford is overrated. If you look at his fights closely rather than listening to people talk, Crawford does much better when he’s fighting in his normal right-handed stance. When Crawford is fighting left-handed, he doesn’t do a better job than he does when he’s fighting right-handed. It’s wasted motion on Crawford’s part, and since he’s usually fighting flawed opposition, he can look good doing anything. Crawford could stand on his head and look good against the type of fighters that he’s been facing.

Look at Crawford’s last 12 fights and you can see for yourself that he’s not been facing the best: Jose Benavidez Jr., Jeff Horn, Julius Indongo, Felix Diaz, John Molina Jr., Viktor Postol, Henry Lundy, Dierry Jean, Thomas Dulorme, Raymundo Beltran, Yuriorkis Gamboa and Ricky Burns. None of those fighters are major players in the divisions that they’re currently fighting at. Jeff Horn is ranked #15 by the WBC. Benavidez isn’t ranked in the top 15 by anyone. Crawford has fought a lot of weak guys, and he’s done well against those type of fighters. Khan has obviously been picked because he’s seen as weak, so it all continues.

“You have to be good at fighting southpaws, because you’ve been fighting right-handers your whole career. You know what to do against them,” Garcia said about fighting a guy that switch-hits like Crawford. “If you can fight a southpaw good, you should be able to adjust, easily.”

Former two division world champion Danny Garcia (34-2, 20 KOs) has his own fight this Saturday night on Premier Boxing Champions on FOX and FOX Deportes at the Dignity Health Sports Park, in Carson, California. Garcia, 31, will be fighting Adrian Granados (20-6-2, 14 KOs) in a 12 round bout for the vacant World Boxing Council Silver Welterweight Title. On the undercard of Garcia-Granados, is heavyweight contender Andy Ruiz Jr. fighting the 6’7″ Alexander Dimitrenko in a 10 round bout. Also on the card is undefeated Brandon Figueroa fighting Yongrez Parejo in a bout for the interim WBC super bantamweight strap. The Garcia vs. Granados card starts at 8:00 p.m. ET/5:00 p.m. PT on Fox and Fox Deportes.

When Danny Garcia was asked if he’d be interested in facing Crawford, 31, in the future, he said this:

It sounds like Garcia is tempted at getting in on the act to get some of the big money that Top Rank is throwing around to get opponents for Crawford to try and turn him into a star before he gets much older, and is no longer the guy he is right now. Garcia is said to have been offered $3 million to fight Crawford by Top Rank. For this Saturday’s fight, khan is getting a guaranteed purse of $5 million plus a percentage of the pay-per-view revenue. That’s good money. Garcia being offered less than what Khan is being given shows that he wasn’t seen as a highly desirable opponent for Crawford. It’s doubtful that Garcia would now accept less than what Khan received for a fight against Crawford. Garcia is with Premier Boxing Champions, and it’s extremely doubtful that he would EVER fight Crawford. Khan’s a different story. His situation is completely different from the other PBC fighters. He’s not someone that has as much time left with his career, and he sees value in fighting guys like Crawford. In hindsight, it’s a probably going to turn out to be a bad move for Khan if he loses, because he likely would have ended up getting a fight against Manny Pacquiao if he focused on fighting only PBC guys.

We don’t even know how good Crawford is because he’s yet to face an elite level fighter during his career. You can’t call Horn, Benavidez, Postol, Beltran, Molina Jr., Jean or Ricky Burns elite fighters.

Danny Garcia says he’s going to be moving up to 154 after two more fights. He jokes that he doesn’t want to face the huge junior middleweights Jermell Charlo and Jarrett Hurd, but he says he’ll fight anybody in that weight class. It could be a mistake if he does move up. He looks small at 147 compared to the likes of Errol Spence Jr.