Hearn concerned how Joshua vs. Ruiz Jr. fight will be perceived by fans 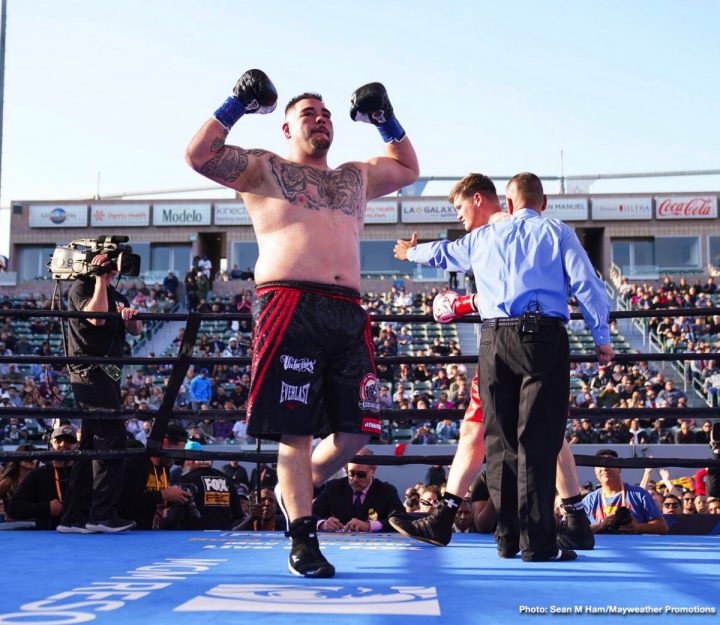 By Kenneth Friedman: Eddie Hearn likes Andy Ruiz Jr. as a potential opponent for heavyweight champion Anthony Joshua to face on June 1st at Madison Square Garden in New York. However, Hearn is concerned with how the casual boxing fans will perceive the fight when they see the heavy set Ruiz Jr. in boxing shorts. Despite being considerably lighter than the 315 pound Jarrell “Big Baby” Miller, Ruiz, 6’2″ 262 lbs, looks fatter for some reason, and that’s going to make it tough for Joshua to put on a favorable impression with U.S fans for his debut in the country.

In contrast, Miller (23-0-1, 20 KOs) looks like a big guy that has fat well distributed everywhere on his 6’4″ frame. In the case of Ruiz, he’s carrying a lot of his fat around his midsection the way that people normally do when they’ve been eating and not exercising.

Joshua was set to fight Miller, but the New Yorker was popped on 3 drug tests by VADA for performance enhancing substances.

“Here’s what Eddie Hearn told me about Andy Ruiz: ‘I like Andy Ruiz. He’s a character. The tough sell with Andy Ruiz is, with the casual fan, they’re going to look at him in his shorts and say, ‘What’s that all about?'” Lance Pugmire said on his social media site.

Hearn is correct in how the average boxing fans in the U.S will look at the Joshua vs. Ruiz fight. Like anyone that sees a fighter that doesn’t look like a well-trained athlete, the casual fans in the States will see Ruiz Jr. (31-1, 21 KOs) walk out into the ring to face Joshua (22-0, 21 KOs) on June 1, and the likely reaction will be a negative one just based on Ruiz’s appearance. The end result will be a less favorable impression of Joshua, no matter how good he looks in defeating Ruiz.

Even if Joshua annihilates in the first round, a lot of casual boxing fans will be turned off. They’ll not give Joshua credit for defeating Ruiz just because out of shape he looks. Unfortunately, people judge athletes by their appearance. Joshua will be in a no win situation in facing Ruiz. If AJ struggles to beat Ruiz, then he’ll be perceived negatively by the many American boxing fans that will be seeing him fight for the first time. Those fans have likely never seen Ruiz, and fail to understand that he’s a pretty good fighter. The fans will judge him by the way he looks.

“Hearn told @MarkEOrtega that he’s prepared to reveal emails that prove Luis Ortiz was in position to earn more than $5 million but rejected it. Hearn seems to be down to Andy Ruiz and Michael Hunter. Ruiz is going to come to fight, he says, and brings Latino audience,” Hearn said.

Luis Ortiz (31-1, 26 KOs) would have been a good choice for Joshua to fight, but he supposedly priced himself out by asking for too much.

The announcement for Joshua’s June 1st replacement opponent was supposed to have been made this week by Hearn, but it looks like he’s dragging it out. This is a big hint that it’s going to be Ruiz Jr. as the opponent for AJ. Ruiz is with Premier Boxing Champions. The negotiations won’t be easy for Hearn because he’s with DAZN.

“I want someone to come and try to knock Anthony Joshua out,” Hearn said to Fighthub. “I don’t want a guy who turns up not really believing they can win, gets knocked out in two rounds without throwing punches. I want a guy that comes with confidence and heart and belief. There’s about two or three guys that will do that and Andy’s one of them.”

Luis Ortiz is one of them too, but that fight isn’t happening for Joshua. There are a lot of guys that will be trying to beat Joshua. Hearn is overlooking them obviously.


« Crawford vs. Khan does 150K PPV buys according to source