Canelo vs. Jacobs: Daniel – “The chance for a knockout is high” 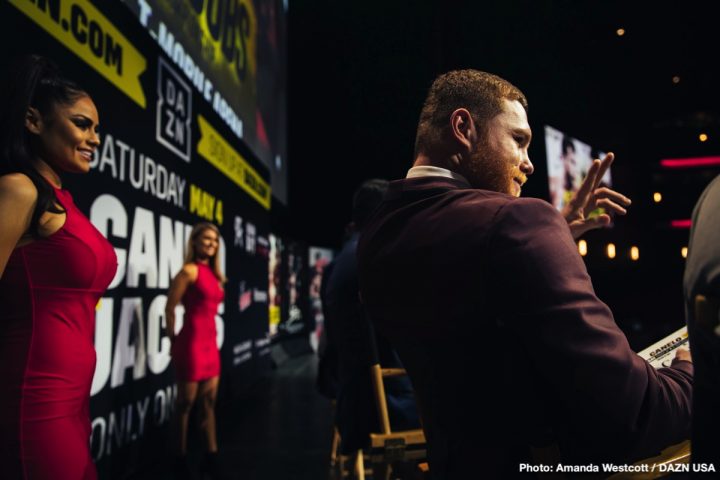 By Sean Jones: Daniel Jacobs is predicting a knockout will likely occur in his fight against Saul Canelo Alvarez in their showdown in less than a month from how on May 4 on DAZN. Jacobs (35-2, 29 KOs), who is one of the biggest punchers in the middleweight division, if not the biggest, sees their huge fight ending with a stoppage either way.

IBF middleweight champion Jacobs, 32, is obviously being modest by not saying that it’s going to be him that is doing the knocking out in this fight, because he doesn’t plan on getting stopped by the shorter 5’8″ Golden Boy star on the night. Jacobs has come too far in his last three fights to blow it all on May 4 against the Mexican superstar Canelo Alvarez when they battle it out for bragging rights as the best fighter in the 160 lb weight class at the T-Mobile Arena in Las Vegas, Nevada.

“I think the chance of a knockout is high,” Jacobs said about his fight against Canelo. “I really respect Canelo. He didn’t have to take this fight. I know he’s willing to face anybody.”

Who knows what Canelo, 28, would have done had he not signed a big $365 million, 5-year, 11 fight deal with DAZN. Would Canelo have still agreed to fight a lion like Jacobs if he hadn’t signed that deal? Some boxing fans feel that Canelo had no other choice but to take the fight with Jacobs to try and earn that big contract, and make it all the way to the end. Unless Canelo’s entire 11-fight contract with DAZN is guaranteed, and there are many who feel that it’s not a guaranteed, then it means he needs to produce by fighting the best possible opponents to bring in the subscribers to DAZN. Canelo can’t do that if he’s going to cherry pick opponents like Rocky Fielding, and or the weaker middleweight contenders that few casual boxing fans in the United States of ever heard of. Canelo needs to fight the guys that the American fans know of, and that means Jacobs, Gennady Golovkin, Jermall Charlo, Jarrett Hurd, Jermell Charlo, Erislandy Lara, Sergey Kovalev and to some extent, Demetrius Andrade. Canelo might need to take some serious risks to bring in the subscribers to DAZN once he’s faced Jacobs and Golovkin.

“Canelo is going to fight the strongest puncher he’s ever fought, including GGG. This is a whole different beast,” De La Hoya said to Sporting News 50-50.

Jacobs and GGG are both close to the same level as far as power goes. Jacobs might hit harder than Golovkin with his overhand right. But far as the uppercuts go, GGG might hit harder with that punch. The two uppercuts that Golovkin hurt Canelo with in rounds 10 and 11 in their most recent fight last September were shots that looked devastating. Canelo took them, but he was hurt and on weak legs both times. The scoring for the fight didn’t reflect the huge shots that Golovkin landed in the fight obviously. Jacobs has more enough power to knockout Canelo if he doesn’t fight scared, and use up his energy by running around the ring like he did in the first six rounds against Golovkin. Jacobs is a lot better fighter when he’s coming forward fighting flat-footed in a seek and destroy mode rather than fighting going backwards. That movement takes too much out of Jacobs, and weakens him. It would be that way for anyone. If you run for three miles, and then try and stop and fight someone, you’re not going to have the same kind of power than if he stood and fought without running.

This is an excellent fight that can go either way. Canelo hasn’t lost a fight in six years since Floyd Mayweather Jr. beat him in 2013. Jacobs has a three-fight winning streak since his defeat at the hands of Gennady Golovkin in March 2017. Jacobs did a better job against GGG than Canelo did in his first fight in 2017 in fighting to a controversial 12 round draw. Canelo appeared to lose that fight by 8 rounds to 4, although the Nevada judges scored it a 12 round draw. Jacobs fought Golovkin well enough to get a draw or a close defeat. Their fight was about as close as Canelo’s second fight with GGG, which he won by a 12 round majority decision last September.

“Canelo is a fighter who dares to be great, who wants to make history in his own right,” said Golden Boy Promotions CEO Oscar De La Hoya said to Canelo vs. Jacobs 50-50. “Therefore, he fights the very best. Daniel Jacobs is probably one of the most toughest middleweights out there today.”

Canelo is fighting one of the best in his unification contest against Jacobs, but he didn’t do that in his last fight against Rocky Fielding, did he? Canelo doesn’t always fight the best. But it’s likely from this point on, Canelo will be trying to fight the best. Whether that can happen or not will depend on the need for Golden Boy to setup fights with fighters like Jermall Charlo, who isn’t with DAZN. If Canelo vs. Jacobs ends in controversy, if it’s close of if he loses to him, then those two will likely fight each other in September. The trilogy fight with GGG for Canelo would be pushed to either December or next year in May.

“I could’ve done it. I honestly could’ve done it and fight whoever I wanted, but what motivates me is the possibility to make history, leave a legacy behind. My team and I have that objective. As I’ve always said to give the audience the best fight possible is truly what’s important to me. In addition, I also want to be satisfied with myself and my career,” Canelo said.

You’d have to disagree with Canelo in him saying that he could have fought whoever he wanted to. There’s got to be pressure on him to fight the best possible opponents now that he’s signed the big contract with DAZN. That company didn’t give Canelo that contract, which he has to earn, so that he could hand-pick soft jobs for the next five years to make sure he doesn’t get beat again. Canelo has to fight the best, and that’s not going to be easy for him do to. Golden Boy Promotions has put Canelo in a position where he has a good chance of winning by having the fight take place at the T-Mobile Arena in Las Vegas, which is the same venue the Mexican star fought in his two fights against GGG. But that doesn’t guarantee that Canelo will be given the victory if he doesn’t go out and actually earn it by fighting well, and doing what he needs to for him to have his hand raised without controversy. Canelo has got to find a way to get the better of Jacobs, and that might not be possible for him due to the size disadvantage that he has. Jacobs can actually fight, which is more than what you can say about Canelo’s last opponent Rocky Fielding.

Boxing » Canelo Alvarez » Canelo vs. Jacobs: Daniel – “The chance for a knockout is high”