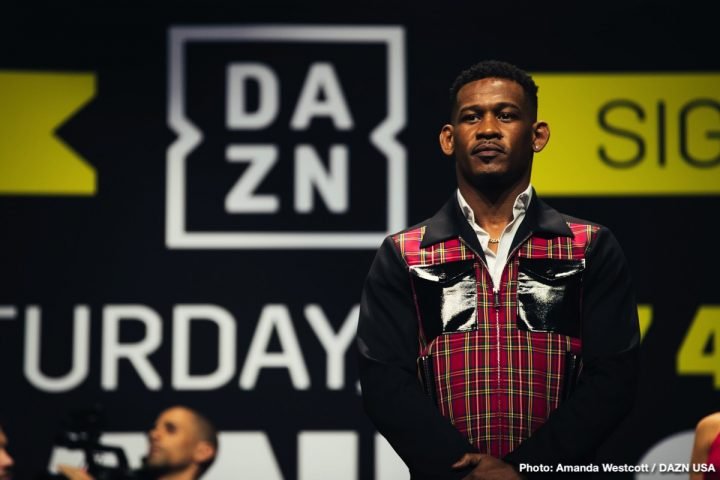 By Sean Jones: Daniel Jacobs just barely made WBC’s mandated 30-day weight check in coming in at 175.4 pounds for his May 4 unification fight against Saul Canelo Alvarez. The WBC’s weight limit is 176 pounds, and Jacobs (35-2, 29 KOs) just barely made that by half pound to spare. Canelo weighed in at 7.2 lbs lighter at 168.2 lbs for his 30-day weight check on Friday.

The difference between the two fighters’ weight seems to suggest that the 5’11 1/2″ Jacobs will be the heavier fighter on the night than the 5’8″ Canelo, which makes a lot of sense given how much bigger Daniel is. What we don’t know is how much weight Jacobs and Canelo lost to get down to the World Boxing Council’s 176 lb weigh-in limit for 30-day weight check. It’s likely that Canelo’s true weight right now is close to the 168.2 lbs that he weighed in for last Friday. I mean, it wouldn’t make sense for him to dehydrate all the way to 168 lbs, when the weight limit is 176. The 175.4 lbs that Jacobs came in at suggests that he probably had to take off a lot of weight. It wouldn’t be surprising if Jacobs is weighing around 185 lbs, and had to lost 10 lbs to make the WBC’s 30-day weight check.

This is going to be one of the rare fights in which Canelo is the lighter guy on the night of the contest on May 4. Canelo’s last opponent, super middleweight Rocky Fielding, looked to be heavier than him in their fight on December 15 last year, but he wasn’t a talented fighter and was easily beaten. Being bigger only helps if the fighter has some actual talent. Jacobs can fight, and he’s not just big. He’s got the speed, size and mobility to give the shorter 5’8″ Canelo a lot of issues in this fight.

Jacobs (35-2, 29 KOs) will have his IBF middleweight title up for grabs when he fights WBA/WBC champion Canelo Alvarez (51-1-2, 35 KOs) on May 4 on DAZN at the T-Mobile Arena in Las Vegas, Nevada. The winner of this unification fight will hold the IBF, WBA and WBC 160 lb belts, and will only need the WBO title to unify the entire middleweight division. It’s unclear how devoted Canelo is in accomplishing that task. It’ll depend on what the sanctioning bodies do. If the WBC, for example, orders Canelo to defend against interim WBC champion Jermall Charlo after the Jacobs fight, then it’s possible Canelo will vacate the WBC belt rather than face him. There’s not a lot of interest in Canelo vs. Andrade. The boxing public wants to see Canelo fight Gennady Golovkin again.

“This is a tough, tough fight. I see it as a 50-50 fight,” Jacobs’ promoter Eddie Hearn said to Sporting News. “The fact that he [Canelo] was willing to go to a 50-50 fight at this stage in his career with the deal that he has [with DAZN], with the fan base that he has, with the profile that he has, tells me that Canelo Alvarez is serious.”

Hearn sounds like he doesn’t realize that Canelo NEEDS to fight the best now that he’s been given the big contract by DAZN. Canelo can’t just fight whoever he wants to after being given the 11-fight, $365 million contract. He’s got to fight the best talent now, so it’s not likely he could have taken more soft opponents after he beat Fielding, who was considered an easy opponent. Canelo obviously isn’t fighting Jacobs for charity purposes or to be kind to the New Yorker. If Canelo were to take just record-padding fights at this point against the weak opposition, he’d hurt his popularity.

Jacobs has the power to give Canelo nightmares if he chooses to use it. Jacobs doesn’t always use his power, as we saw in his fights against Golovkin, Dmitry Pirog and Maciej Sulecki. When Jacobs is afraid, he gets on his bike and trys to evade his opponents rather than fighting them.

“It’s fighter that move a lot that have always been difficult for Mexican boxers,” Canelo’s trainer Eddy Reynoso said about Jacobs. “Jacobs will try to repeat the same script from the fight against Golovkin. I’m sure about it, because that’s the only way he can get the victory, using his legs, being fast and switching the guard. These continuous movements may be hard to manage for Canelo,” Reynoso.

Jacobs is the far better mover of the two. Canelo doesn’t move well because his legs are too short, and thin. Canelo has Babe Ruth-like legs. They’re thin like Ruth’s legs were, and he has knee problems that he wears a brace for. Canelo won’t be able to chase Jacobs if he uses movement in the fight. However, Jacobs won’t win if he tries to move all night long because it’ll look bad in the eyes of the judges if he’s on continually moving. Jacobs must make a fight of it, because he’s facing what Golden Boy Promotions CEO Oscar De La Hoya refers to as, “The face of Boxing” in Canelo Alvarez. Jacobs isn’t going to beat a fighter with the popularity that Canelo has going for him if he moves all night long. Maybe if the fight were to have been staged in Brooklyn, New York, Jacobs might be able to win by moving a lot, but not in Las Vegas, where Canelo frequently fights, and he brings a great deal of money to the city with his huge fights that he stages there.

“I think Canelo’s biggest strengths inside the ring is maybe his speed, his elusiveness, and his experience, and he comes to fight,” Jacobs said. “But as a middleweight physically, he has a lot of disadvantages, because he’s not the middleweight. I’m talented, and you’re talented, but I’ve got most of the advantages. I’m going to use my advantages to get the victory despite all what you’ve accomplished,” Jacobs said.

Jacobs has physical advantages of Canelo, but he’s going to have to fight smart to make sure he uses them. Jacobs squeaked by his last two opponents Sergiy Derevyanchenko and Maciej Sulecki in winning fights that went the full 12 round distance. Jacobs looked like the better man in both fights, but only by the narrowest of margins. The fights should have been easier for him than they turned out being. Part of the problem Jacobs had is he used too much movement in both fights, and this allowed these guys to pressure him and land shots. When Jacobs stopped moving, he was able to get the better of both of them. He wasted a lot of time in moving in the first half of the fights, which made them close fights. Jacobs will need to be more stationary against Canelo if he wants to get win, because he’s fighting in his venue at the T-Mobile Arena in Las Vegas. Canelo’s two fights against Gennady Golovkin at this venue showed that the only way for his opponents to beat him is to take the fight to him and out-slug him. GGG did that in the second half of their rematch last September, but he gave away too many of the early rounds by moving too much. Jacobs can’t make the same mistakes that GGG did if he wants to beat Alvarez on May 4.