McGuigan 90% sure Josh Taylor vs. Ivan Baranchyk will happen on May 18 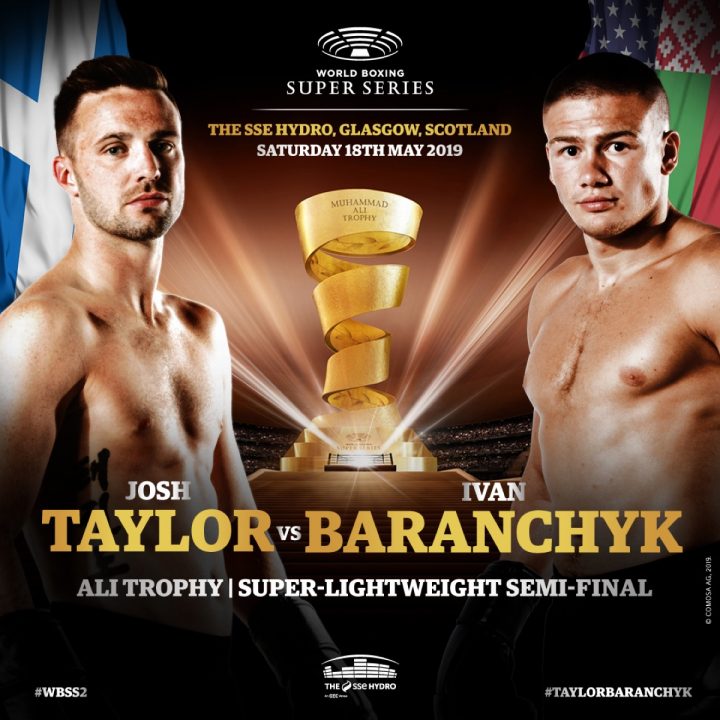 By Tim Royner: The May 18 fight between IBF light welterweight champion Ivan Baranchyk and unbeaten 2012 Olympian Josh Taylor will most likely take place on May 18, according to Taylor’s trainer Shane McGuigan. In an interview with Boxing Social, McGuigan says he’s “90 percent” certain that the Baranchyk vs. Taylor fight will go down on the 18th of May.

If Baranchyk doesn’t back out, Taylor is going to have a real fight on his hands on May 18. Hopefully, the judging is quality and not the odd scores that were turned in for Taylor’s fight against Viktor Postol in Glasgow last June.

Baranchyk (19-0, 12 KOs) and Taylor (14-0, 12 KOs) are scheduled to meet in the semifinal of the World Boxing Super Series 140 lb tournament on May 18 at The SSE Hydro, in Glasgow, Scotland. However, there’s been talk that Baranchyk, 26, might pull out of the tournament due to him being unhappy with the money problems. McGuigan says that the International Boxing Federation ordered a purse bid, and the WBSS won the purse bid. As such, if Baranchyk chooses to pull out of the fight with Taylor, 28, then he could be stripped of his IBF light welterweight title.

If Baranchyk chooses to pull out of the WBSS tournament, then the next highest ranked contender that will likely be asked to step in to replace him as the opponent for Taylor is #4 IBF Akihiro Kondo (31-8-1, 18 KOs). If Kondo, 34, rejects the offer, then the IBF will likely work down the list of the following contenders in their top 15:

What would look really bad is if the WBSS tournament replaced Baranchyk with 35-year-old Scottish fighter Ricky Burns (43-7-1, 16 KOs) in order to setup a fight that would sell a lot of tickets at The Hydro in Glasgow. Taylor vs. Burns would be a big deal for Scotland, as it would setup a fight between two of their biggest stars, but the fight wouldn’t be seen as good one for fight fans outside of that part of the world. Even though Burns is a former three division world champion, he’s seen as being over-the-hill at this point, and he’s lost two out of his last four fights. Burns isn’t ranked in the top 15 at light welterweight, so it would be odd for him to be fighting Taylor for the vacant IBF 140 lb title if Baranchyk is stripped of his title by the sanctioning body for not fighting Taylor. Burns was a great fighter during the best years of his career, but he’s been beaten five times in the last five years with two of the defeats coming in the last two years to Anthony Crolla and Julius Indongo. Burns, 5’10”, is the same height as Josh Taylor, but he’s not a natural light welterweight like him, and he’s not a big puncher. Burns started his career out at super featherweight, and he’s always been a guy that has won his fights by using high volume punch output, and his boxing ability to capture world titles at 130, 135 and 140.

You can argue that Taylor would beat all of them with ease. The IBF might as well just give Taylor their IBF light welterweight title if Baranchyk vacates. It would be a wrestling tournament type situation where you win by forfeit if your opponent is unable to compete. Taylor being given the IBF title, which probably won’t happen, but it would make a lot of sense. That’s would’t be a good way for Taylor to advance into the final of the World Boxing Super Series though to face the winner of the Regis Prograis vs. Kiryl Relikh fight. If Taylor’s management are able to get the WBSS final to take place in Glasgow, Scotland, it would give him a huge advantage over the winner of the Prograis-Relikh fight. The scoring for Taylor’s recent win over Viktor Postol in Glasgow was embarrassingly bad in the eyes of a lot of boxing fans. Taylor appeared to barely scrape by with a 12 round decision win, and yet the judges scored it for Taylor by the scores, 117-110, 118-110 and 119-108. With scoring like that, the winner of the Prograis vs. Relikh fight might need to knock Taylor out in order to win the fight if it takes place in Glasgow. It would be better for the WBSS to make sure the final of the tournament takes place in a neutral venue in order to avoid potential controversial ending. The last thing the tournament needs is a controversial decision where the home fighter is given a victory that the boxing public doesn’t agree with.

Taylor defeated unbeaten Ryan Martin (22-1, 12 KOs) by a seventh round knockout in the quarterfinal of the WBSS tournament on November 3 in Glasgow. Martin looked unskilled, and nowhere ready to be fighting at this level. For his part, Baranchyk wore down and stopped previously unbeaten Anthony Yigit (22-1-1, 7 KOs) in the seventh round on October 27 in their quarterfinal match in the WBSS tournament at the Lakefront Arena, in New Orleans, Louisiana. Yigit’s left eye was closed from the heavy shots from Baranchyk, which resulted in the ringside doctor having the fight stopped.

Boxing » News » McGuigan 90% sure Josh Taylor vs. Ivan Baranchyk will happen on May 18