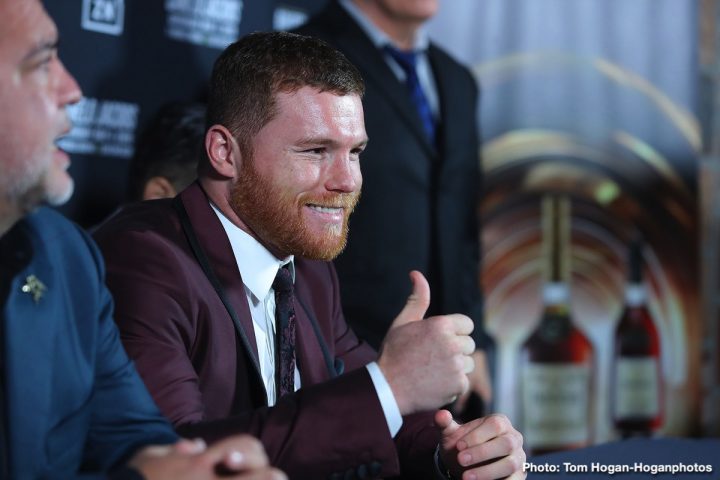 By Aragon Garcia: Danny Jacobs is going to have be very watchful of the punching power Saul Canelo Alvarez will be bringing to the ring in their fight on May 4 on DAZN. In video of Canelo working out on Wednesday, he looked devastatingly powerful, and he appears to be training for a knockout.

Jacobs (35-2, 29 KOs) is going to have to forget about getting into a slugging war with Canelo, because he’s looking even more powerful than Gennady Golovkin. Canelo wants to knockout Jacobs and leave no doubt in the minds of the boxing public who the better fighter is between them.

Canelo (51-1-2, 35 KOs) will have his WBA/WBC middleweight titles on the line against IBF champion Jacobs on May 4 at the T-Mobile Arena in Las Vegas, Nevada.

The power of Canelo is going to greatly limit what Jacobs can do against him. Canelo is still wearing a knee brace on his left knee that is cause for concern. Will his knee hold up during the Jacobs fight?

The way that Canelo is punching right now, he’s going to take the fight to Jacobs on May 4, and look to wear him out with body punching. Jacobs will need to stay on the move if he doesn’t want to wind up like Canelo’s last opponent Rocky Fielding. Jacobs has a lot of ring smarts, and he’s a good mover.

If Jacobs stays away from Canelo, he might be able to avoid getting taken out with body shots. Canelo will have studied Jacobs’ fight with Dmitry Pirog from 2010 to use that as a blueprint in how to beat him with pressure. Pirog walked Jacobs down in each round, and took him out in the fifth round after trapping him against the ropes.

Canelo looks like he’s been hitting the weights with his upper body. The sound of Canelo’s shots when he was working the mitts with his trainer Eddy Reynoso was like firecrackers going off each time he would land. Canelo’s power has looked greatly improved since his second fight with Golovkin (38-1-1, 34 KOs) last September. Canelo looked like the more powerful puncher of the two in that fight, and he had the GGG’s face badly swollen and marked up at the end of the contest. Canelo’s power looked remarkable against Rocky Fielding in knocking him out in the third round on December 15.

It’s important that this fight end in a conclusive way. The boxing fans don’t want to see a controversial decision. Whoever wins the fight, it would be best for it to be a knockout.

The way Canelo looks right now, he’s good enough to beat the best at super middleweight and unify the division if he wants to. He can probably move up to light heavyweight and start winning titles in that weight class as well. He’s got the upper body strength, hand speed, punching power and defense to beat the top fighters at 175. Dmitry Bivol might give Canelo problems with his technical boxing skills, but he can be hurt as we saw in his last fight against Joe Smith Jr.