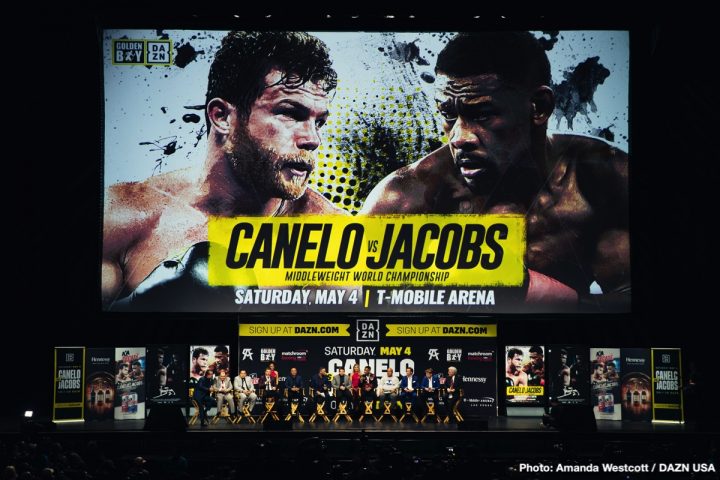 By Dan Ambrose: Golden Boy Promotions are expected to announce the undercard soon for the May 4 Saul Canelo Alvarez vs. Daniel Jacobs card, but here are some of the fighters that are expected to be on the DAZN card at the T-Mobile Arena in Las Vegas, Nevada: David Lemieux, Vergil Ortiz Jr., and Pablo Cesar Cano.

There’s exactly one month to go before the Canelo vs. Jacobs unification fight on May 4, and the full undercard still hasn’t been officially announced. Lightweight contender Ryan “Kingry” Garcia (18-0, 15 KOs) made it known last Saturday night that he wants to be added to the card, but nothing is definite about that. The problem with adding the young 20-year-old Garcia is Golden Boy will need to carefully select the right opponent for him to fight. Since they want to have Garcia fight a step up level fighter from his last fight against Jose Lopez last Saturday, they need to find someone better, but not too much of a step up. They obviously don’t want “Kingry” Garcia to get beat or to be made to look bad.

Here are the fighters that will on the undercard against TBA opponents:

– David Lemieux: Former IBF middleweight champion Lemieux will be fighting at 168 due to his problems making weight at middleweight. Lemieux (40-4, 34 KOs) is someone that Golden Boy plans on matching against Canelo in the near future. For that reason, it’s important that they don’t put the 30-year-old Canadian in with someone that potentially beat him from the super middleweight division. Lemieux, 5’9″, is new to the division, and he’s not very tall compared to other guys like 6’3″ Callum Smith and 6’2″ David Benavidez. Golden Boy will likely pick out a fringe contender from either the 160 or 168 lb weight classes for Lemieux to face. it clearly won’t be a highly ranked contender from either of those divisions. Lemieux has been out of action since he knocked out Gary “Spike” O’Sullivan in the first round on September 15.

– Vergil Ortiz Jr: The unbeaten light welterweight prospect Ortiz (12-0, 12 KOs) has the kind of talent that would enable Golden Boy to match him against a tough opponent for the May 4 card. The 21-year-old Ortiz could fight for a world title in 2019, but before he does that, he’ll likely be matched against a talented fighter on the Canelo-Jacobs card. Although Ortiz is just a year older than the 20-year-old Ryan Garcia, he doesn’t get mentioned as much for some reason. Ortiz appears to have a much better chance of panning out than Ryan does as a world class pro, but he hasn’t been hyped as much by Golden Boy. The Texas native Ortiz has looked great lately in knocking out Juan Carlos Salgado, Jesus A Valdez Barrayan, Roberto Ortiz and Jesus Alvarez Rodriguez.

– Pablo Cesar Cano: Light welterweight Cano (32-7-1, 22 KOs) is coming off of a first round knockout victory over former three division world champion Jorge Linares on January 18. Cano looked very powerful in that fight in knocking Linares down three times in the fight. The victory got Cano pushed to #2 in the World Boxing Council’s rankings at 140. There’s no word in how tough Golden Boy will match Cano. He’s already been thrown in the deep end from the start of his career in being matched early on against Erik Morales, Paulie Malignaggi, Shane Mosley, Fernando Angulo, Juan Carlos Abreu, Alan Sanchez, Fidel Maldonado Jr. and Marcelino Nicolas Lopez. Cano lost to all of those guys. His promoters have done him no favors, but perhaps he’s turned things around finally with his knockout win over Linares. If Golden Boy matches Cano tough on May 4, it’ll be interesting to see if he can handle being put in with a good opponent without reverting back to his former struggling self. Cano beat the highly talented Ruslan Madiev last September by a fifth round technical decision.

Those are all solid fighters that will help make the Canelo vs. Jacobs undercard an interesting one depending on the opponents that those guys face. If those three fighters are matched against guys that have no chance of winning, then it won’t do much to make the card a memorable one.

Possible other fighters for the Canelo-Jacobs card:

– Ryan Garcia: It was thought that it would help Ryan land a spot on the Canelo-Jacobs card if he won his fight early last Saturday against Jose Lopez Jr., and he did his part by knocking him out in the second round. Never the less, it’s still up in the air whether Golden Boy Promotions will include Ryan on the card. They would have to find the perfect opponent for the young Garcia to fight on one month’s notice, and that’s not easy to do. If Ryan was a young Yuriorkis Gamboa type talent, then Golden Boy could pick out a highly ranked lightweight contender and match him up against that person. Garcia is a good fighter, but he’s really young, and he’s now shown the type of ability that a more well-rounded fighter from a lengthy amateur background would display. Garcia’s amateur career is taking place at the pro level.

For Canelo Alvarez, he’ll be making his second fight of his 11-fight contract with DAZN after signing with them recently. In Canelo’s first fight of the contract with DAZN, he stopped WBA ‘regular’ super middleweight champion Rocky Fielding last December. The boxing public criticized Canelo for taking on Fielding, a fighter considered to be the weakest of the champions at super middleweight. The fans felt that if Canelo was going to move up to super middleweight to go after one of the champions, then he should have targeted WBA Super World champion Callum Smith, who is viewed as the best fighter in the division. Canelo opted for an easier fight against Fielding, and it paid off with him knocking the guy out.