Crawford/Khan: What we really learned 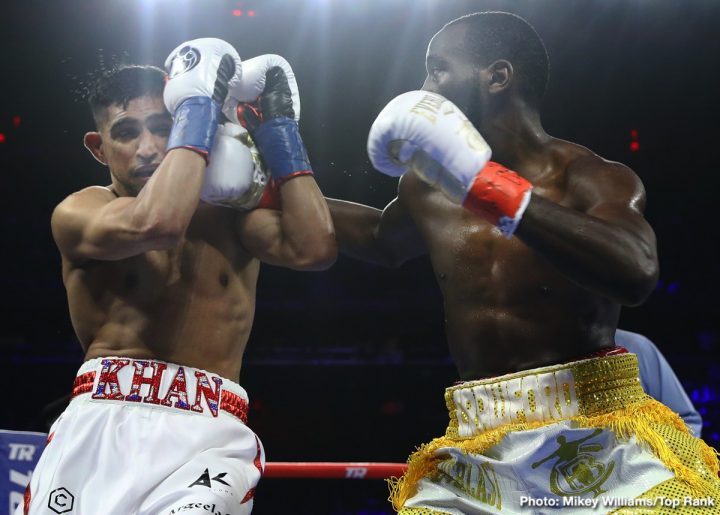 By Darren Paradise: This was a fight the boxing world had hoped was going to ask a question or two of multi-weight world champion Terence “Bud” Crawford. There were questions asked, just not of Crawford, they were instead asked of Amir Khan and he failed abysmally, disappointing millions of fans around the world.

Khan is well known for not having the greatest of chins but until this point his heart has never been questioned. It was assumed he has that warrior mentality of leaving it all in the ring, needing to be saved only from his own bravery. Boy we were wrong.

It’s been 15 years since the great Olympian Mario Kindelan was paid to come over to the UK from Cuba and lose to Amir Khan in a return of their gold medal match in Athens. A grand launch of what was intended to be a glorious career to exceed the heights of any British boxer before or after. A manufactured superstar aiming to transcend boxing especially in the UK. Due to his suspect chin it never quite played out that way but with his God given talent he made it to the higher echelons of the sport and he did pass the odd “gut-check” here and there namely against Marcos Maidana who talent wise was not on Khan’s level but did have the heart and determination of a warrior to make it an evenly matched contest.

Boxing is all about levels and on this night, Khan found out he is not on Crawford’s level and make no mistake when this became apparent, he wanted out before the inevitable crushing knockout put paid to any potential match-up with Kell Brook. I remember my wife watching the TV series “I’m a celebrity get me out of here” she stated several times “Amir Khan is afraid of his own shadow” he had failed numerous tasks and let his team down through fear. Defending him I informed her that in the ring he is a “different animal”, she wouldn’t have that, so we agreed to disagree, now here I am having to eat humble pie. Once more, she is right, I am wrong!

Welterweight warriors of years gone by such as “Thunder” Gatti, “Chico” Corrales and the underrated “Desert Storm” Bradley have all found themselves in the same predicament Khan found himself in this past Saturday night and all had to take their licks, but these guys were cut from a different cloth they knew no quit. Hundreds of journeymen week in and week out are overmatched against young, hungry up and coming prospects having to last the distance so they can be in that ring again within a couple of weeks just to keep food on the table. They must be shaking their heads in disbelief.

In an age where unbeaten records are protected, and boxing politics prevent the real competitive fights. There are many “elite” level fighters who may never get the opportunity to prove themselves in the mettle department. There are even fighters such as Floyd Mayweather who unfortunately was “too good” and never got to show the world what he had deep inside himself.

How you react when your up against adversity and conduct yourself in defeat will eventually define you in this unforgiving sport.

What now for Khan? I am sure he will go onto a meaningless multi-million-dollar showdown with Kell Brook.

For Crawford after another faultless and dominant performance the quest for pound for pound supremacy continues.


« Khan: “I didn’t quit” against Crawford

Atlas: Crawford vs. Khan was NOT good for boxing »