Amir Khan vs. Kell Brook: The fight that could have been a blockbuster 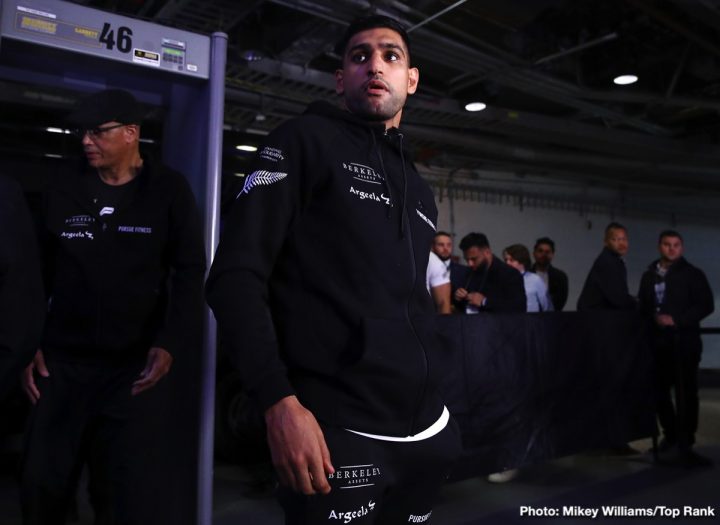 The money and the attention a fight between these two British fighters could have made four to six years ago is hard to fathom. Now it’s pointless for them to fight each other because they’re viewed as relics from a bygone era, and no longer anywhere near their prime.

Khan led the way with a foolhardy move up to middleweight in 2016 in challenging WBC champion Saul Canelo Alvarez in a fight that left him unconscious on the canvas in the sixth round. Khan wouldn’t fight again for two years after that loss. Brook decided to follow Khan’s lead by moving up to middleweight to challenge IBF/WBA/WBO 160 lb champion Gennady Golovkin in September of 2016.

It was four months after Khan’s devastating knockout loss to Canelo. Brook suffered a broken eye socket in losing to Golovkin by a fifth round. Like Khan did with Canelo, Brook fought well and gave his bigger, stronger opponent Gennady all he could handle for the first four rounds before his eye injury was too much for him to handle and he had to bow out. Brook didn’t technically quit, but he stopped throwing punches in the fifth round, and left his trainer no other choice but to stop the fight in order to save him.

Both fighters have been dealt terrible defeats at the hands of bigger, and more highly skilled fighters in recent years. Although Khan, 32, and Brook are bout the same age, and just a year older than Terence Crawford, they’re not at the same level as him at this point. They’re going downhill, and they’ve been heading downwards for quite some time.

Brook was beaten by a superior welterweight in an 11th round stoppage loss against Errol Spence Jr. in May 2017 in Sheffield, England. Last Saturday, Khan was stopped by the better skilled Crawford in New York City. Brook and Khan both quit. To be sure, Khan maintains that he DIDN’T quit against Crawford, but it’s pretty clear he did. When Khan spoke to his trainer Virgil Hunter in the sixth round after being hurt by a low blow, he could have told him he was OK, and that he would be fine after a five minute rest. Khan could have stopped Hunter when he motioned to the referee to halt the fight, but he didn’t do that. Khan was passive, and put it on Hunter to do the job for him to get him out of the fight. Hunter did the dirty work, while Khan was able to save himself from being overly criticized because it wasn’t him to stopped the fight.

We just saw the remnants of Khan’s once promising career sent into oblivion last Saturday night with him losing to WBO welterweight champion Crawford (35-0, 26 KOs) by a sixth round stoppage on ESPN pay-per-view at Madison Square Garden in New York. It was a game effort by Khan, but he didn’t have it in him to get the job done against the highly skilled pound-for-pound fighter Crawford.

Brook is now looking to get another big fight against one of the elite level fighters. He wants to fight Crawford, Keith Thurman, Shawn Porter, Manny Pacquiao, Danny Garcia or Spence.

“Keith Thurman, I’d love that fight. They’re all hard at this level,” Brook said about the elite fighters. “I like the Crawford fight now. everyone is saying he is this and he is that over in America. He’s the same age as me. I’ve got with size and with style. I’ve been in with the best. I’m ready to go. Eddie [Hearn] already knows [that I’m interested in fighting Crawford]. I’ll fight anyone. I jumped in with Golovkin. I love it here [Madison Square Garden in New York]. The atmosphere was good. I like the Barclays Center,” Brook said.

It’s possible that Brook could get the fight against Crawford if the Top Rank fighters’s promotes are unable to set him up with an important fight. Brook would be a good fight for Top Rank to put on with Crawford. It might not be a PPV worthy match-u given the the U.S boxing fans don’t know who Brook is, but that wouldn’t stop Top Rank from putting it on PPV anyway.

“Kell is only going to get focused in his career when he’s up against it, and having a tick-over fight or a fight he’s not up for at this stage in his career, as he showed in his last fight, will only result in poor performances,” Brook’s promoter Eddie Hearn said to Fighthype. “He just wants a big fight, whether that’s Crawford…I just think he wants to dive into the monster fights. He’s at the stage in his career where he wants the biggest payday possible. He wants to leave the sport, as many fighters do, financially in a good place,” Hearn said about Brook.

If Hearn can get Brook a fight against Crawford, it would be an interesting fight for the boxing public in the U.S. If not him, then someone like Manny Pacquiao or Danny Garcia.

“He’s a quitting b—-,” Brook said about Khan. “You get five minutes to come around. He looked tired. He didn’t want it no more. He was getting beat in every department. It was a matter of time. In the first round, he was on the canvas. He [Crawford] was cool, calm and relaxed. He did what he was supposed to do. He showed that he’s an elite fighter. The timing was very quick for Crawford,” Brook said.

Brook is nothing like Crawford with the way he fights and what he has left in the tank. If Brook fights Crawford right now, he’d be in danger of quitting or being stopped outright. Had the two fought each other in 2013, Brook would have had a good chance of winning.

Spence might be too big and too physically strong for Crawford to deal with. Spence fight the same way Crawford can, but he can also walk down his opponents and slug it out with them.