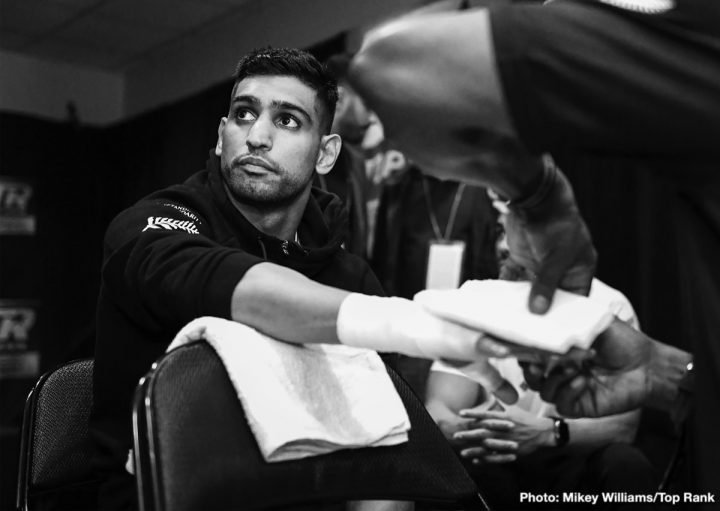 By Charles Bruns: Amir Khan doesn’t plan on hanging up his gloves after his sixth round stoppage loss to WBO 147 pound champion Terence Crawford in New York. The former IBF/WBA light welterweight champion Khan (33-5, 20 KOs) had the deck stacked against him going into the contest against the highly talented Crawford (35-0, 26 KOs), who many boxing experts rate as the bet fighter in the welterweight division and possibly all of the sport today.

Khan questioned whether Crawford used the low blows as way to win the fight. Khan said he spoke to the referee before the bout to let him know to watch for low blows from Crawford. Khan said he was hit by Crawford low earlier in the fight in addition to the one that ended it in the sixth round. The timing of the low blow in the sixth came when Khan seemed to have Crawford figured out, and was doing much better in the fight. Crawford looked like he was tiring from carrying around all the extra muscle that he’d packed on for the fight, and Khan was starting to catch him repeatedly with good shots that snapped his head back each time he would land.

Peeing blood. The shot was low. The fight was just getting interesting. Well done team Terrance. I never quit, I rather get knocked out cold then quit. Good night. Thank you New York. pic.twitter.com/StsfiU3s4k

Would Crawford resort to using low blows to try and weaken or injure Khan enough to win the fight? Khan has his suspicions.

“There were other low blows in the fight. I don’t know if it was a strategy,” Khan said. “I remember telling the referee before the fight in the changing rooms that he is going to throw low blows,” Khan said.

Crawford was getting the better of Khan until the fifth round. For him to use low blows to try and turn things around would be bad. There’s no way of knowing whether Crawford threw the low blow deliberately or not. If Crawford starts throwing low blows in his future fights when things start looking bad for him, then one might draw a reasonable conclusion that he’s intentionally using these tactics to gain an advantage. But as of now, there’s too little evidence to show that Crawford hit Khan low to nullify his success. The timing of Crawford throwing a low blow in the sixth looks bad, as Khan was starting to do well at that point in the fight. If the bout had continued in the direction it was going, Khan might have won the fight.

After the fight, Khan made it known that he doesn’t want to retire from boxing on a sour note like this. He said he’ll sit down with his family and decision where to go from here with his career. Khan has the chance to fight for big money against former IBF welterweight champion Kell Brook. Further, there’s also the possibility he could get a fight against one of the big five Premier Boxing Champions fighters in Manny Pacquiao, Errol Spence, Danny Garcia, Shawn Porter or Keith Thurman.

The way the fight ended looked suspect in the eyes of many boxing fans, who say that they believe that Khan quit. The networks might be reluctant to put on a fight involving Khan if they believe that he quit to get out the fight. Will one of the bigger name welterweights want to fight Khan after what happened last Saturday? Probably not.

Even Kell Brook might want to shy away from fighting Khan for the time being. Ideally, Khan needs to take on two or three contenders, show that he can beat them, and try put the Crawford fight behind him. Aside from that, it might be asking too much of the bigger name welterweights for them to want to get mixed up with a fight against Khan right now. There’s nothing for guys like Thurman, Danny Garcia, Porter, Pacquiao and Spence to gain from fighting Khan right now. Garcia is coming off of a win over fringe contender Adrian Granados last Saturday night. Garcia needs to take on one of the better fighters in the division right now rather than for him to face a guy like Khan with him coming off of a sixth round TKO loss to Crawford.

“I don’t want to end my career like that,” Khan said to The Independent. “I definitely don’t. I’m one of those fighters, I’d rather get knocked out. I couldn’t think straight when I was hit with a shot like that.”

There was no doubt that Khan looked hurt, and in distress moments after the low blow. If this had been a body shot, the fight would have been stopped on the spot. In this case, Khan was being asked to recover from a low blow that hurt him enough for him to still feel sick after the fight.

Khan came out cold in the first round, and paid the price in getting knocked down by the 31-year-old Crawford. After struggling with Crawford’s tricky, switch-hitting, counter-punching style in the first four rounds, Khan seemed to have figured out how to beat him, and he did well in the fifth and sixth rounds. However, Khan’s night ended in the sixth, courtesy of a low blow from Crawford. Although Crawford failed to admit initially that he had hit Khan low, it was there for all to see from the replay of the incident in the 6th round that he had indeed hit him low

Referee David Fields gave Khan, 32, five minutes to recover from the low blow. Khan’s trainer Virgil Hunter then huddled with him, and he determined that his fighter was too hurt from the low blow to continue fighting. Given that Khan couldn’t continue, the referee gave Crawford a knockout victory. The large Madison Square Garcia crowd of over 14,000 fans weren’t pleased, as they booed both fighters. The boos weren’t just aimed at the injured Khan. There were clearly boos aimed at Crawford too for throwing the low blow in a fight that he was well in control of at the time of the stoppage in the sixth round. The fight was stopped by referee Dave Fields at 0:47 of round six.

At the post-fight news conference, Khan let Crawford and the media knock that he had been hit “in the balls” after being questioned why he hadn’t continued fighting. Khan maintained that he would have rather have gone out on his shield by being knocked out than for him to quit. The look on Khan’s face suggested that he was dead serious about that. Since it wasn’t Khan who asked for the fight to be stopped, Crawford and the media couldn’t keep talking about the same subject for long without looking like they were in search of an angle for the stoppage that didn’t match the reality of the fight.

The knockout loss for Khan was his fourth of his 14-year pro career. His previous three stoppage losses came at the hands of Breidis Prescott, Danny Garcia and Saul Canelo Alvarez.

Khan said this on his social media site on Saturday:

“The last 12 months have been brilliant. After a long layoff with hand injuries I fought 3 times. Lo Grego, Vargas and Crawford. Thank you for all the support and motivation everyone. Will have a nice break and with my family and friends. I will announce something soon.

Khan definitely has options available to him for interesting fights for good money. A pay-per-view match against Brook, 32, would likely be the best paying of the potential fights for Khan on the horizon. Brook came to the fight last Saturday night, and said afterwards that he would like to fight Khan. Brook also said that he’s interested in facing Crawford.

Unless Khan makes a move soon to make a fight with Brook (38-2, 26 KOs), he might lose out on that one to Crawford, who needs another big name opponent for his next title defense. Top Rank doesn’t have many options unless they have Brook fight someone from the 140 or 154 lb divisions. They’re not going to be able to match Crawford against one of the Premier Boxing Champions elite level welterweights. Crawford ruled out moving up to 154 for his next fight. If Crawford doesn’t face a 140 or 154 pound fighter in his next bout, then he’ll likely fight one of these two guys: Luis Collazo or Egidijus Kavaliauskas. Those aren’t big names.

“It does upset me that people will call me a quitter because I know deep, deep down I’ve never been a quitter,” Khan said. “But definitely, man, you’ll definitely see me again.”


« Amir Khan vs. Kell Brook: The fight that could have been a blockbuster

Tererence Crawford: Who’s next for him? »