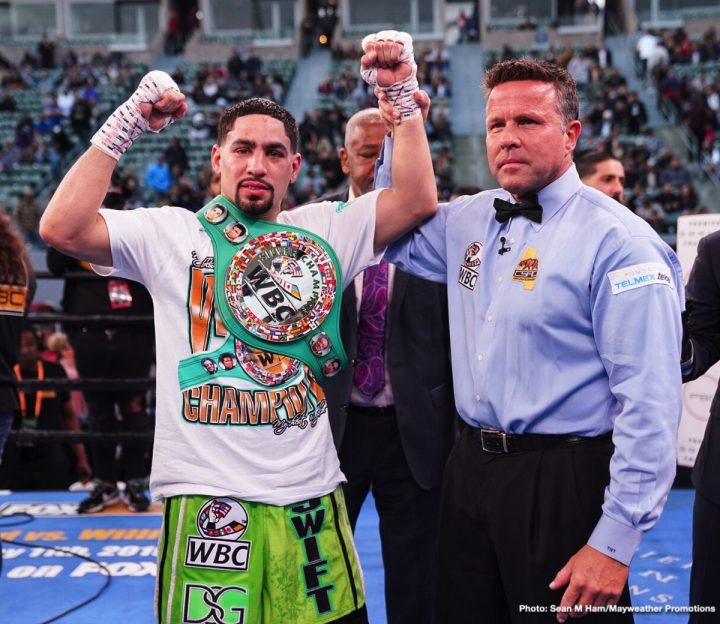 By Mark Eisner: Danny Garcia (35-2, 21 KOs) says he’s ready to take on the big dogs in the welterweight division after getting his tune-up fight out of the way in beating Adrian Granados (20-7-2, 14 KOs) by an impressive seventh round knockout last Saturday night on Premier Boxing Champions on Fox & Fox Deportes at the Dignity Health Sports Park in Carson, California.

Garcia put the 29-year-old Granados down on three separate occasions in the fight before it was waived off in the seventh. This was the first career knockout loss for Granados. The size and power advantage for Danny Garcia was too much. Granados looked like a small light welterweight, but not one of the powerful ones.

There’s some big punchers at 140 right now. But at 147, Granados doesn’t belong in this division, and definitely doesn’t belong in there with a guy like Garcia. It doesn’t matter that Garcia was recently beaten twice by Shawn Porter and Keith Thurman. He’s head and shoulders above the likes of Granados, as we all saw last Saturday night.

Garcia still has a shot at getting a fight against Manny Pacquiao. The Filipino star held off making his decision on his next fight until he got a chance to see the Garcia vs. Granados match. Pacquiao originally said he would fight Errol Spence, but then it looks like he changed his mind. Keith Thurman was mentioned as a strong possibility to face Manny next. But he might having second thoughts about that one. In that case, Garcia is a good safe third choice. Most boxing fans would rate Garcia behind Spence and Thurman. Pacquiao can increase his chances of winning if he faces Garcia rather than Thurman, but it still won’t be easy. Garcia is a big puncher, and if Pacquiao’s wheels aren’t working on the night, he’ll get chopped down like Granados did.

After the fight was stopped, Garcia, 31, made it known that he wants Manny Pacquiao, Keith Thurman, Errol Spence Jr. or Shawn Porter next. Garcia has a really good chance of getting one of those guys to bite. It might not be WBC welterweight champion Porter though, as he’s expected to face IBF belt holder Spence (25-0, 21 KOs) in a unification fight at the end of summer.

“I had to make a statement and knock him out. I had to be the first man who stops him and I got it done,” Danny Garcia said. “I hope I didn’t scare Manny Pacquiao away. I’d love a rematch with Shawn Porter or Keith Thurman, or a fight with Errol Spence Jr. I’m back!”

Pacquiao, 40, is looking to setup a fight against Thurman right now. There’s no gain for WBA ‘regular’ welterweight champion Pacquiao in facing Danny right now, considering that he’s beaten twice in his last four fights. Garcia’s record since 2017 is 2-2. That’s not the type of record that suggests that he would be a good option for Pacquiao to fight, because he needs to face fighters that he’ll get credit from the boxing public for beating. If Pacquiao beats Garcia, the fans will point out quite correctly that Thurman and Porter already beat him recently. The only thing Pacquiao can gain from defeating Garcia if he knocks him out. Thurman and Porter both beat him. There’s no point in those guys fighting Garcia again, due to his lack of wins over quality fighters since them. Garcia’s two victories in the last two years have come against lower level fighters Granados and Brandon Rios. For it to be worthwhile for Pacquiao, Thurman, Spence or Porter to face Garcia, he should at least show that he an beat a good fighter like Yordenis Ugas ate the minimum. If not Ugas, then someone like Kell Brook, who says he’s interested in fighting Garcia.

“I’ve said it before, when Danny Garcia is at his best, nobody can beat him,”, Garcia said. I had gotten a little comfortable in the past, but I put my 110 percent into this fight and when I do, I beat everyone,” said Garcia.

Garcia is getting a little carried away in giving himself praise for beating Granaos. This was a B-level guy Garcia beat last Saturday night. Granados is probably better than Brandon Rios, but not much better. Rios is Garcia’s only other win in the last two years. Garcia is becoming like Amir Khan with the way he fails when he steps it up against the elite level fighters. A more accurate comment from Garcia would be, when he’s at his best, he can beat guys like Rios and Granados, but he CAN’T beat the likes of Porter and Thurman obviously. Garcia is going to get a big regardless, but it’s too bad that he didn’t fight someone a little a better than Granados for him to get that big shot. I mean, Granados was beaten recently by Adrien Broner and Porter. Granados also has losses to Felix Diaz and Brad Solomon. We’re talking about a good gate keeper level guy, but not one of the elite level fighters. A good fight for Granados would be for him to fight Rios. Those guys are about the same. That’s the level that Granados is at, which is why it’s difficult for one to get excited about Danny Garcia right now. He’s talking about he’s “back,” but how can he say that when he’s fighting a guy at the level of Granados? Garcia is back, yeah, but at the level of fighting another Brandon Rios type fighter. For Garcia to be back in the real sense against the elite level guys, he needs to at least show that he can beat a fighter like Ugas, who would have a very good chance of beating. Ugas would give Garcia a lot to think about with his boxing skills. We already know what Thurman and Porter could do against Garcia. Spence looks completely out of Garcia’s class. That would be a mismatch, especially if Spence went into his bulldozing mode that he normally uses. It’s safe to say that Danny wouldn’t fight Spence.