Spence vs. Garcia fight day weigh in results and prediction 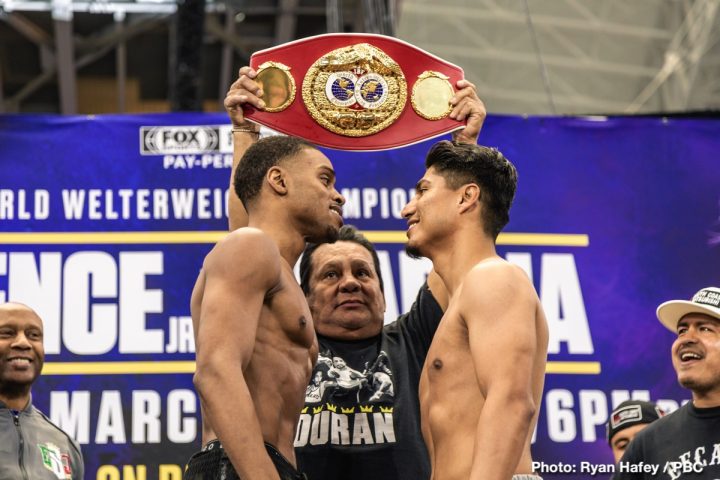 By Ismail Chunara: This morning Mikey Garcia and Errol Spence Jr. stepped on the scales again for the IBF fight day weigh in. Both boxers are not allowed to weigh more than the 10lbs rehydration limit. Mikey Garcia weighed in at 152lbs and Spence weighed in at 155.5lbs. Remember yesterday Garcia tipped the scales at 145 ½ lbs (a career high) and Spence was 146 ¼ lbs.

Spence estimates come fight time to be in the region of 160lbs. Mikey estimated he would be 150lbs, which he says is his usual walking around weight. Garcia is already 2lbs heavier than he anticipated so it will be interesting to see if he does hydrate a bit more. Garcia doesn’t want to be too heavy on his feet as this could slow his foot movement down. Mikey’s going need to be active and moving all night to stay away form Spence’s power shots and to keep Spence of him.

This is a very interesting fight and had all the hardcore boxing fans impatiently waiting for that opening bell tonight. Legends like Sugar Ray and Mike Tyson are predicting a win for Mikey.

Mikey Garcia is definitely daring to be great. Spence thinks if he beats Mikey that could make him no.1 p4p in the world. I disagree. If Spence was moving up two weight classes and fighting a beast a middleweight, say the likes of Saul Canelo Alvarez, Gennady ‘GGG’ Golovkin or Daniel Jacobs, then yes, he could potentially be no.1 p4p in taking the same risk as Mikey is. But Spence isn’t. Mikey is.

Mikey in my opinion does have the chance to become no.1 fighter on the planet tonight with the huge risk he is taking. Many boxing fans say Vasyl Lomachenko and Terence Crawford are no.1 and no.2 p4p. However, I don’t see them taking huge risks like this. So there’s no doubt if Mikey wins he will be the no.1 p4p.

I see a lot of similarities between the Deontay Wilder vs. Tyson Fury fight compared to this fight. A lot of people and pundits wrote Fury off. They all said he’ll be knocked out and destroyed. However, Fury’s superior movement and boxing skills kept him out of trouble for most of the fight and most say he won that fight. Mikey will need the same heart, determination and game plan that Fury used. I know Spence is not wilder and Mikey is not Fury, but a lot of similar factors there.

My heart is saying Mikey and my brain is saying Spence. My head says Errol’s height, size, reach, power, weight advantage should be too much for Mikey. However, I’m going out on a limb here and am going with a Mikey Garcia points win tonight. I feel the stage is set for Mikey to become boxing’s undisputed p4p in beating Spence Jr tonight. We all love an underdog story and things couldn’t be more set up for Mikey tonight.

I think Mikey’s experience, movement, ring IQ will be the decisive difference. Mikey’s already a 4 weight world champion and with the experience will be in my opinion victorious tonight.

Has Mikey bit of more than he can chew? Has Spence made a big mistake in agreeing to fight Mikey? All will be answered tonight.