Pacquiao to be ringside for Errol Spence vs. Mikey Garcia tonight 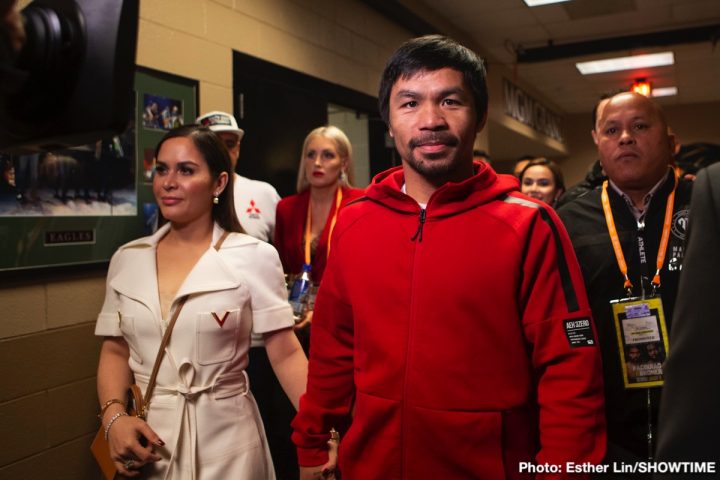 By Dan Ambrose: In a clear sign that Manny Pacquiao will be facing the winner of tonight’s Errol Spence Jr. vs. Mikey Garcia fight, he’ll be ringside to watch the contest at the AT&T Stadium in Arlington, Texas.

Pacquiao (61-7-2, 39 KOs) has made it clear recently that he wants to fight the winner of the Spence vs. Garcia contest, and he has a great chance of getting his wish unless the two face each other in a rematch.

Pacquiao, 40, has competition vying for the shot at the winner of the Spence-Garcia fight tonight. WBC welterweight champion ‘Showtime’ Shawn Porter has made it known that he’s going to enter, or at least try to, the ring after the Spence vs. Garcia fight to call out the winner on national television. It’s going to look incredibly bad though if there’s no interest on Spence or Garcia’s part in fighting the 31-year-old Porter (30-2-1, 17 KOs), who is coming off of a major controversial 12 round split decision victory over Yordenis Ugas last weekend. With that kind of controversy following Porter around, the Spence-Garcia winner might want to stay as far away from him as possible. Even if Porter wasn’t being followed by controversy, he would still be a far less interesting opponent for the Spence vs. Garcia winner.

Spending some time with Senator ⁦@mannypacquiao⁩ here in Dallas. He will be ringside tonight for #SpenceGarcia pic.twitter.com/NRpr2YfBnn

There are some fans that don’t want Pacquiao to take a risky fight fight with the the bigger, stronger and younger Spence, as they see it going badly for the Filipino star with him suffering another knockout loss. Spence, 5’9 1/2″, would be a really hard fight for Manny. However, it’s a match that would make both fighters a great deal of money, as long as Spence looks good tonight in beating Mikey Garcia. That’s the key. Spence needs to get through this fight against Mikey, win, look good, and then face Pacquiao in the summer in a pay-per-view fight.

Pacquiao was knocked out in the sixth round by Juan Manuel Marquez in 2012. Pacquiao has suffered two losses since then in losing to Floyd Mayweather Jr. by a 12 round decision in 2015, and then losing a controversial 12 round decision to Jeff Horn in an ill advised fight in Brisbane, Australia. Pacquiao has won his last two fights in beating Lucas Matthysse and Broner. Pacquiao had hoped that Floyd Mayweather Jr. would come out of retirement to face him in a rematch, but that doesn’t look like it’s going to happen. Even though Mayweather could make massive money in a second fight with Manny, he’s not expected to come out of retirement to fight him again. Mayweather can still make money with his exhibition fights right now.